Closing out my three part series on our trip down to Historicon, just some final thoughts more than anything. I got sidetracked by my new airbrush....can you blame me?!! All together it was a great event, the Flames of War Nationals certainly began a little later than expected, but Dave did a great job running it solo and we look forward to him running Canadian Nationals at the end of the month. This brings me full circle all the way to this weekend, where we had a holiday and as usual it was time for some gaming out at my place in the 'War Room'. I was getting tired of calling it the shop, not much work get's done out there....it's more of a fun place to chill out and listen to Split Infinity Radio.They're a great site and online radio station that plays to my inner geek. You can find them here SI RADIO

With a cooler full of beer, soda and a huge lunch put together by my wife Amy, it really was a great day! Thanks for helping me BBQ in a torrential downpour while I rolled dice for the day.(Long weekends are wicked!) 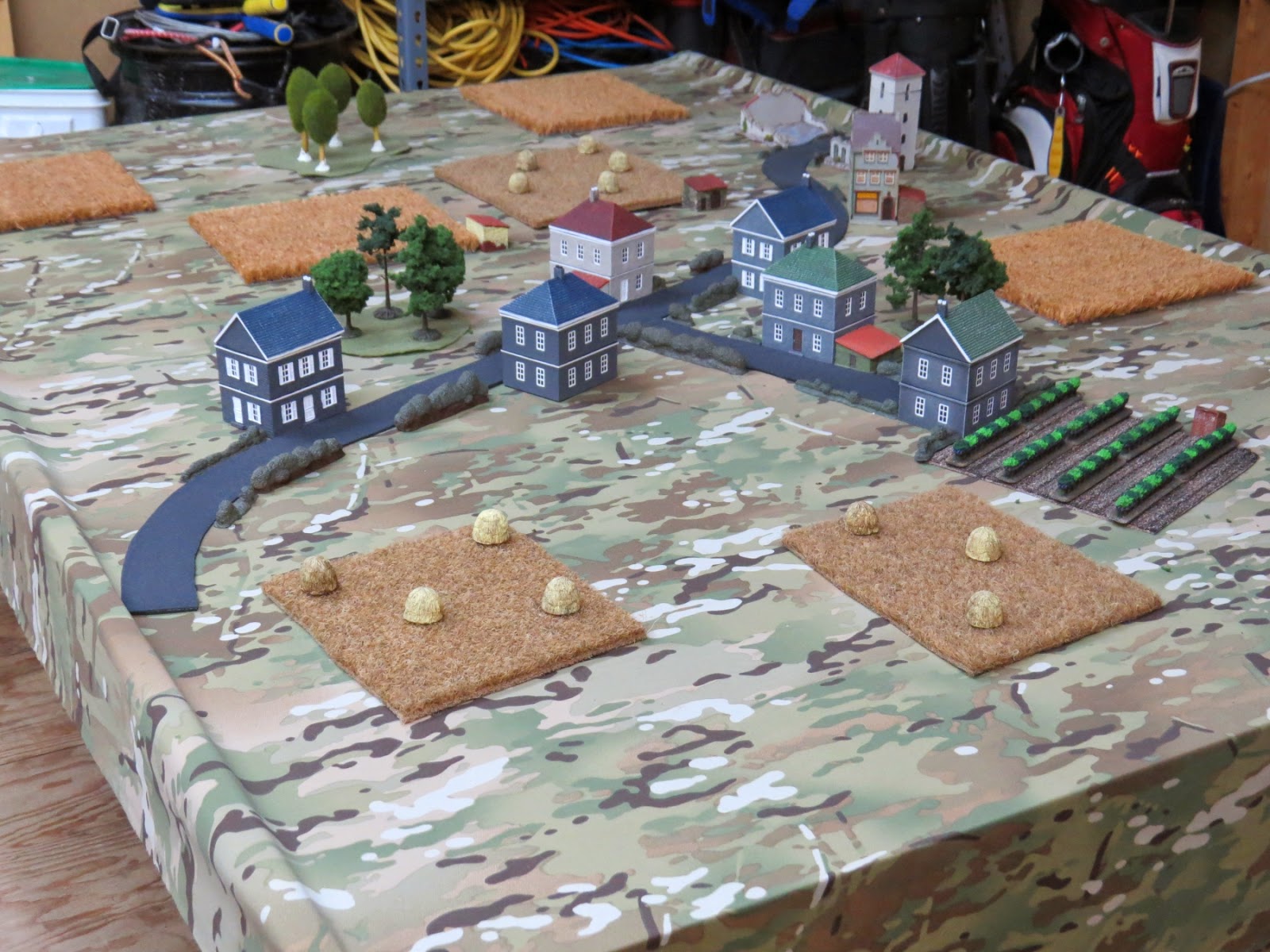 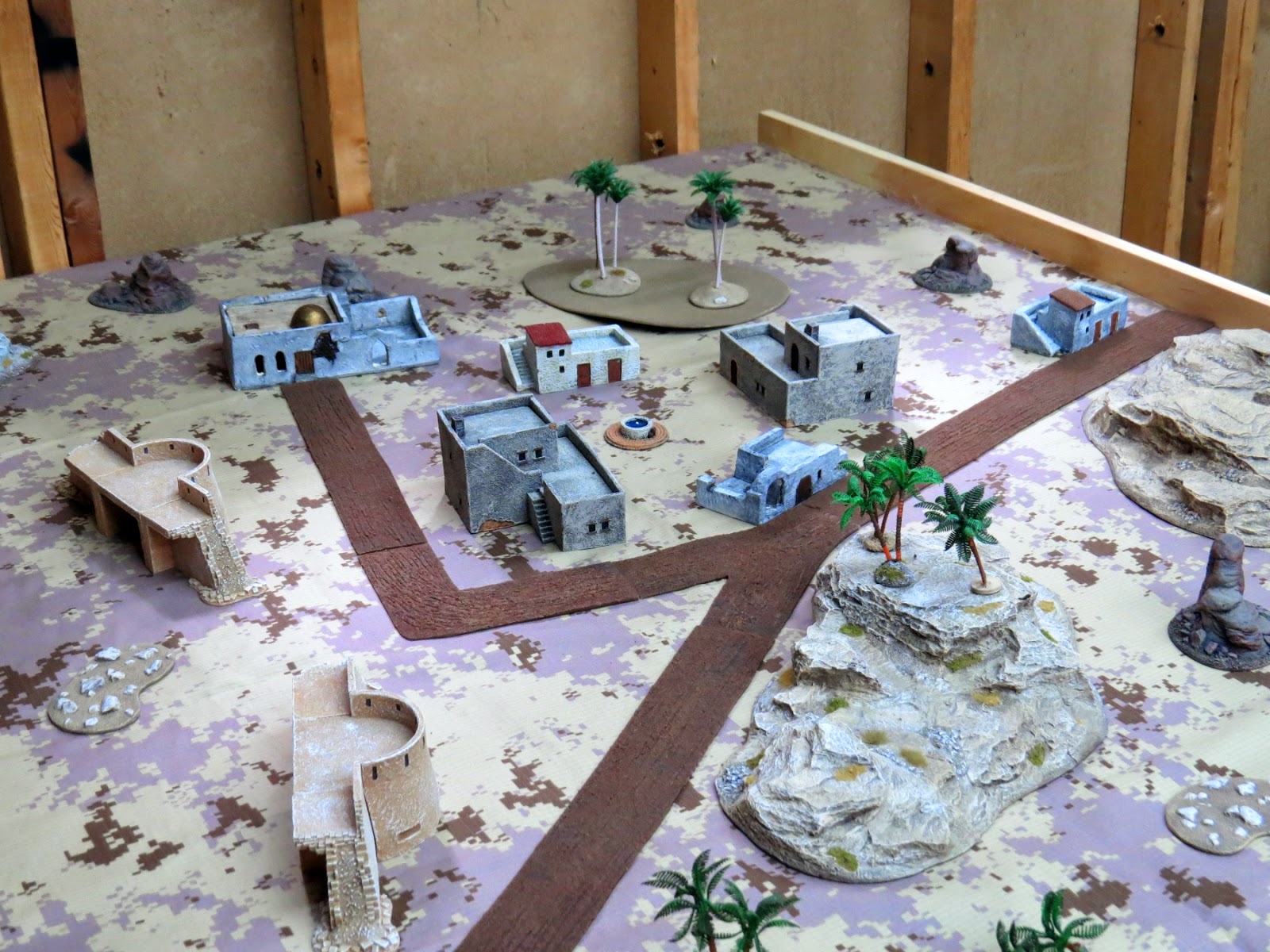 The Desert Fort Comes Out To Play

With two tables, everyone was able to keep rolling along and never had a chance to take a break except for lunch. Myself, Andrew and Dennis were all able to get two games in. While Brett and Rob could only stick around for one, I'm glad they were able to come out to the house and at least test potential lists for the end of the month. 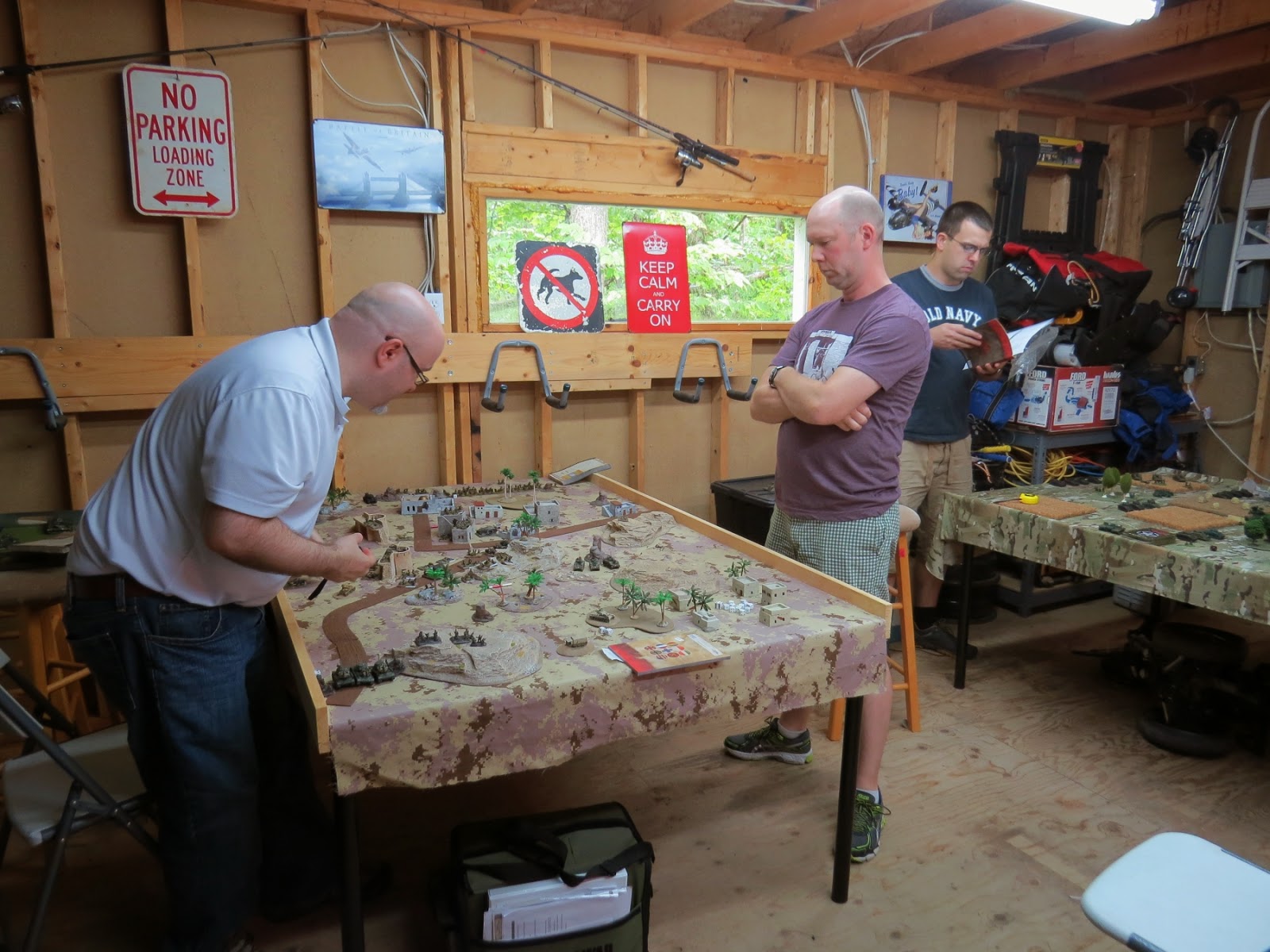 Dennis figures out his next move as Brett looks on.

We setup with a little less space, we wanted to kind of get used to moving around an awkward table to simulate tournament type conditions. On the clock for each game was also paramount and we had the extra room if someone wanted to paint while they were here for the day. 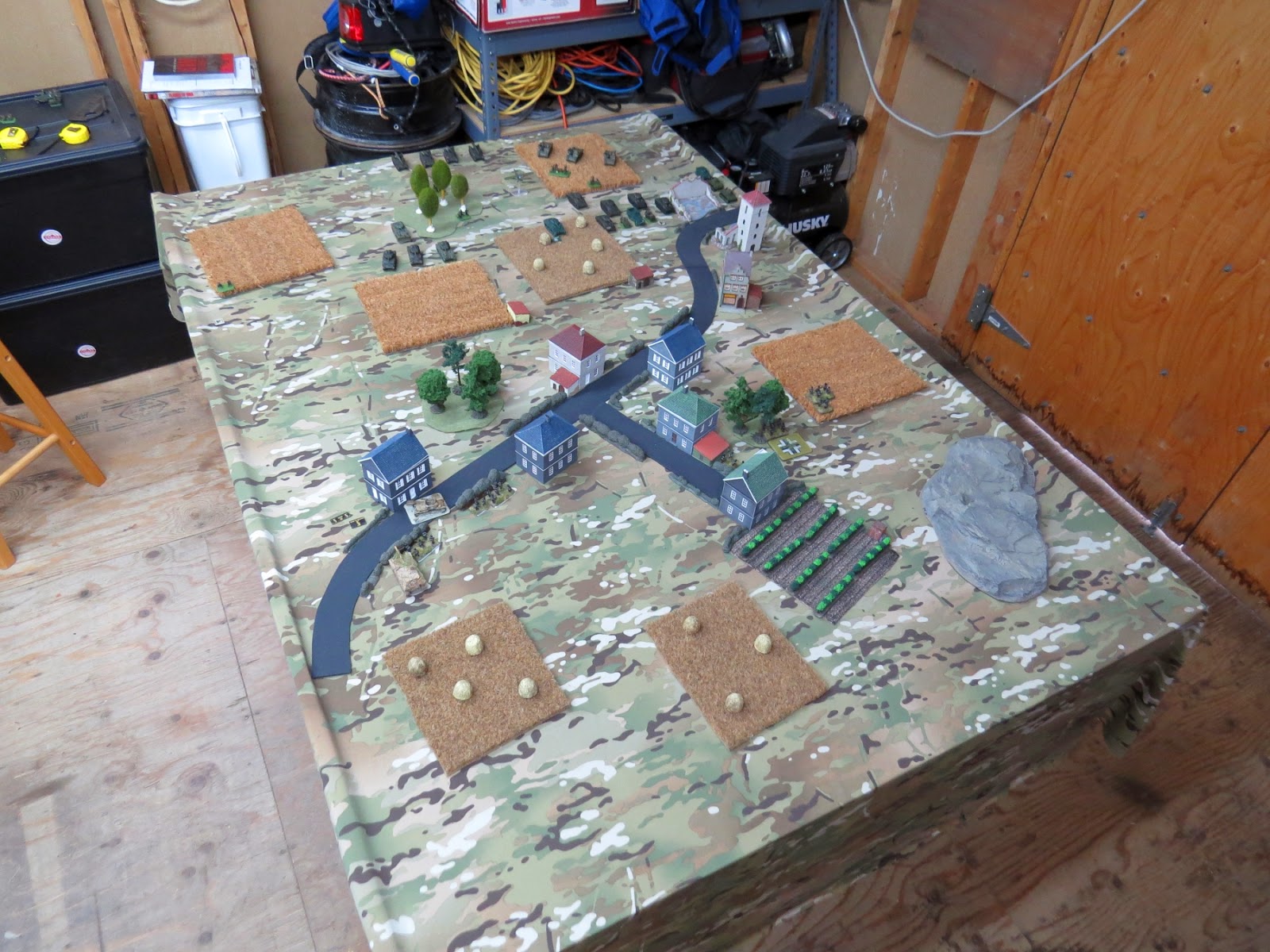 Winning one and losing one game was the way to go for me, here is what I am working on at the moment and may tweak it a bit. Running the 'Reserve' Panther platoon is beginning to be challenging in games with Delayed Reserves. Not being able to get them on the table out of eight platoons is tough, but it's like a three tank unit and one more for free! Can't argue with cheap Panthers, good armor, decent AT rating and they look cool.
362. Grenadierkompanie (Fortress Italy LW) 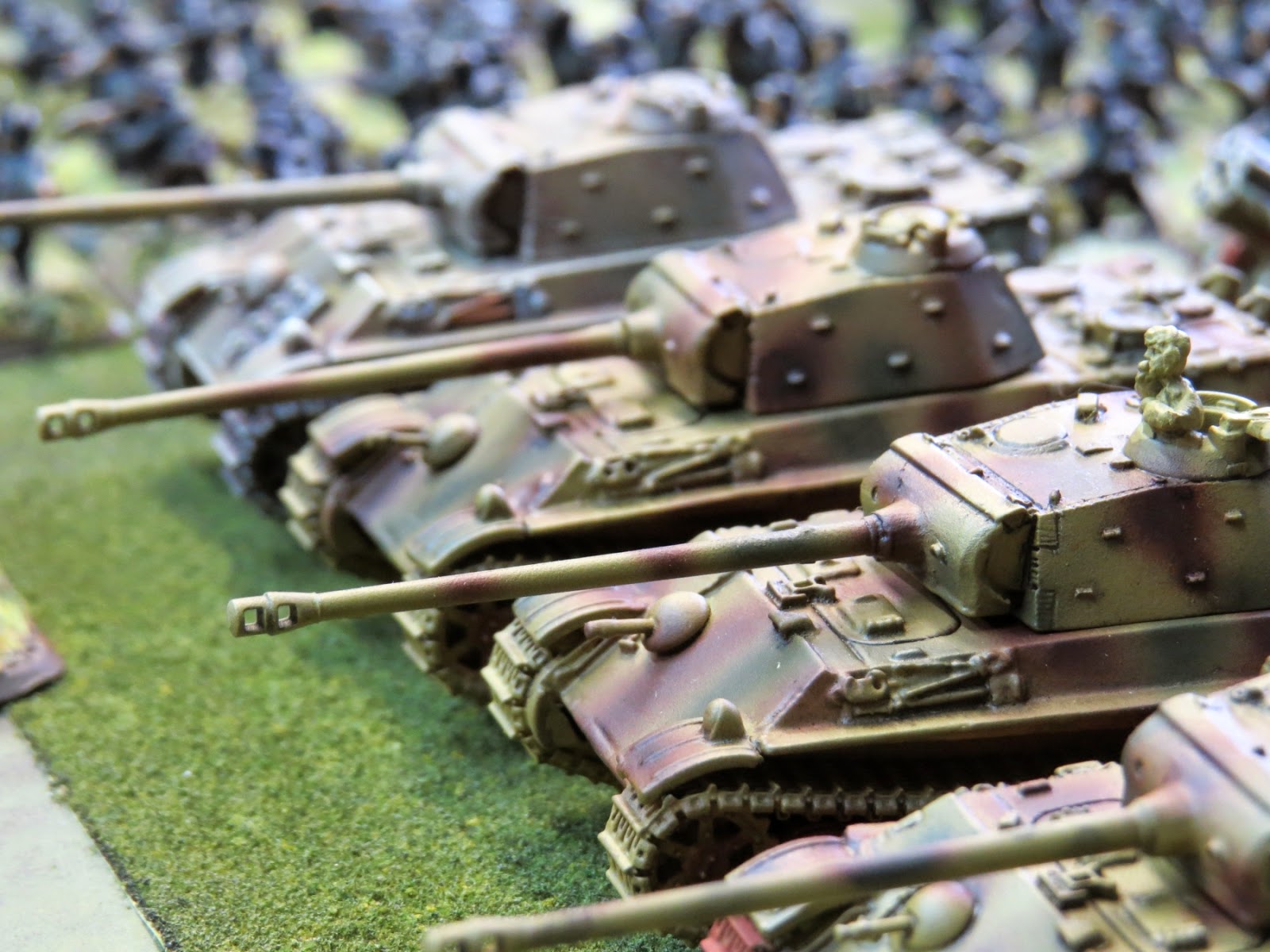 I find your lack of faith...disturbing.

As the day winds down and everyone packs up to leave, I quickly tidy up a bit myself. The one good thing about having your own 'space'. You get to simply shut off the lights, lock it up and put everything away tomorrow. I now turn my attention to some pretty good pictures of the day, and get to update the site!! The next few weeks will be a busy time for us. We are in the stages of recording our first podcast, prepping for nationals and working on new articles you don't want to miss! (Including a WWPD Exclusive by yours truly) I have also been busy cleaning up our blog list. If you have not posted in 3+ months, I have deleted the site off the list and have been adding 'fresh' sites that I think you'll enjoy. If you like our blog and can pass it on to other people to enjoy, feel free to do that! We'd love to add your site as well, drop us a line on our forum or simply email one of us. You can also find me on Twitter @jkMatty
By Matty at August 04, 2014