CA$H here,
So it was a blast gaming all day Sunday at the Splinters of Locara Tournament here in Ottawa. Check the tournament, campaign and pics here. This was run by our own “Sober Gamer” and was a stellar event to attend. Organized, great tables and even a lunch deal at a local deli really made for a wicked awesome day of 40k.
This is a long post, covering all my games. You can

I brought my freshly painted Space Wolves, which I painted in 1 week! Here are some pics: 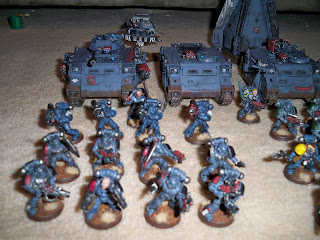 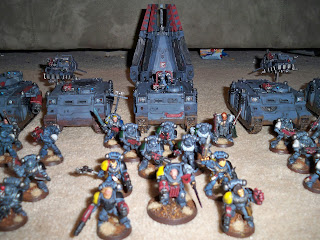 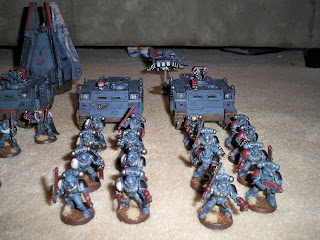 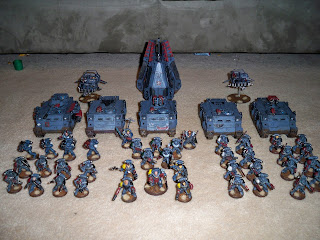 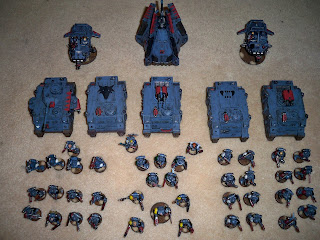 1500 points
I played a total for 4 games, finishing 2-1-1. My sole loss was to Matt Varnish and his Tyranids, and it was a very close game,  a chess match really. Took his whole army shooting, then assaulting my lone land speeder to break the tie to a win in his favor, and he finally pulled it off.  My 2 wins were my first and last games, Eldar and vanilla marines respectively.
Game 1: Chooka’s Eldar. The Eldar army had a huge unit of wraith guard supported with a farseer on jet bike and a wraith lord. He has a Fire Prism and two wave serpents, one with Dire avengers, the other with Fire Dragons. My  shooting was atrocious, and it didn’t look to good for me until turn 3, when I managed to get two Grey Hunter units into combat with the wraith guard. The mission was kills points, and it ended up 4-3 in my favor. So are one can imagine, not a lot of units were destroyed!
Game 2: Matt Varnish’s Tyranids. He had a solid list(as can been seen on the blog here) and I felt positive going into the game. Man did we slug it out! What a chess match. We had 5 objectives and Dawn of War deployment. Took his whole army shooting, then assaulting my lone land speeder to break the tie to a win in his favor, and he finally pulled it off. We really didn’t inflict large casualties on each other, both more focused on keeping the objectives clear of models until turn 5.
Game 3: “TROE” and his Imperial Guard. Awesome list, with a great paint job – and NO VALKARIES! We played capture and control, with Spearhead deployment. Turn one we both made mad dashes with our transports towards the enemy lines, only to be stopped dead by shooting. By the bottom of turn 2, we both had ALL our transport either destroyed or immobilized. With no hope of reaching each other’s objectives, the game turned into just a shits and giggles shooting match, which I was ill prepared to win. It was still a humorous game, with some lucky shots on both sides, and a general jovial feel as we were both out of contention. I always go to play for pure fun first, win second and every game so far had been just that!
Game 4: “The Lurker Below” and his Imperial Fists (vanilla marines). His star unit was a nasty looking land raider, carrying 5 terminators (3 lightning claw, 2 Thunder hammer / Storm shield) led by a Chaplain AND Librarian. He deployed in a refused flank, with  the land raider closest, ready to head into my lines, and was set to go first. However………………………..I stole initiative! This allowed me to take a chance and land my Drop Pod right in front of his land raider, and pray my sole melta gun and combi-melta on the Wolf Guard in the unit could pull off a miracle. The pod landed true, and I popped the raider with the melta – I knew my unit was now toast. The game was pure victory points, so I figured 175pt Grey hunter unit in exchange for even a land raider was a fair deal. Here is where the game was really decided though. After bailing out, the termies assault me on their turn. I passed my counter assault roll, and in the ensuing melee (initiative being the same across the board) I focused on and killed the Chaplain, and wounded the Librarian! This changed the exchange of points from 175 for 250 to 175 for 400+. He was a great sport about the crazy luck I displayed on the last game of the day, and it made for some great story telling around the room that evening.
Overall I had a great time, and really enjoyed all my games. It reinforced why I attend these types of events, and was really refreshing to see well painted and well played armies on almost every single table. To finish my Space Wolves up to 2000points, I plan to add a unit of Sky Claws, a Land Raider, and Wolf Priest. But with Game Summit 2011 coming in February, I think a  larger challenge is in order. I just assembled 30 ork boyz last night, and built this rokkit buggy out of a Deff copter:
More updates on both armies to follow!
CA$H out.
By CA$H at October 27, 2010