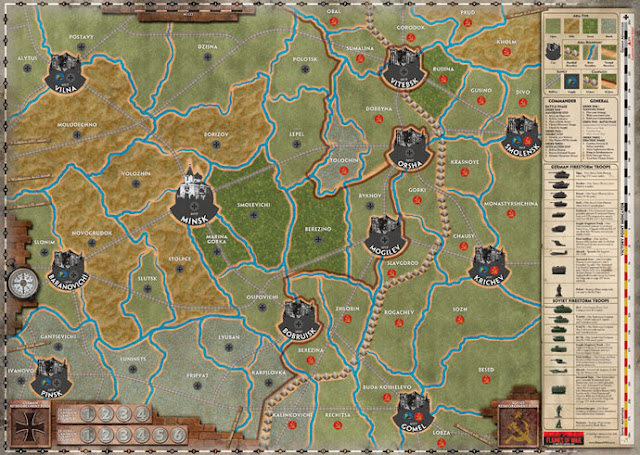 Over the weekend, I was able to participate in a local club event, the Carleton U Firestorm Bagration event.   As I have no Russians, I would represent the Germans with my Grenadiers backed up by Marders and King Tigers.     I thought I would face lots of heavy Red armour, so wanted the capacity to punch through it.    Here are some of the tables, before the games got underway: 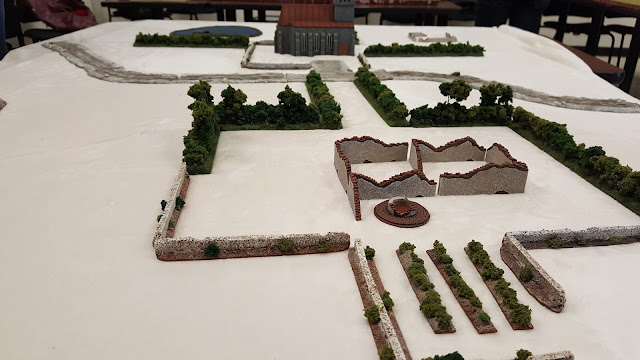 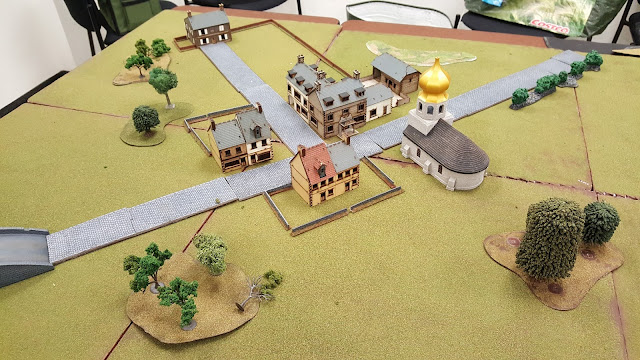 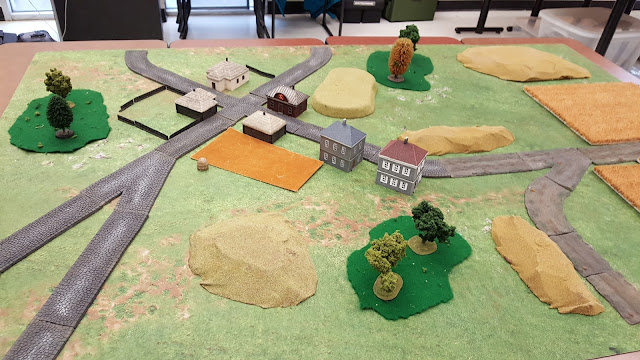 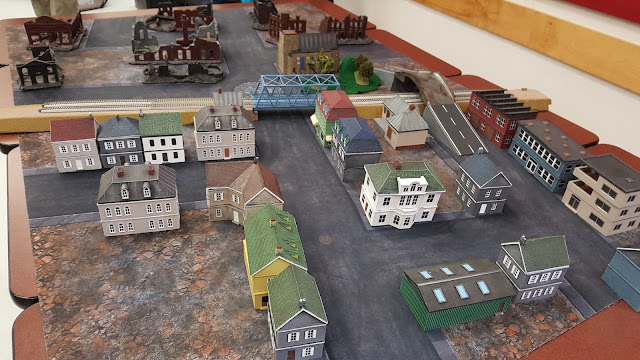 Vitebsk.  This table was brought in by Marc and Gabe from the Laval club in Montreal 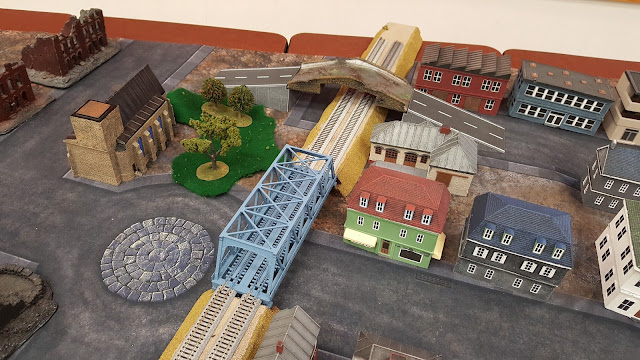 Cool urban battlemat, I did not catch the manufacturer 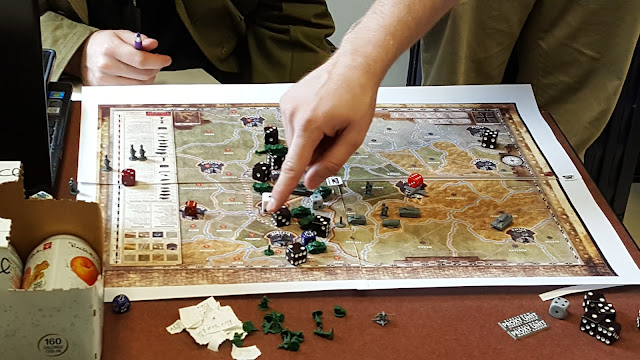 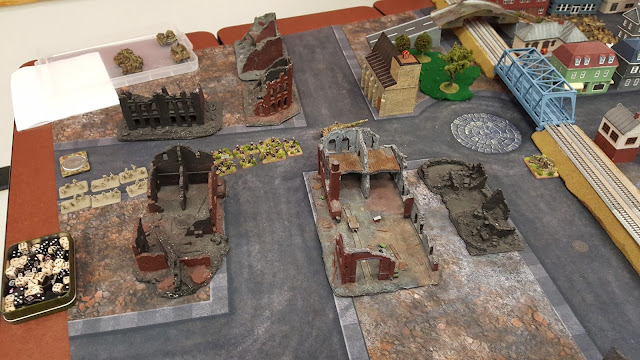 Breakthrough, with me defending with extra campaign Pioneers (unpainted) against Jordan V's Strelk with extra tanks and IL-2 from the Firestorm campaign.    My plan is to hunker down in the buildings and await his flanking force and funnel his units through the town square. 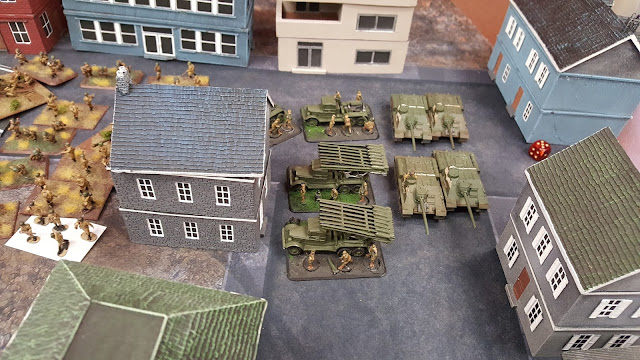 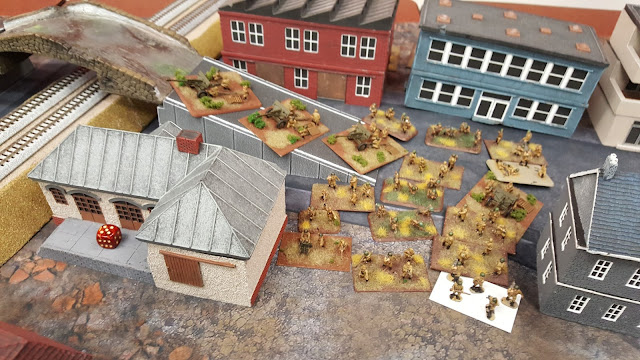 Jordan's ZIS-3s are being used as Arty since they can;t touch my King Tigers 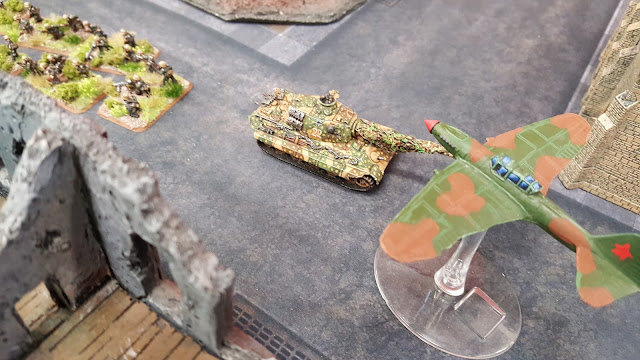 Right off the bat, the IL-2 was on my tanks, but could not range in.  Must be all the dots! 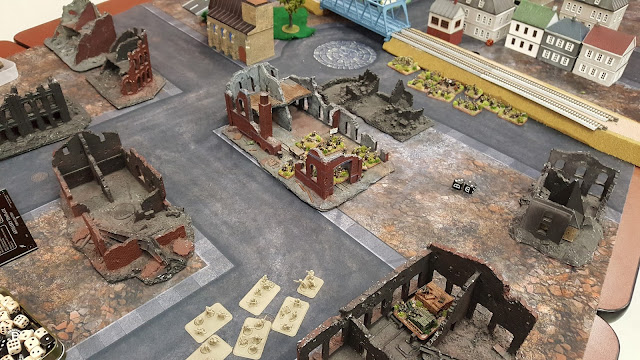 On my turn, I dash/follow-me my infantry up.   Jordan now has observers in upper floors to rain down some Arty though... 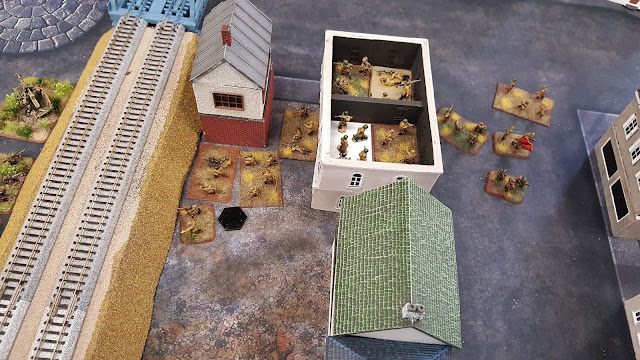 .. while only the railroad berm separates my small platoon vs this huge mass of Russians! 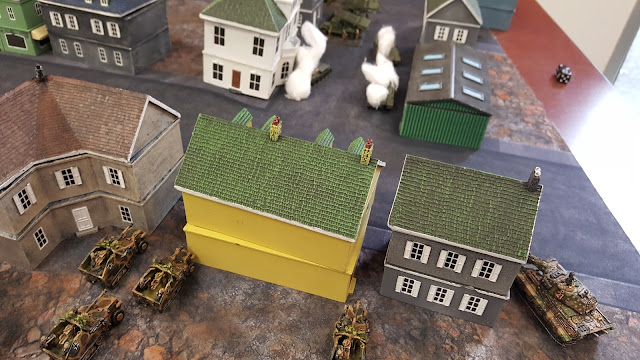 Turn 2 I pop my ambush with my Marders as my Reserve KT shows up.  Yes the gap between Green and Yellow buildings was JUST wider than a tape measure!  I would kill 3 of 4 Assault guns. 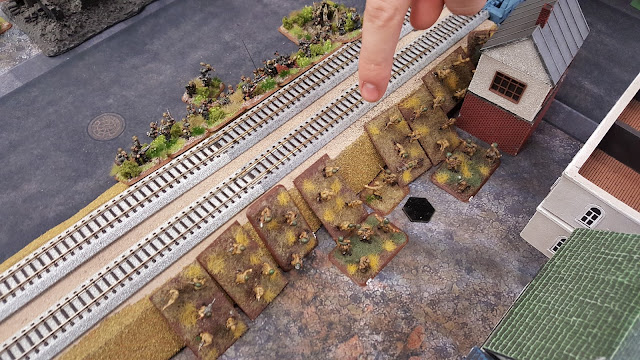 I moved up to the rim of the berm (hilltops count as bulletproof cover) and killed a few stands, but not enough to pin.    He would do the same thing and once he pins me, goes in for the assault! 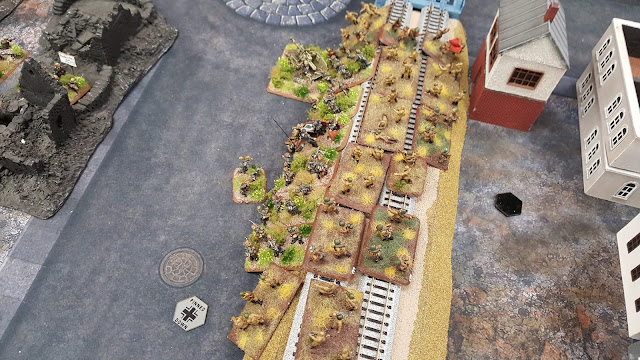 and would push me back, leaving me with just the HQ and platoon leader left! 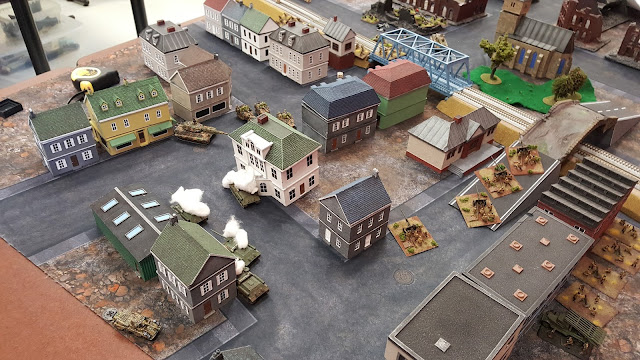 I try and mop up platoons with my Puma's at lower left of picture.. 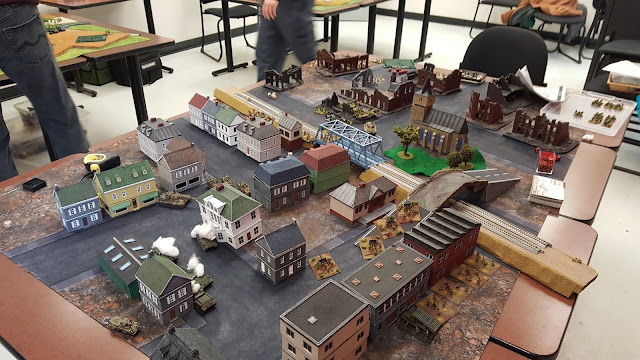 however, his flamethrower infantry pins my Pioneers, assaults them, pushes them back and NO ONE on my side unpins to be able to contest for his next turn!!!!!!  The Fatherland is shamed!  Good Game by Jordan V.   I was next tasked with an 'important defence' near Minsk, against Marc Viau 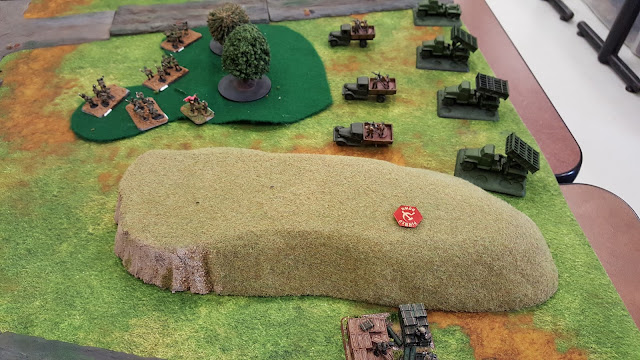 The Firestorm campaign gave me a regular Stuka (2 planes) and 2 Panthers.   Which is good, because in Encounter, otherwise, I would have had only 2 platoons on the board to start! 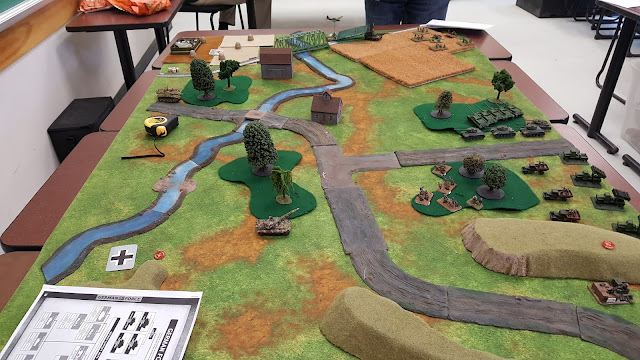 I use my Pumas so that my Spearhead deployment on the far side has my King Tiger past the river.  My other King Tiger is in position to start hammering his tanks 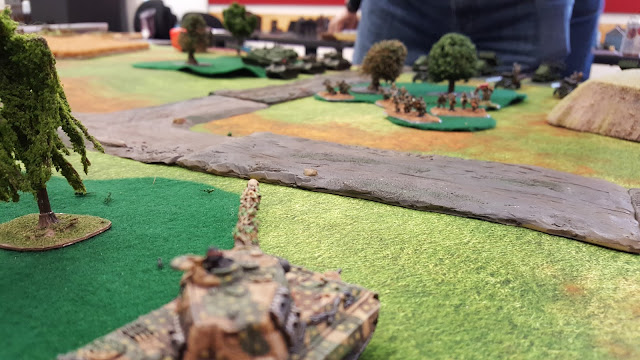 Good firing position, but he would move his T-34/85s out of there. 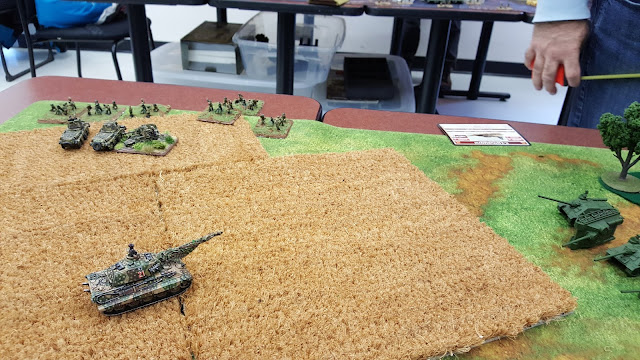 My Pumas assault the Mortars, and they get away.. I would then lose the Puma platoon to a bailout and then failed Last Stand. 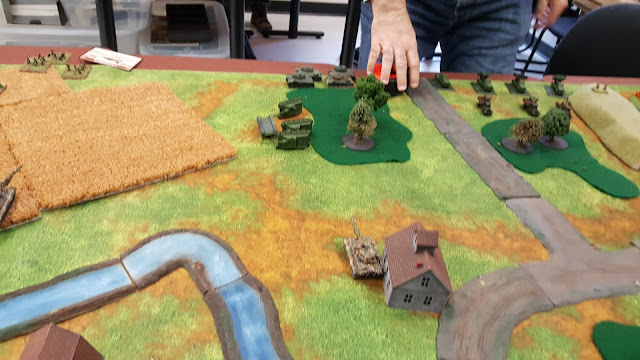 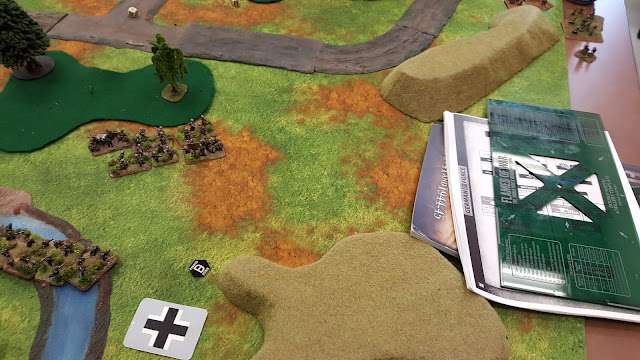 .. and my infantry move up and wipe out the Recce Soviets near my objective, though I am now under the Katyusha wide template 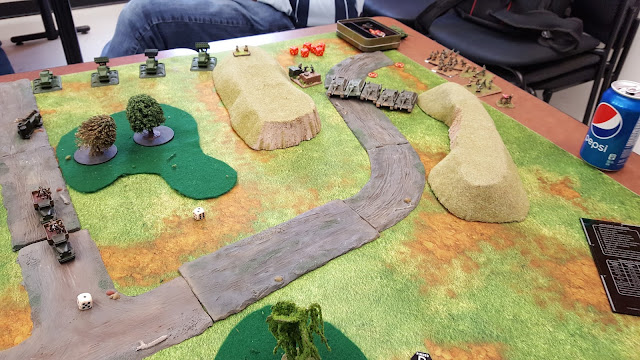 Marc REALLY needed this second unit of Cat-Killers to kill off a King Tiger with a flank shot, but alas, Scattered Reserves put them way over here, out of position. 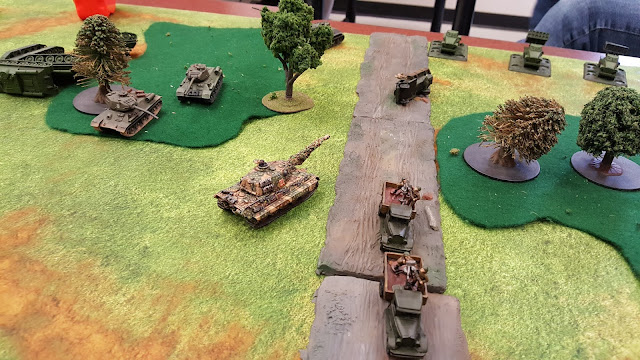 Realizing all he had to do was kill off a few of my core infantry stands (since 75% of my army is Support) he sneaks the AA MG trucks past, and uses Volley fire on my infantry.   This one T34/85 would make his Cross checks for the flank shot, but I made my saves.  My Marders would take the field objective for the 7-2 win, all because Marc's assault guns came in on the wrong flank to contest!

It was a good time, and big thanks to Jordan V, Grant, James, Marc, Gabe, Stuart, Phil, Darko and Ben for a great day of gaming.   As usual, Video is below: