As the defender of Rearguard, I would have to manage my losses with Strategic Withdrawal, but did get 3 Minefields.  I put 2 past the church, and one on the road, to prevent a 40-inch road dash from his 8-rads.

From the get-go, Matt was aggressive on my left flank, Blitzing up his Pzr IVs around the church to snipe my Pzr IVs in cover, and even the shots that hit, AT7 vs FA 5, they all bounced.   He even road-dashed the 8-Rads down the road, going so fast the mine fuses did not trigger in time (he rolled a 6 for his top armour save!)   His Marders blitzed into the field to take shots, but being concealed and GtG saved me from his initial volley.. 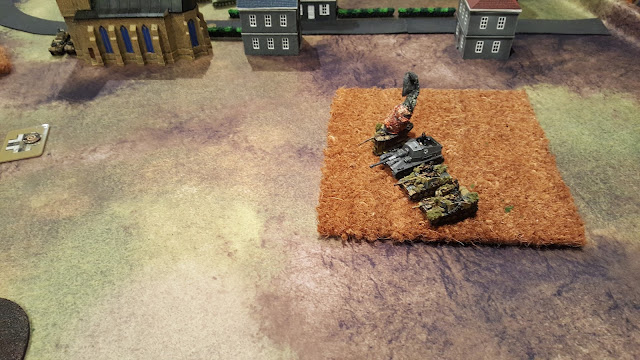 My return fire from the Marder firefight results in one of his burning.   His unit leader marder is a Dicker Max !!! 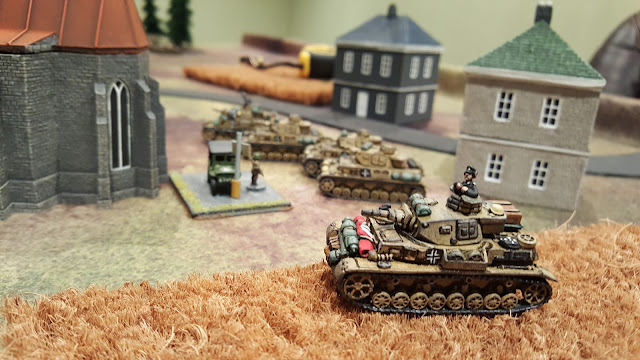 My Pzr IVs, splitting fire vs his Pzr IVs and some against his Pzr II rush up the middle 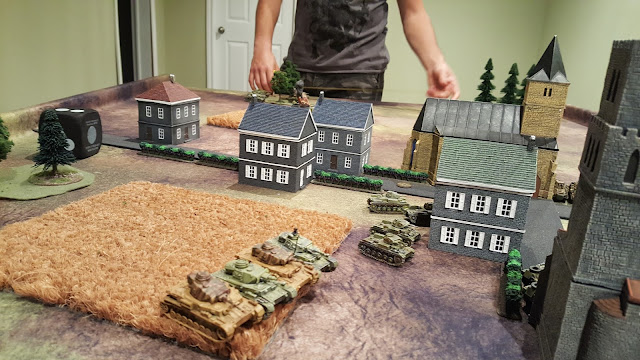 All his Pzr IVs would save vs my AT7 shots.., his Pzr IIs can be seen using that house to limit return fire while he snipes my 8-rads 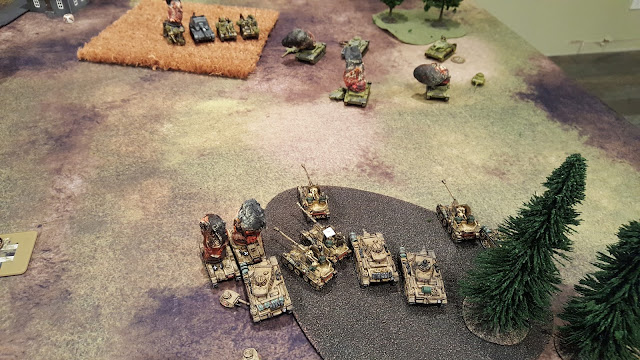 Meanwhile, I had to reveal my ambush in the trees in order to save my Marders and the right flank.. while I could make my Fritz-Moves (Blitz-shoot-Shoot'n'Scoot) the failed cross checks meant tanks remained visible for return fire.  In MW, Marder's only cross on a 4+!   As you can see, it was a vicious firefight on the right flank.

While the tank battle on my right flank was going my way, Matt was putting on the pressure with his 8-Rad on the open objective, and his Panzer IVs on the Church objective.   I pulled a gamble here and there (best seen in the video to be honest) but was running out of active platoons.   At the end of the day, while I was one tank kill away from putting him into Formation Bad Spirits, he was able to remount a Pzr II on the open objective and take the win.

So it was a fantastic game, with a tonne of manoeuvre on one side, and a blistering firefight on the other.   I felt my ambush was at the right spot at the right time (after he moved his Pzr IIIs into the open for close-range shots on my Marders) but I think the choice of Pzr IV shorts was not a good one. AT7 FP3 is fine against anything that isn't a tank, but we were bouncing shots all night.   As much as it pains me to, I think I will remove the stubby 7.5cm guns and see if I have any replacement barrels.   The 7.5 longs are a huge expense though, so we shall see.  Maybe go 2 and 2, and play them like a Firefly platoon?   Or ditch the Pzr IVs altogether and sub in 10 Italian M14/41s from that new Wildcard Formation?

Anyways, I of course did not take as many pics as I would like but the below video is pretty thorough, hope you enjoy it.