A quick Late War match, 1050pt game, a tune-up for Canadian Nationals.   I used a K.G Peiper list (fearless trained stuff) vs  Rob's Canadian Mech Infantry out of Market Garden.  I think Rob was out of his element, as he had no artillery of any kind, which for him is unheard of!    The hecklers playing 40k on the next table over decreed we should play Bridgehead.  (bonus 40k pics at the end of the post, and as ever, a video as well) 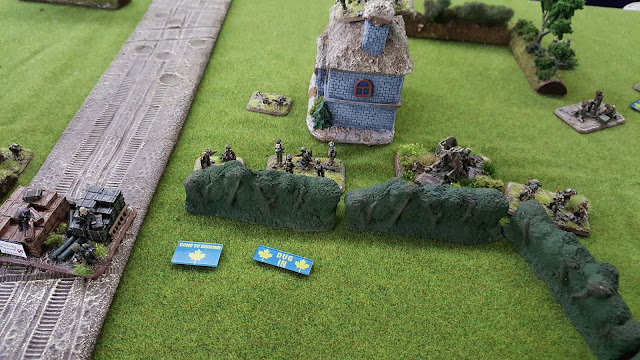 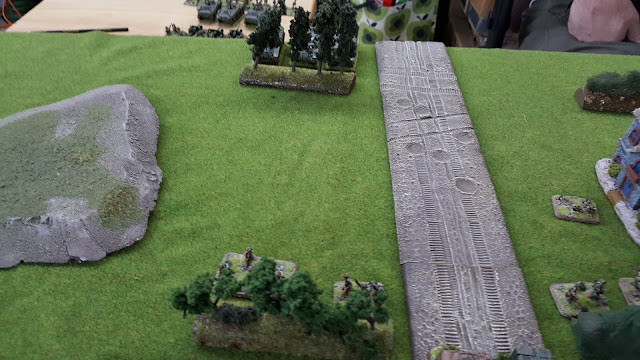 Hard to see behind the tall trees in the back, but the transport section of Kangaroos are there. 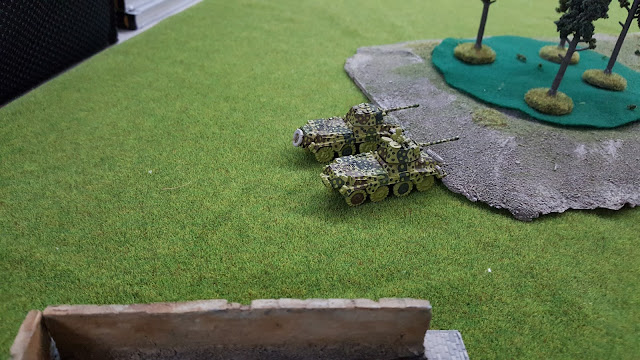 My half-finished Puma's Spearhead to this area of trees, with plans of Fritz-Moving up, shooting at the Kangaroos, then moving back to cover if they pass the Movement Orders. 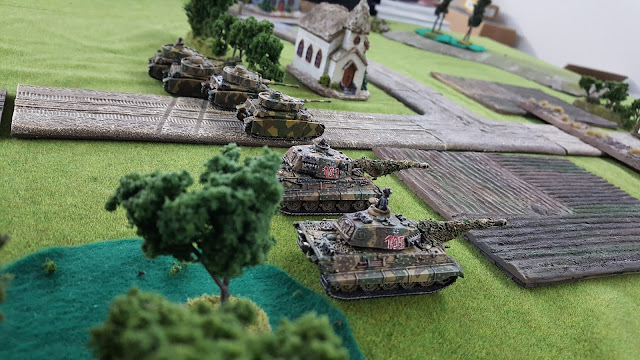 KG Peiper, when attacking, the Pzr IV platoons can Spearhead, and the King Tiger HQ and KT platoon take advantage of the expanded deployment zone. 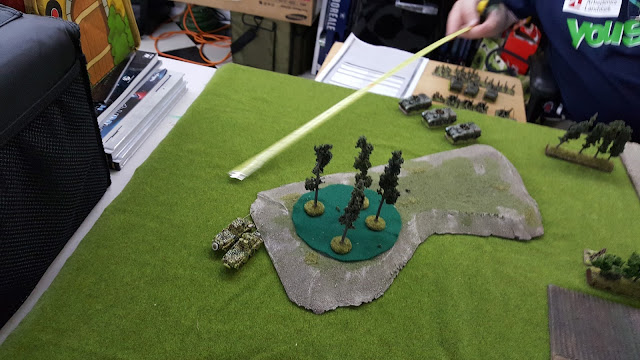 I had successfully Blitzed, shot at the Kangaroos, then Shoot N Scoot back, but AT9 vs FA 5 plus range meant I didnt get any shots to count.   Rob now rushes his Kangaroos forward, with designs to .50 cal. my Puma's.    My armour saves were made however. 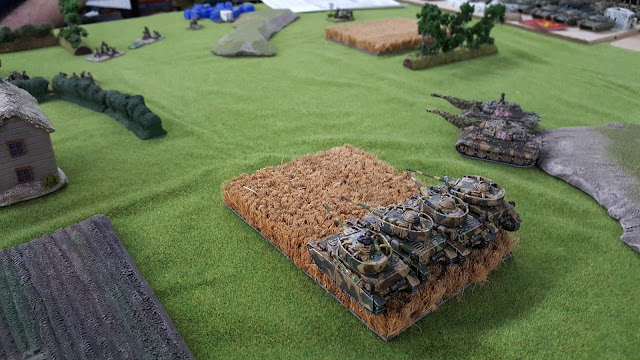 The game devolved into a waiting game.  I couldn't commit anything until his 4 x Achilles with AT15 came in, but they were in Scattered Reserve.  You can see in the background I had Skorzeny jeep trying to block that back quarter from being a viable deployment for his Achilles.  Meanwhile, my Pzr IVs had to hide in the crops, as his ambushing 6lbrs had to yet to be sprung. 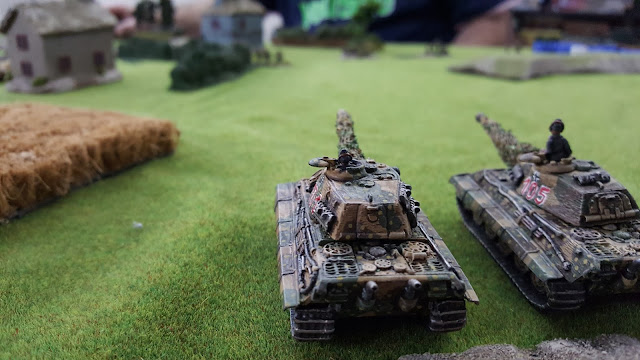 With no armour to shoot at, these are just very expensive AP3 platforms... which, when needing 6s to hit infantry, were useless apart from I think one kill all game vs his Infantry 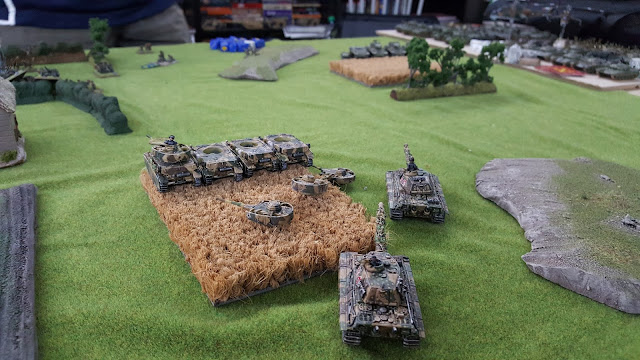 Turning point of the game:  I had elected to use Skorzeny to block once again the quarter deployment option for the Achilles' reserves, and failed.   Since I can not move when Disrupting the enemy, I was challenged by the HMG unit leader, and FAILED the challenge: "Who won the 1941 Stanley Cup?   Umm, the NY Mets???"  Firing Squad!    The Achilles come on and start workign their way up the side of the board, whilst the 6lbr AT11 x 18 shots made short work of my concealed Pzr Platoon. 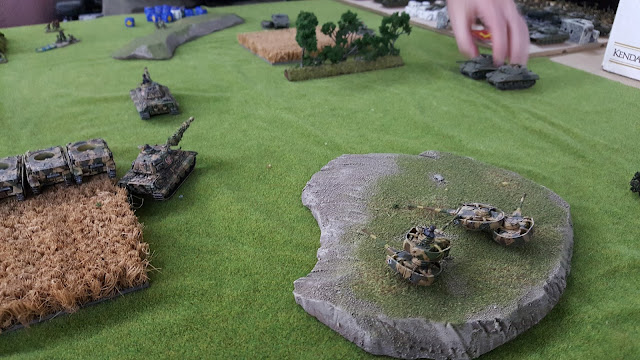 Rob passes his Blitz move order to see the side armour of my HQ King Tiger.  I had to move it up to be within 16 inches of an objective or lose the game.   2 shots, two hit, 2 bails!!!!  I rolled a 2 for my remount, and we thought that was it, and I was down to one platoon In Good Spirits and lost the game.   Turns out, one of the hits could have been put on the platoon KT, and that the HQ tank can reroll on himself.   But still, this is why we are playing test games before Cdn Nationals. 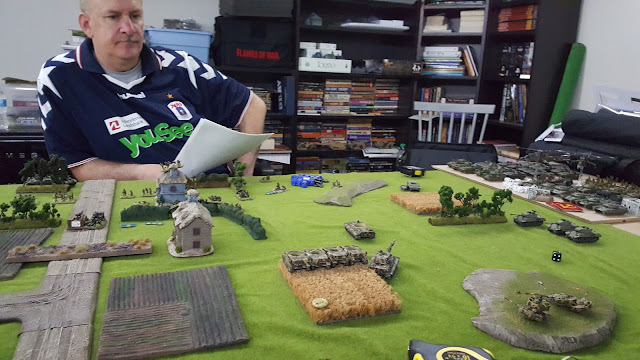 The excitement is palpable in Rob's face as he exults in his Achilles winning him the game :)  Great game, and now I know a bit more that I need to keep the thinly armoured Pzr IVs hidden, since being trained and only FA6 means almost everything in LW can hit them easily.   Video and bonus 40k footage below. 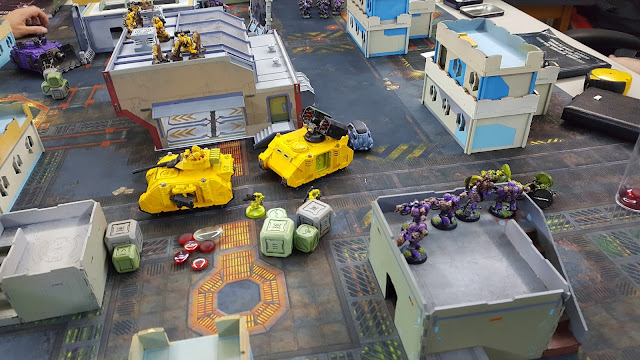 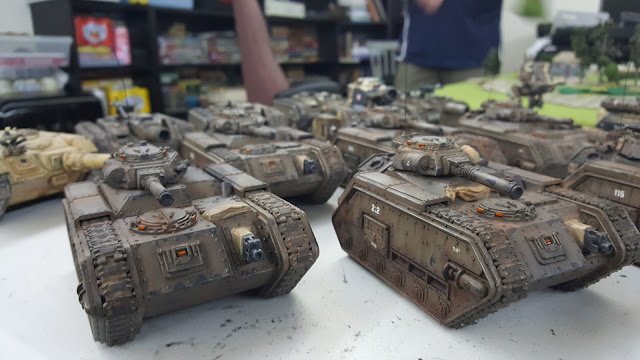 Brett started digging out his old Forgeworld army, the Death Korps of Krieg. 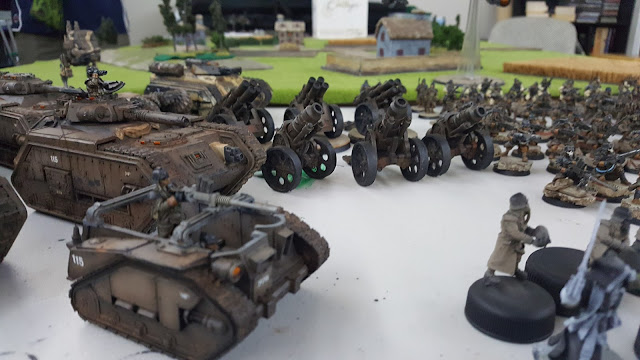 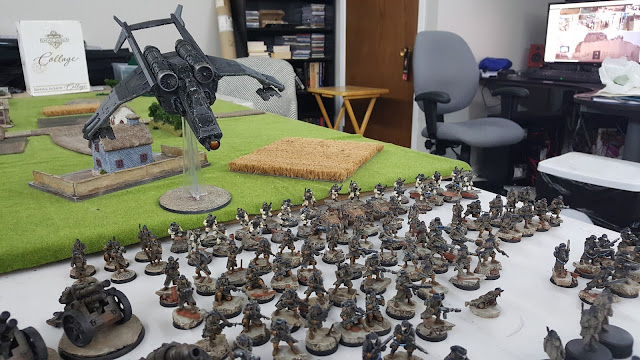