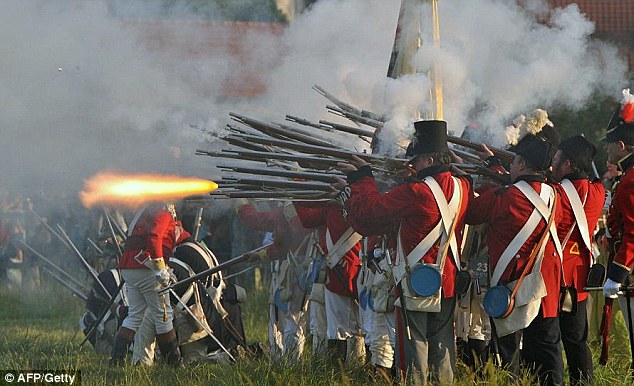 Over the weekend, we had ourselves a Napoleonics game featuring Chris Caron and I running the dastardly French (and one unit of Irish allies) vs Mark and Rob's assorted British / Allies including Kings German Legion, Badeners (posing as Portuguese) and some Black Brunswickers.  We kept things reasonable and had roughly 200pts per player, and thus 400pts per side.     Laid out 2 static objectives (Lion statue and french supply cart) in the middle and would score 1 VP for each enemy unit broken.    As ever, Video Battle Report is at the end.  Enjoy! 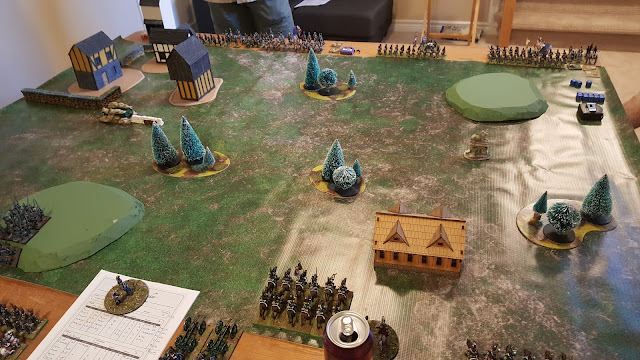 View from the French side, you can see supply cart left middle and lion statue mid right.
We decided to deploy onto the table using orders.   Hands up if you can guess whose entire Brigade failed its command rolls?   I took a cavalry Brigade with 3 units of Horse and 2 Horse guns, and thus was not able to take advantage of 'Attack Column' Command bonuses! 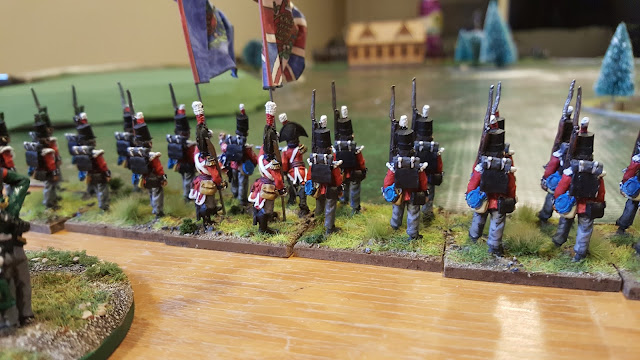 Rob's splendid King's German Legion preparing to deploy in Line Formation to sort out the frenchies. 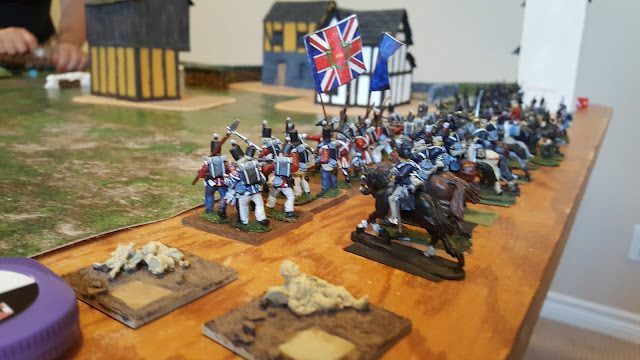 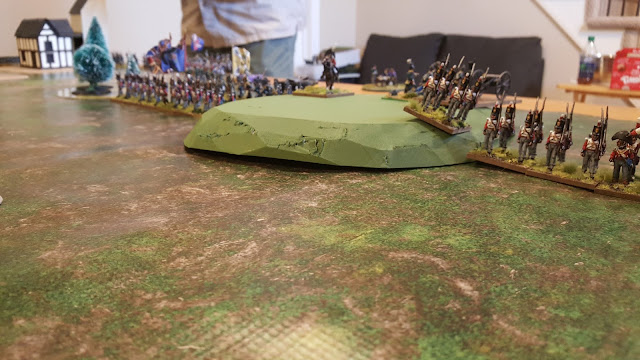 After my Brigade failed to get on the table, and Chris' 3 infantry and 2 light infantry (in attack columns) only moving one move, the Redcoats managed to get everyone in place, except the guns. Rob here has left room for the guns on the hill. 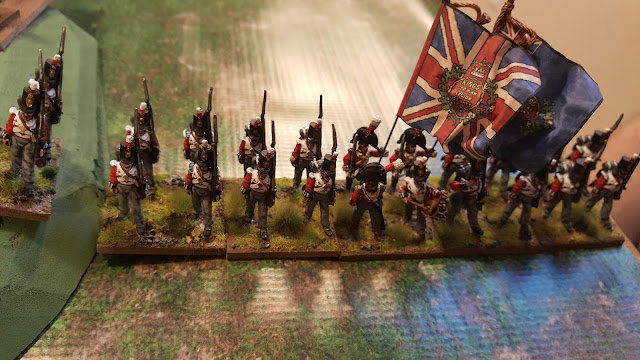 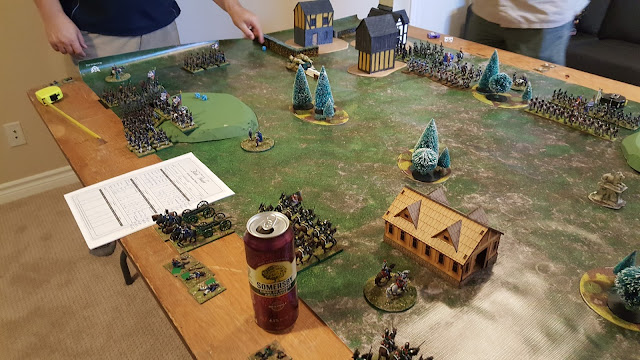 For the second straight turn, most of my army does not come on the board.  Only my 9eme Dragoons are on board near the house and obscured by my alcoholic beverage :) 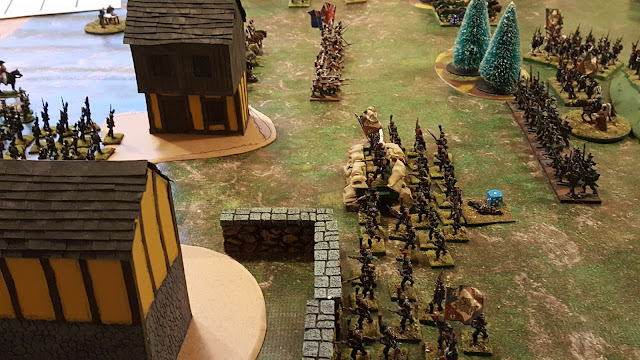 Meanwhile, Chris' 2 units of Lights move up to the Supply wagon and deploy into open order, with the Irish plugging the remaining gap to the trees.    Mark already has some British in the middle and a vicious close range firefight would ensue . 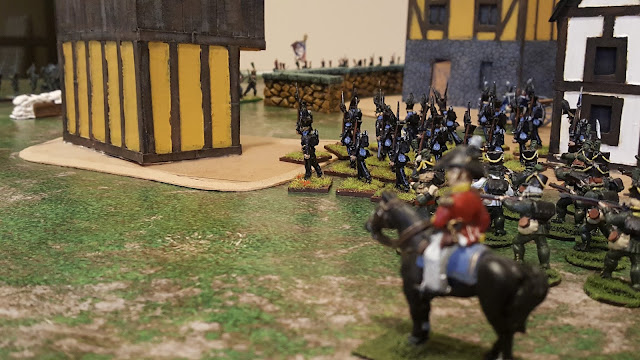 Mark's Brigadier fails to inspire the troops to get into the safety of the houses, even though they would be much safer from the musketry coming from the stone walls in the background there. 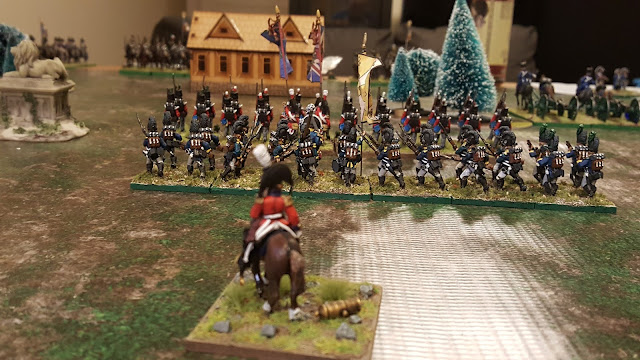 Meanwhile the German's under Rob's Brigadier await the tardy french horse to arrive!!!!!   Only my guns made it on (back right) and took pot shots at Rob's limbered guns on the hill 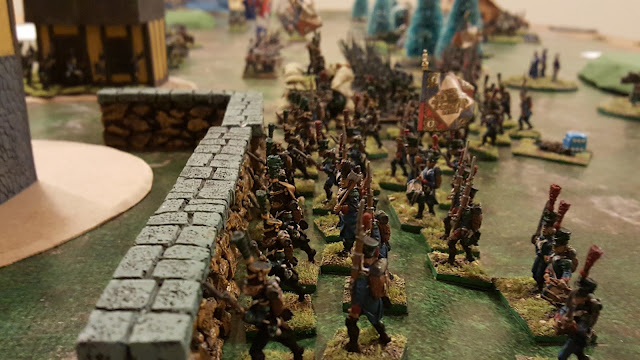 Holding the Supply Wagon and manning the defences, Chris' Brigade has no reason to move and focuses fire on the limbered  British gun in the town square, Disordering it repeatedly so it can never unlimber and fire cannister (see below) 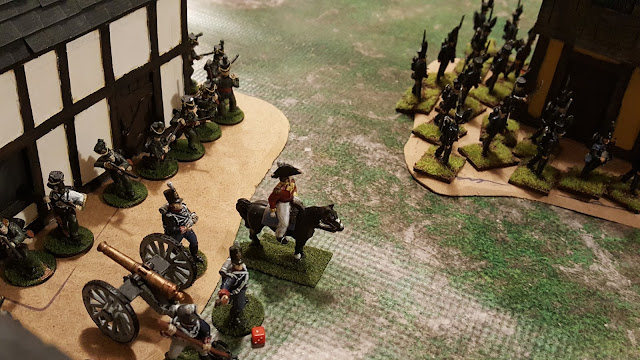 Mark's Brigadier would love to order the gun to fire, but its is permanently limbered with Disorders. It would eventually break off after failing a morale test. 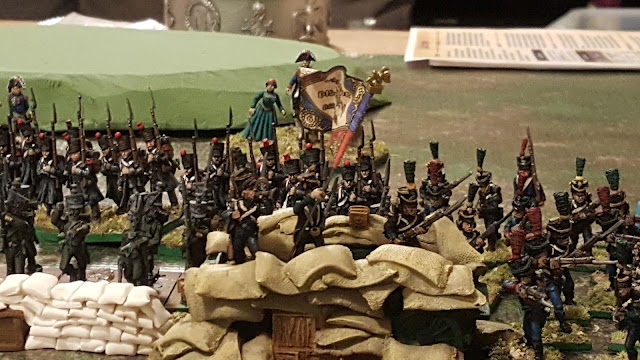 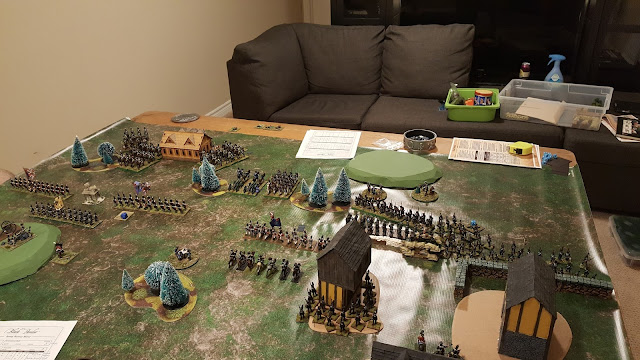 FINALLY my cavalry brigade comes on the board, but can only declare charges on the infantry and they form square.   My Horse Guns, despite being within Cannister range, only on the last turn do would they finally break Rob's KGL line infantry.    With Mark's Brigade below half strength from the town-side fire, the British -Germanic alliance would fall back and leave the field to the French.  To be fair, Chris' infantry did all the heavy lifting.   Still, great game, and it turns out we have enough models and terrain to play in Scott's absence.   Looking forward to our next game, perhaps some Colonials?