More ELITE: Dangerous... if you are a rock (mostly pics) 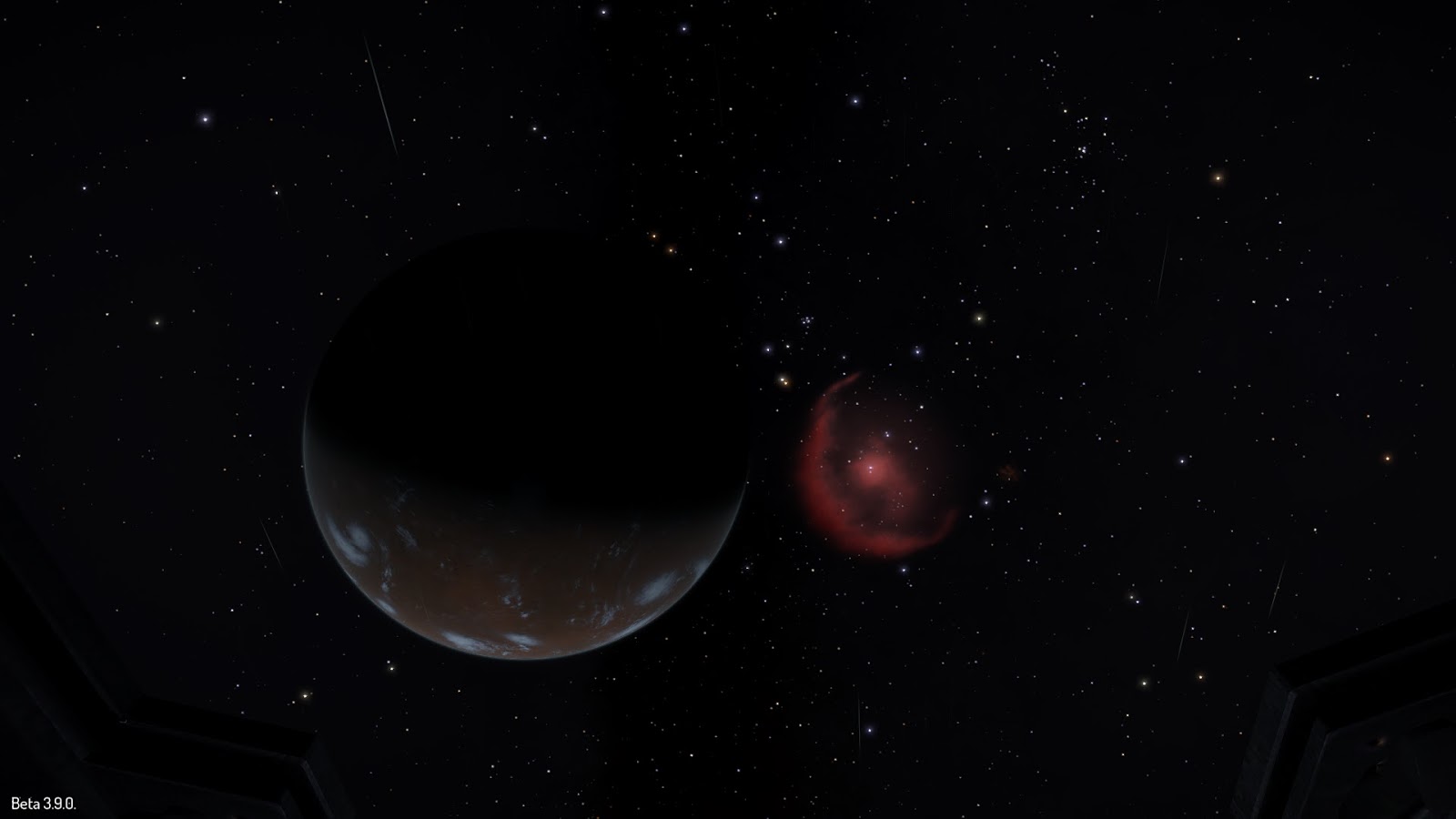 'In space, nobody can hear you mine!"

Well, since last time I posted about ELITE, the game went into the final beta stage, and now entered Gamma, which is supposed to be a pre-launch for backers.   I wanted to test out mining before 'the last character wipe' so if I muck it up, no one cares right?    In ELITE to mine, you need mining laser, refinery, and cargo space.   I sold everything, bought a 'Hauler' space cube van basically, and started looking for a refinery to install. 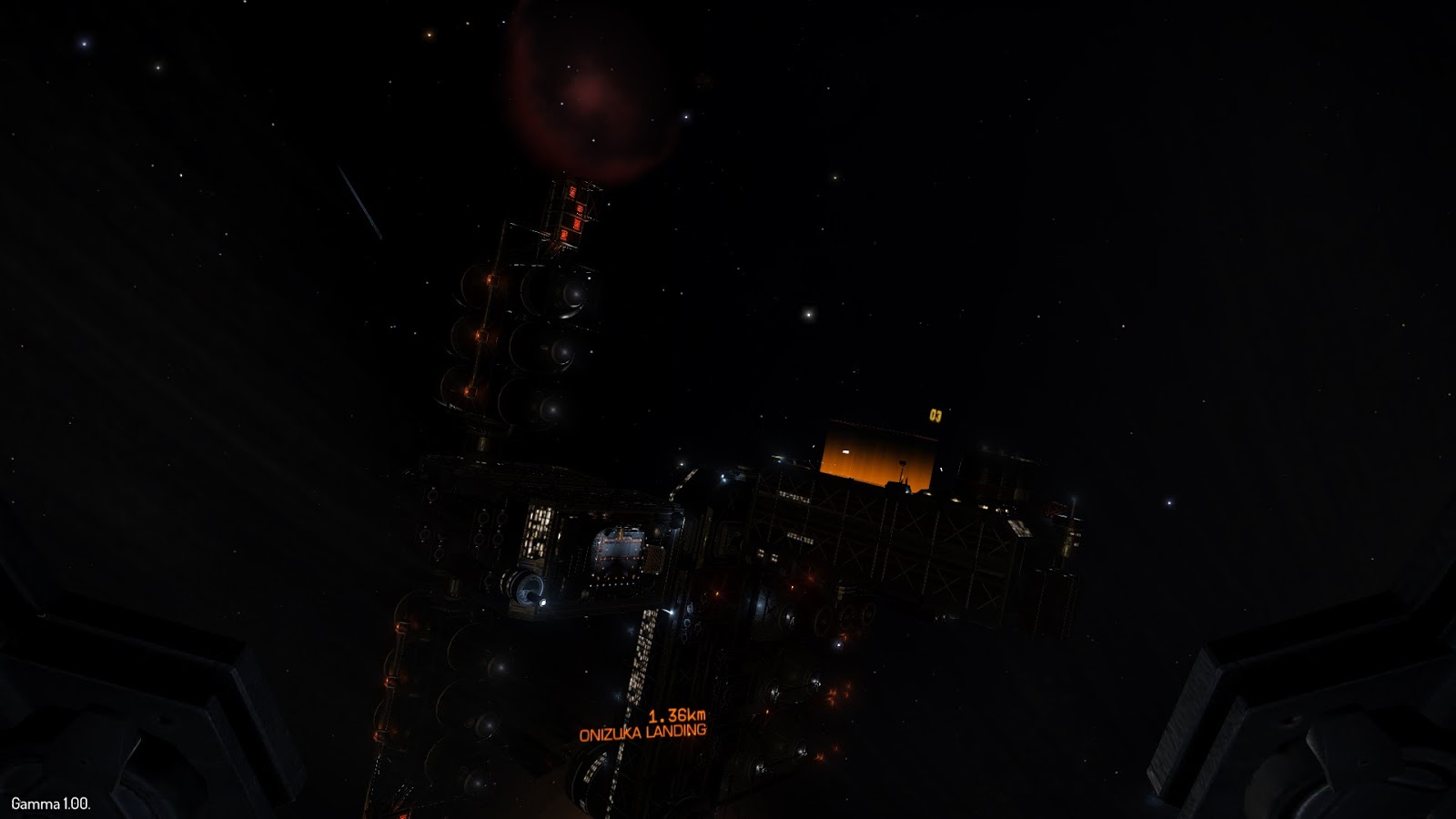 On approach to station that had my Refinery.  Pitch black.. luckily once you request docking, the orange glow is your pad.   Station named after one of the Challenger astronauts?.... 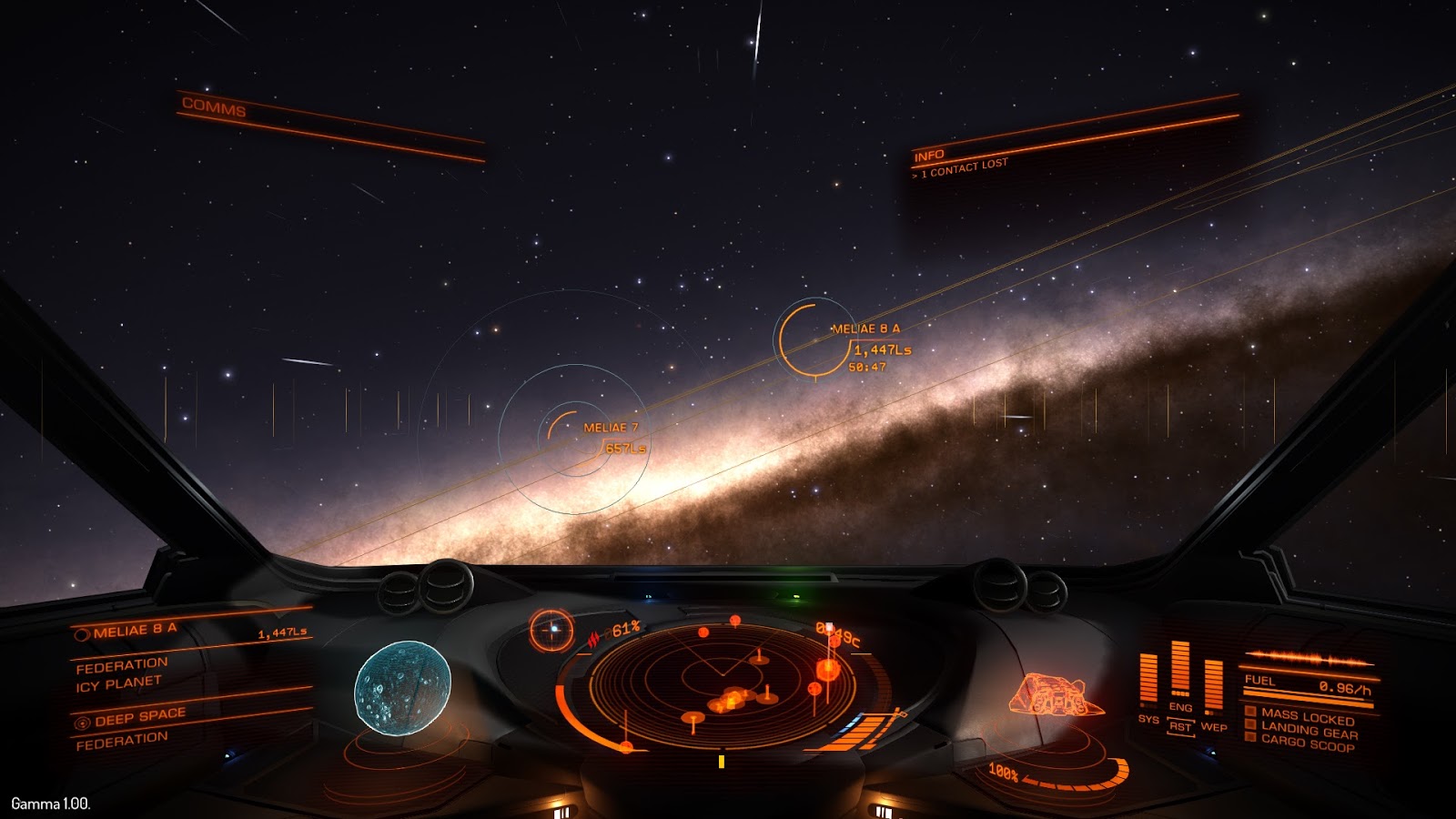 So the system map shows NO asteroids.. but info panel says Meliae 8 gas giant inner ring has minerals.   Off we go (target on the right)   BTW, in Gamma, already someone has taken the 1400 jumps to get to the center of the galaxy.. so inside the orange milky cloud here!!! 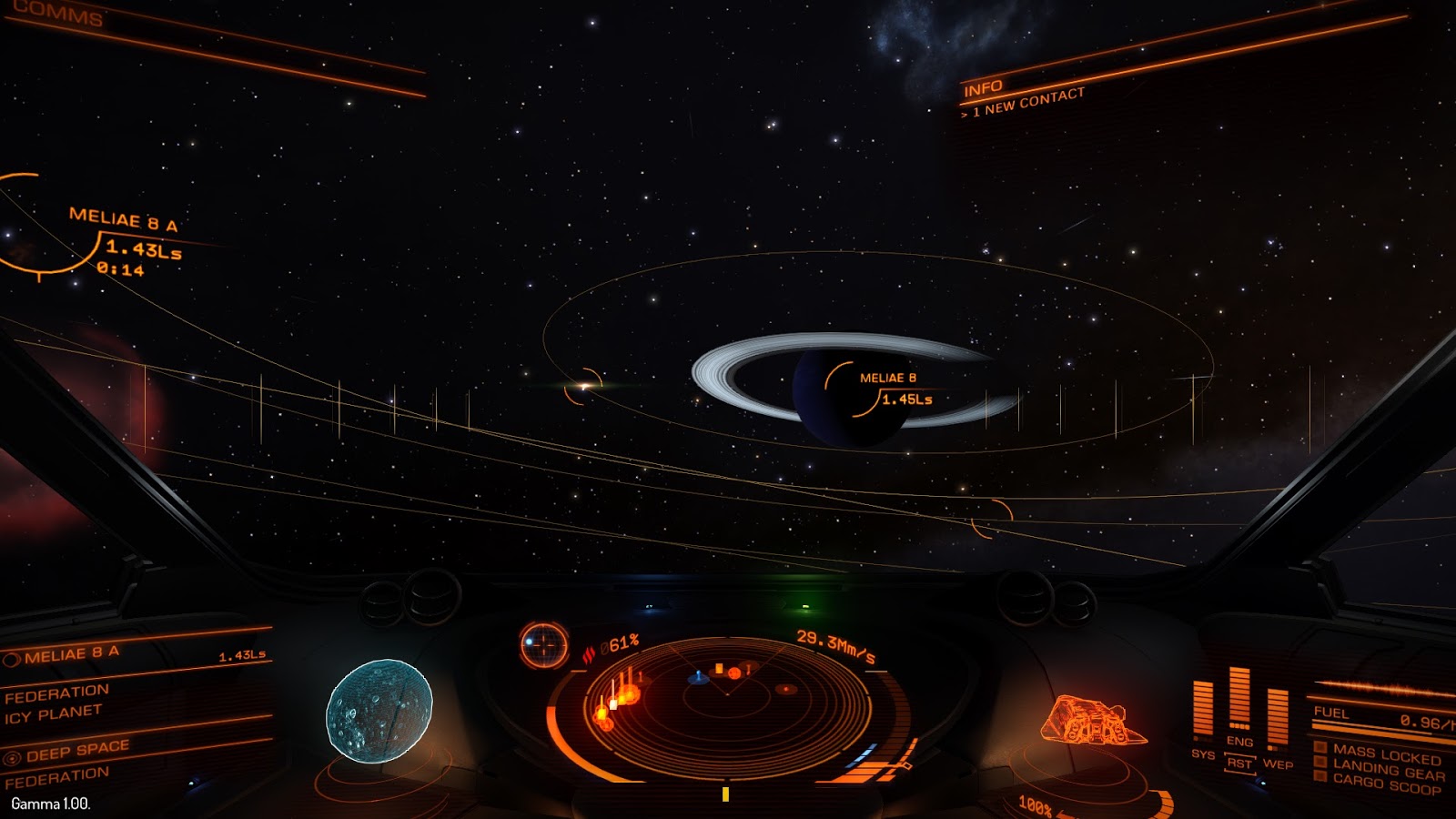 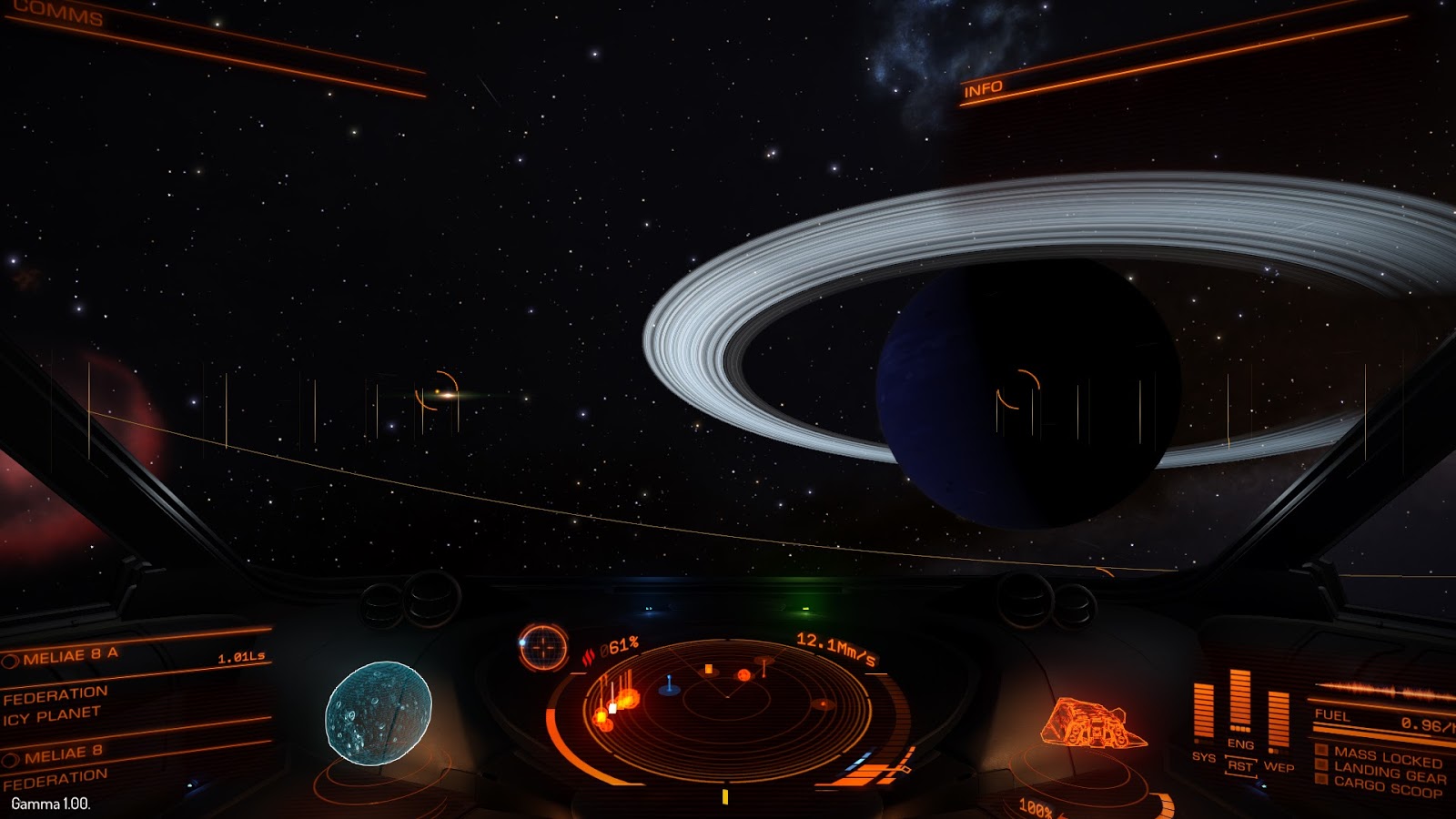 The inner one seems grey... 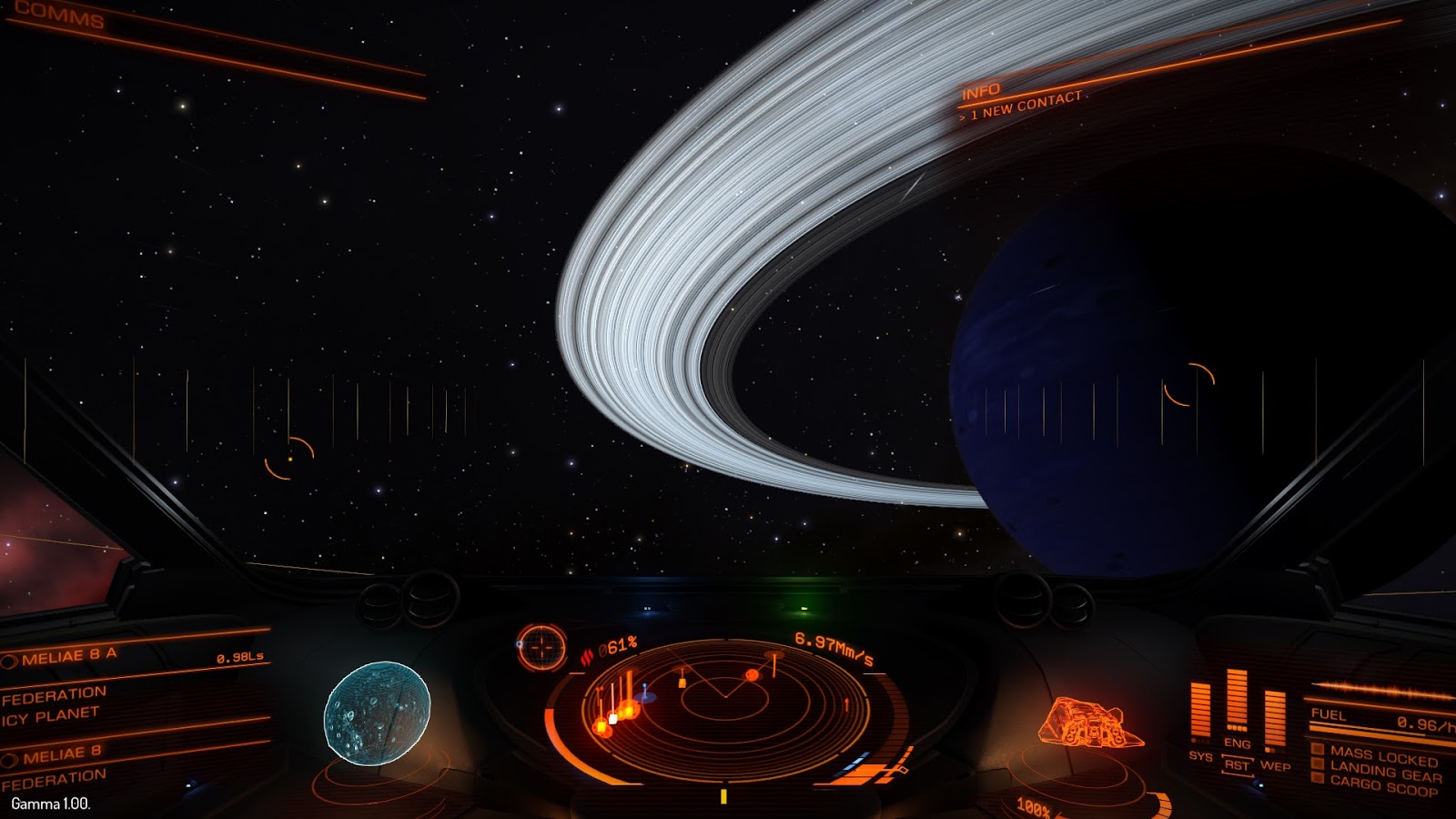 Unlike EVE, you fly your ship.. so I have to manually pilot my ship at insane speeds and shut off my supercruise engines at the right time.. 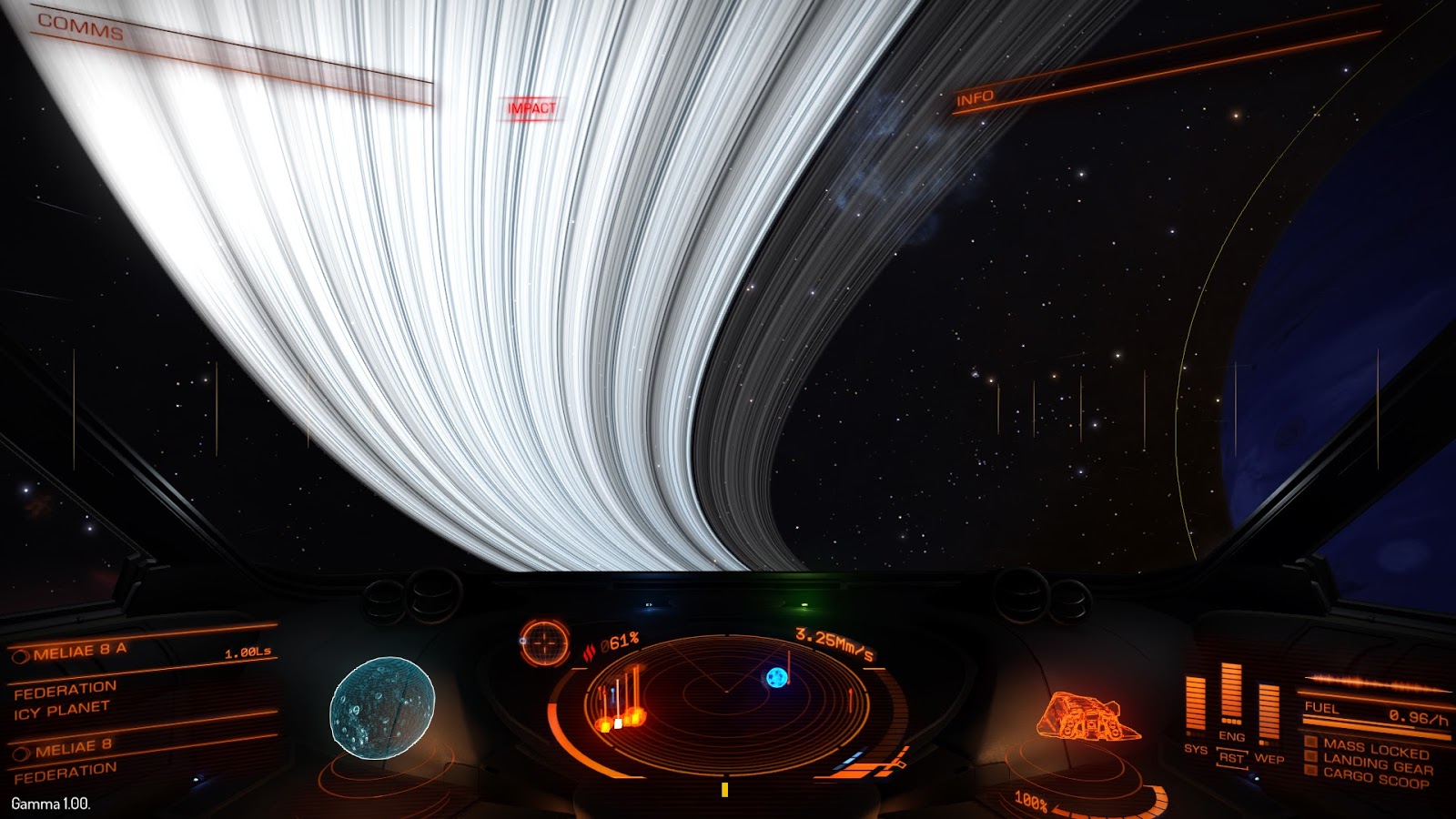 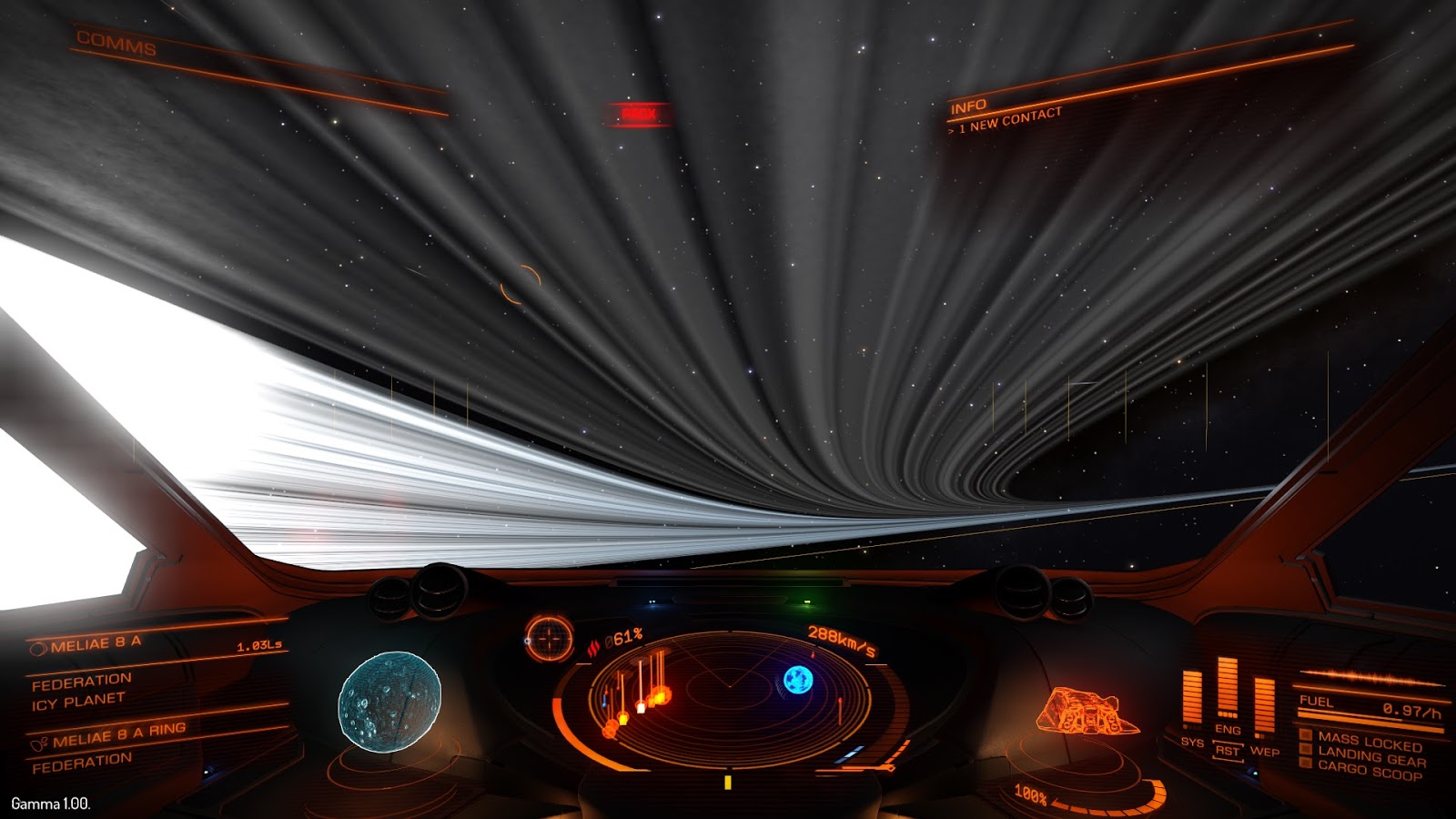 Proximity buzzer is going off, I have to slow down to around 30km/second yet not shut off too far away that it takes eons to slowboat to the rocks 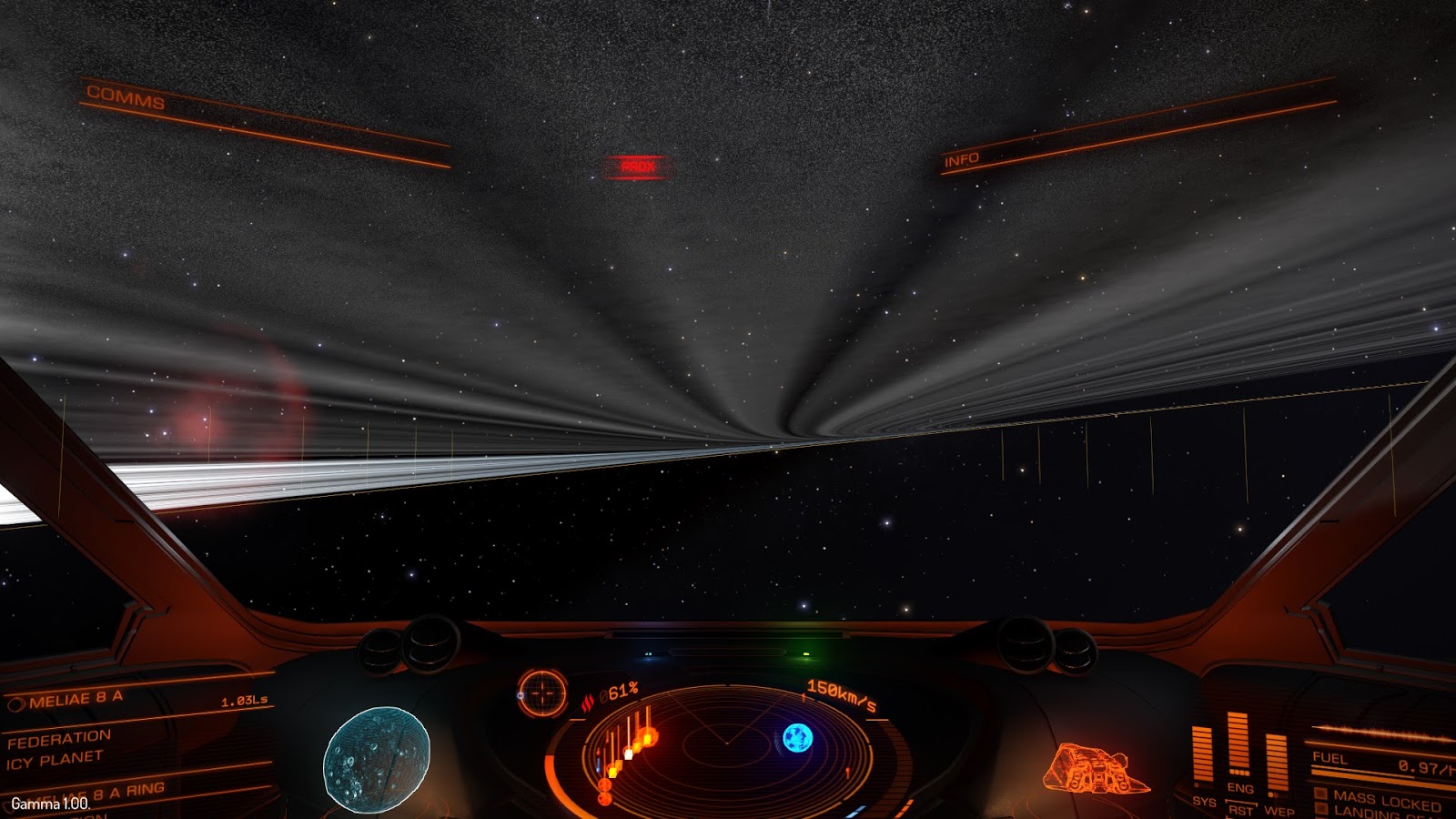 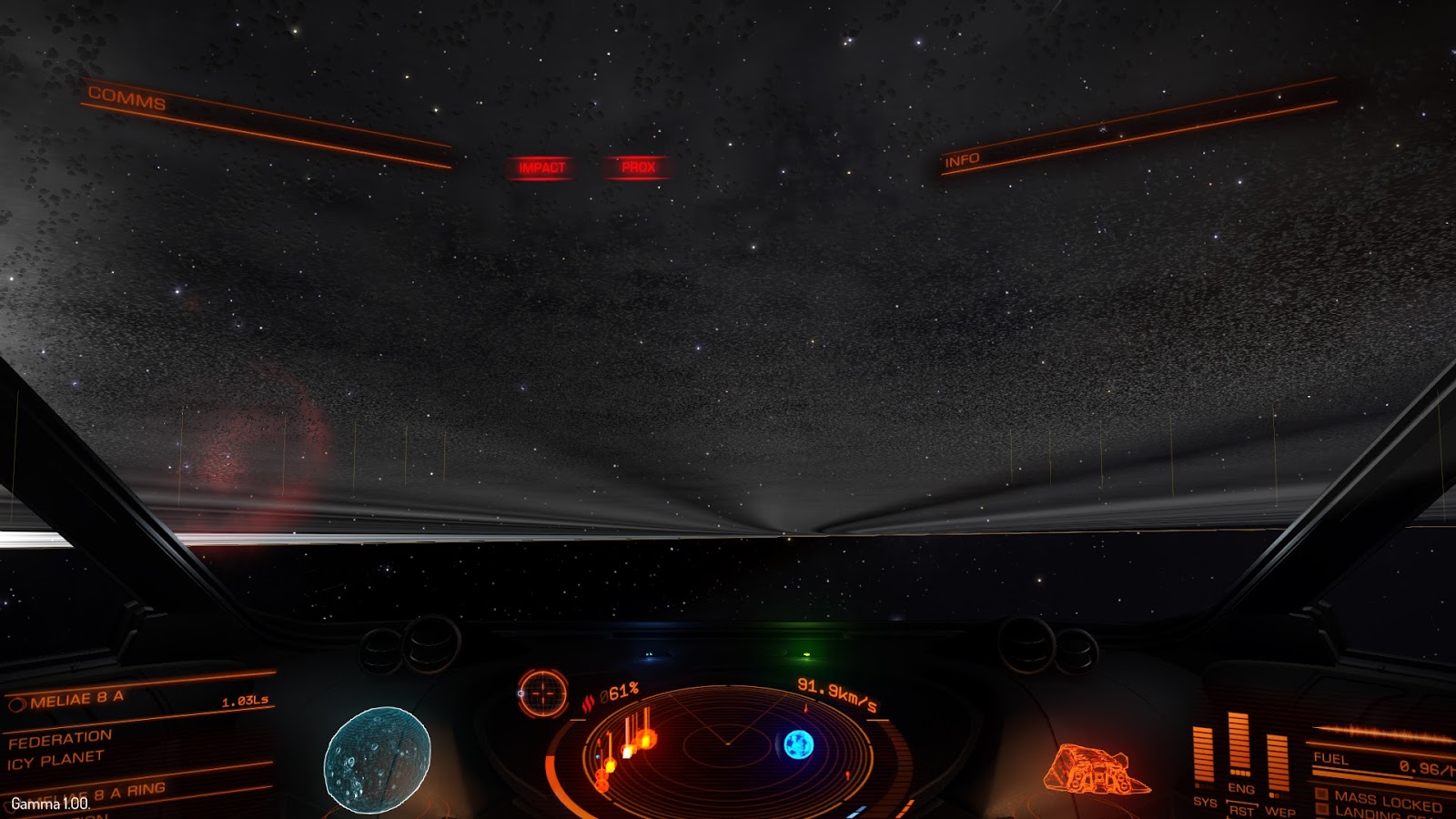 Each of the specks is a 'roid.. no chance of this belt ever being mined out, a-la EVE!! 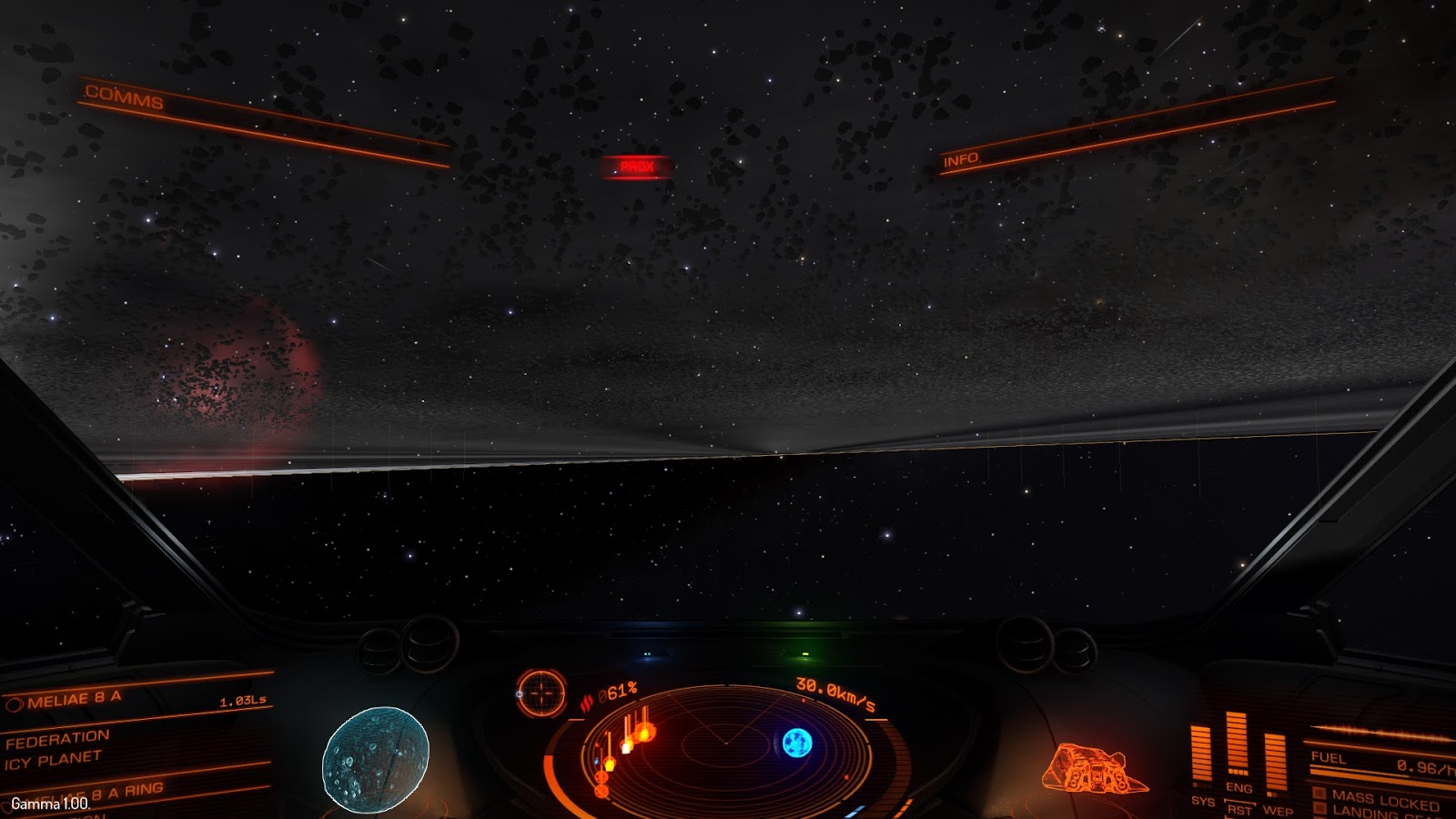 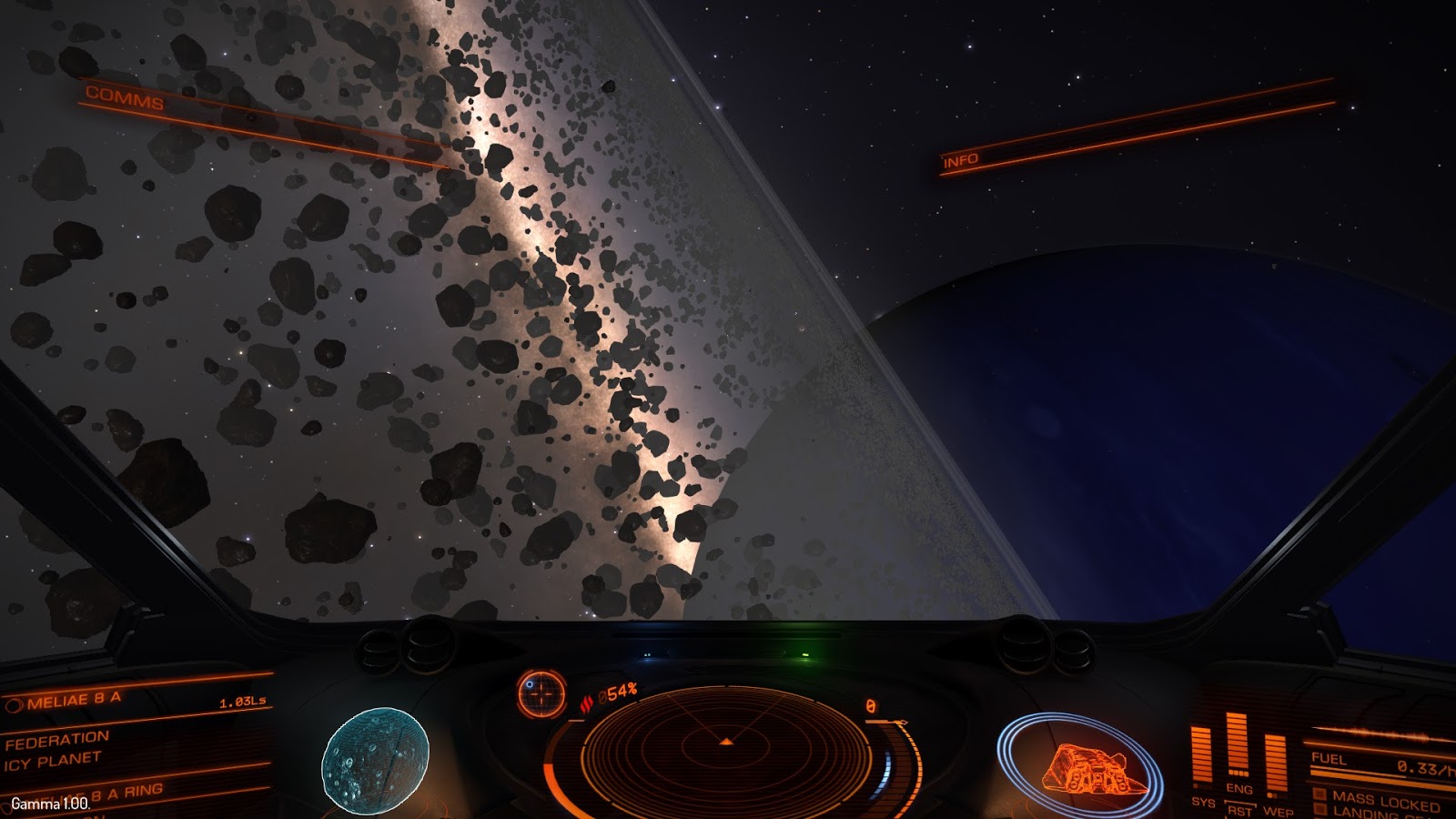 When the main engines kick off, you tumble a bit.. here is the view when I 'land'.. perfect.. now I pick a rock, any rock! 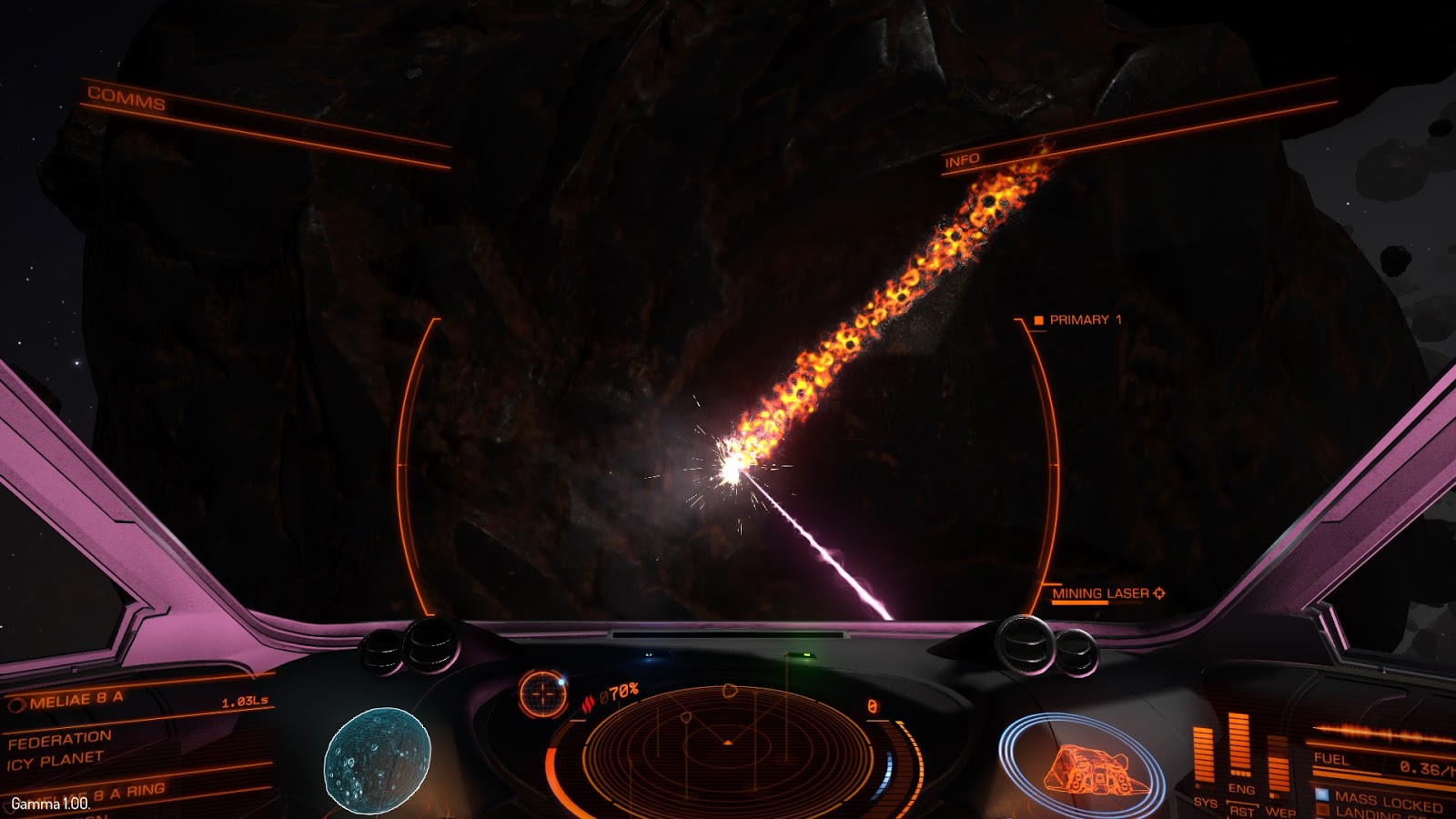 Unlike EVE, Elite mining you just hold the laser down until chunks come off, which you then have to go pick up.  No AFK here.   This rock was spinning and I got close and almost got hit... I was at full stop in this pic, and the rock was spinning pretty fast to leave that 'pissing-in-the-snow' line 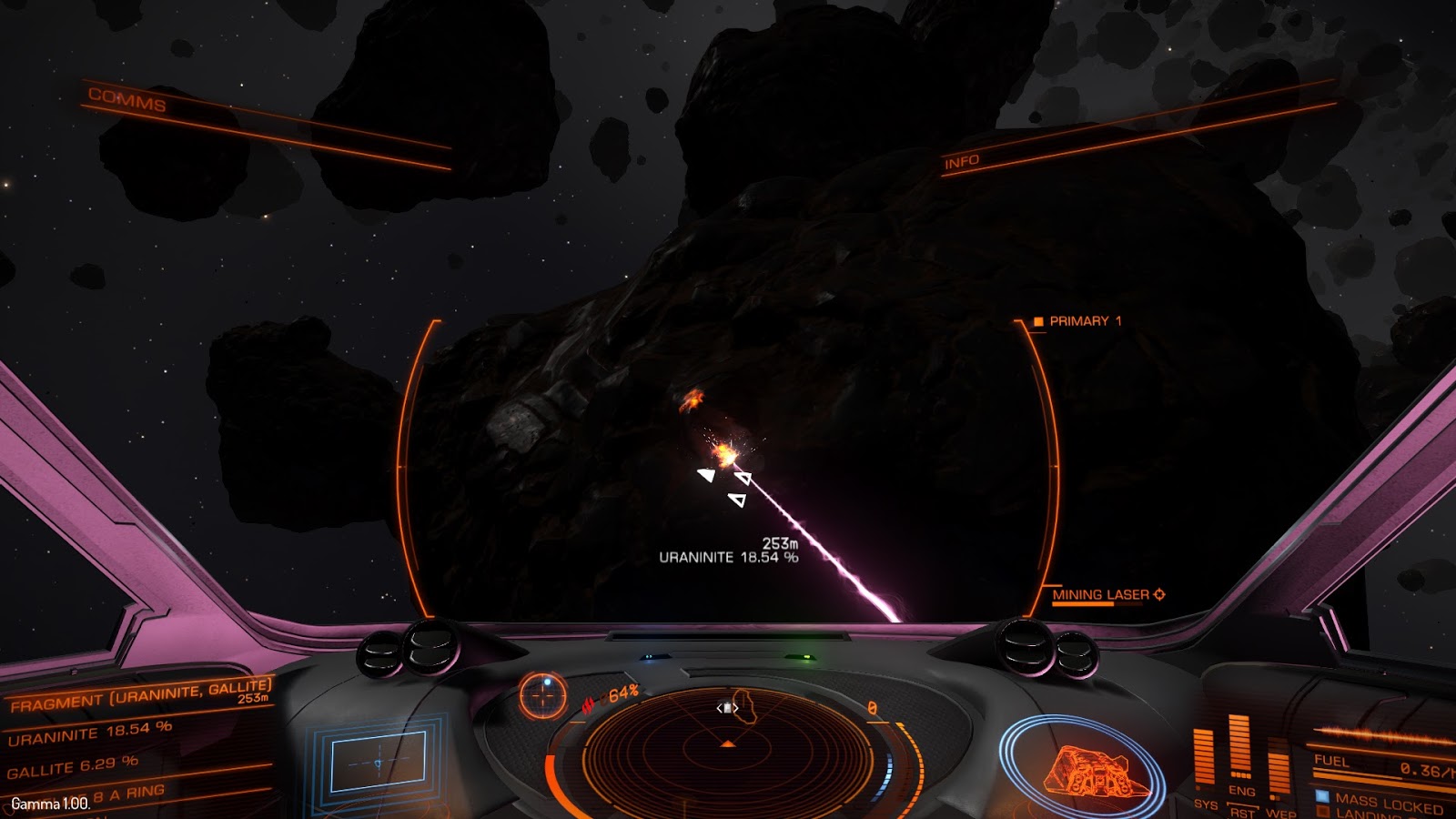 Found a rock that wasn't spinning.. after a few minutes, had a full hold of Uranite and Bertrandite.   Pro-tip: next time, pick somewhere on the SUNNY side to mine! 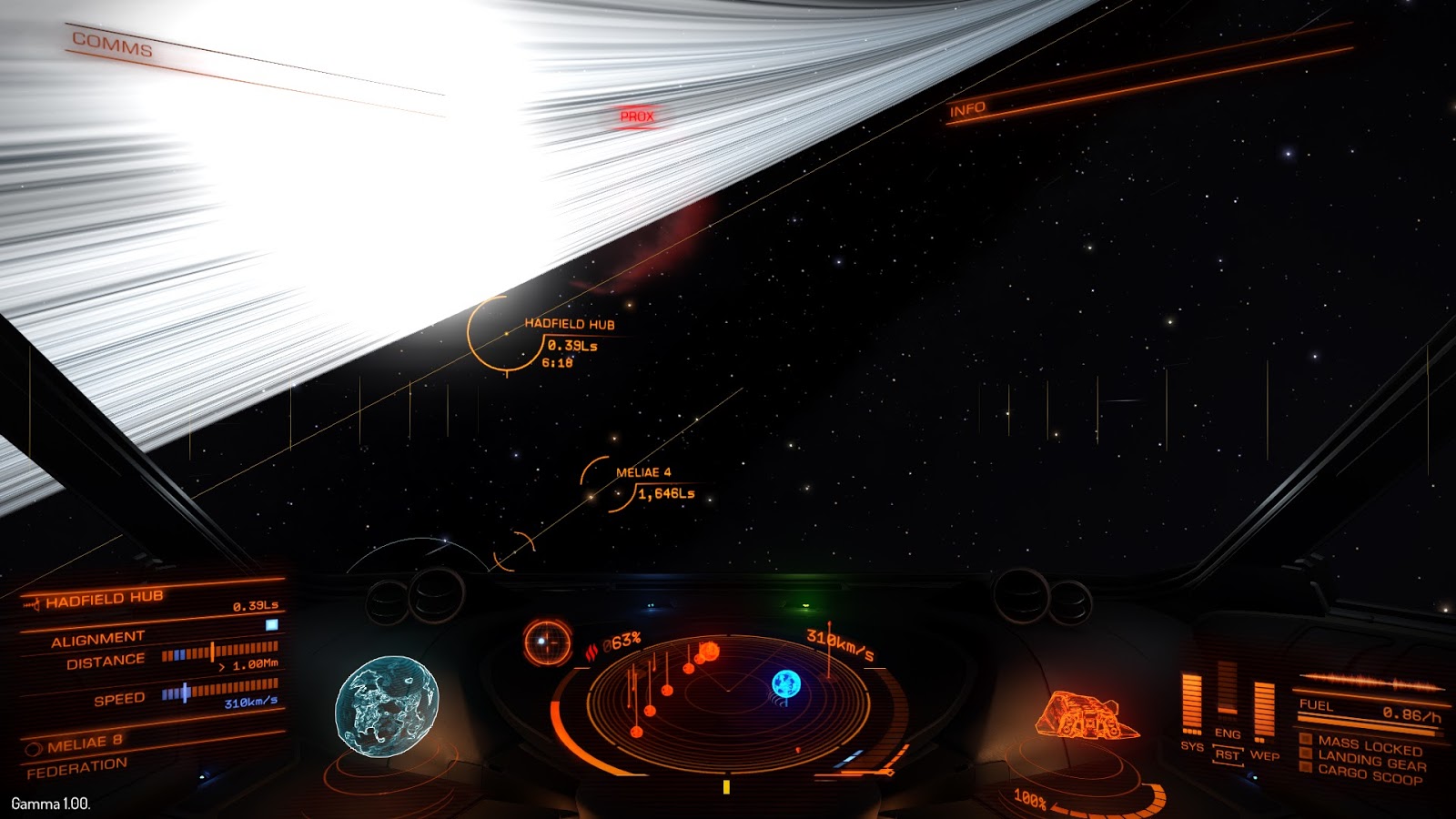 Nearby station locked as target, as I push away from the rings in supercruise.. 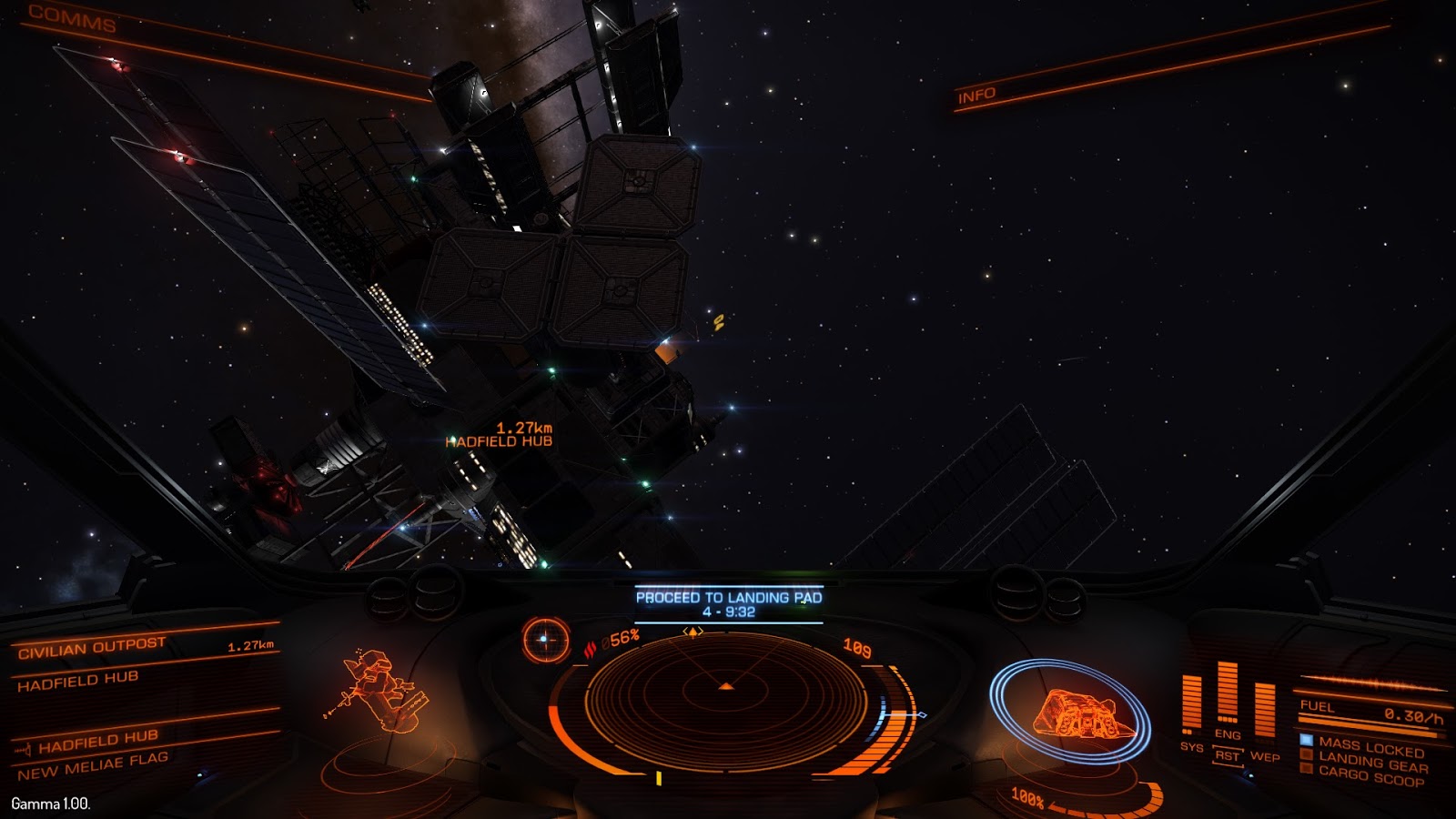 Its another outpost station, so I had to figure out that my landing spot was on the other side.. doh!
After all that, the credits weren't that great, but at least I figured out how to use the refinery.   On the forums some folk are saying they can mine 200,000 credits per hour, IF you find the good rocks.  I did about 2,000 here, but was testing, and in a tiny ship.. <shrug> 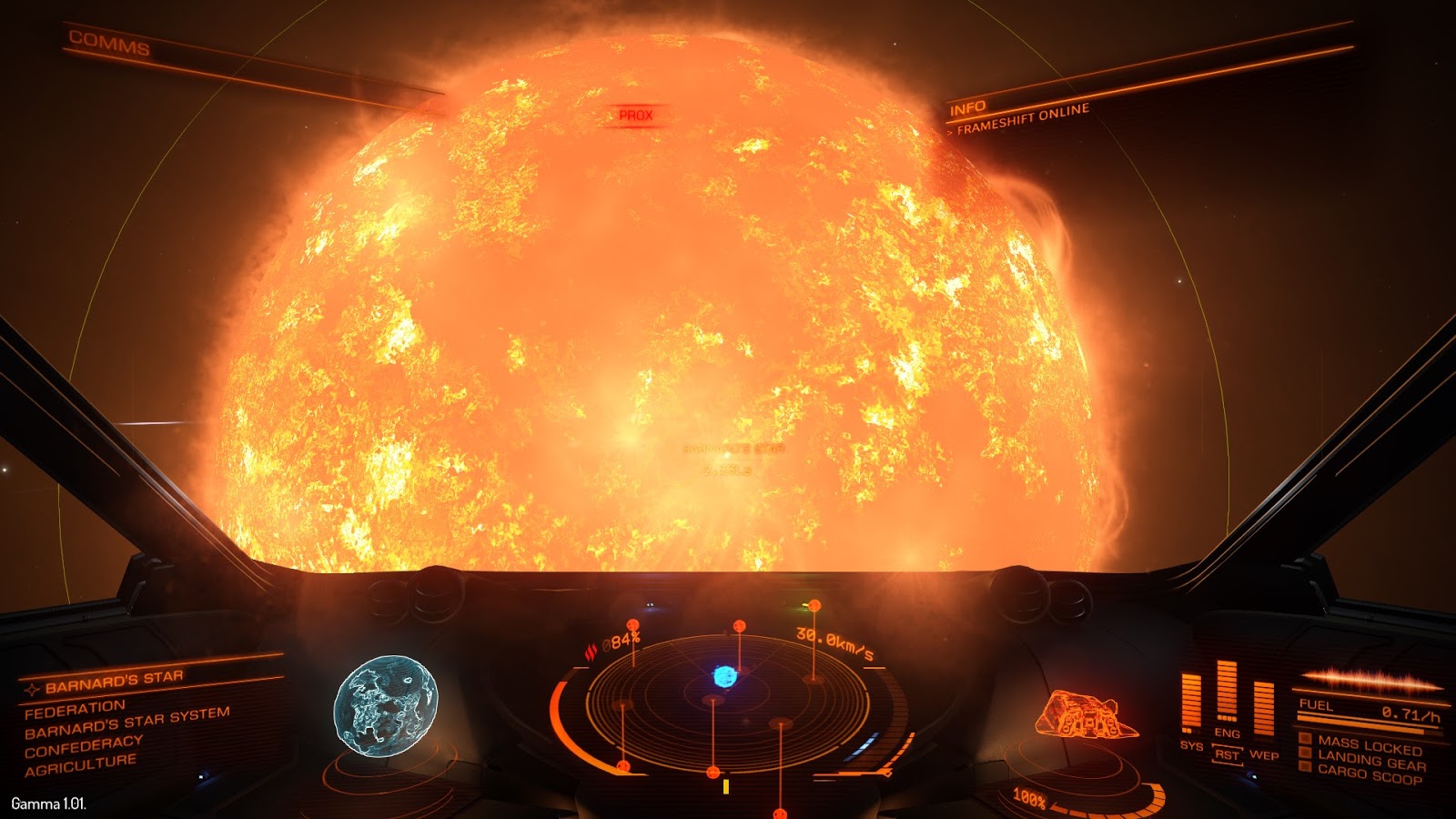 Gamma launch day, all systems open.  Full wipe, but your character starts in one of many random spots.   I had to fly 75 LY to get to Lothlann's starting area.   I COULD have gone to Sol, as it was en route,  but am saving that for later.  I did have to top up my fuel using the FREE hydrogen provided by Barnard's Star on the way though ;) 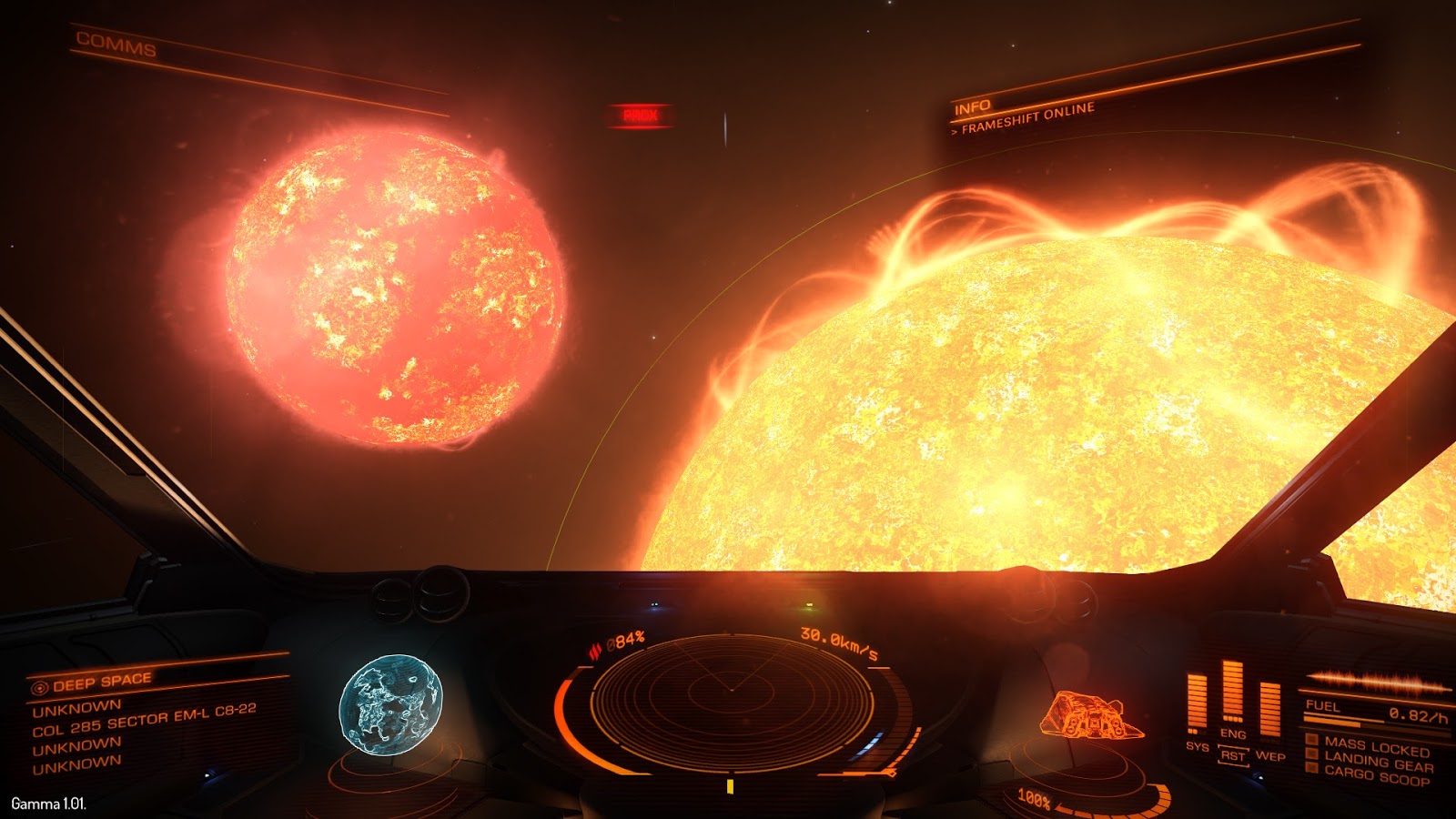 On the way to Lothlann, another fuel top up.. the red giant to the left is actually way larger than the one I am fuel-scooping from.  Huge explosion on the left hand side that I only caught the afterglow of.

They say they MIGHT have to do another wipe before release on Dec 16th, so I have kept my ship docked for now.. plus real life has gotten pretty busy for me also.. Love this game.. just too bad I can't AFK mine / paint like the old days of the WWPD EVE Corp haha!

BTW here is a website that is basically just awesome pics from ELITE:  http://www.elitegalaxy.org/