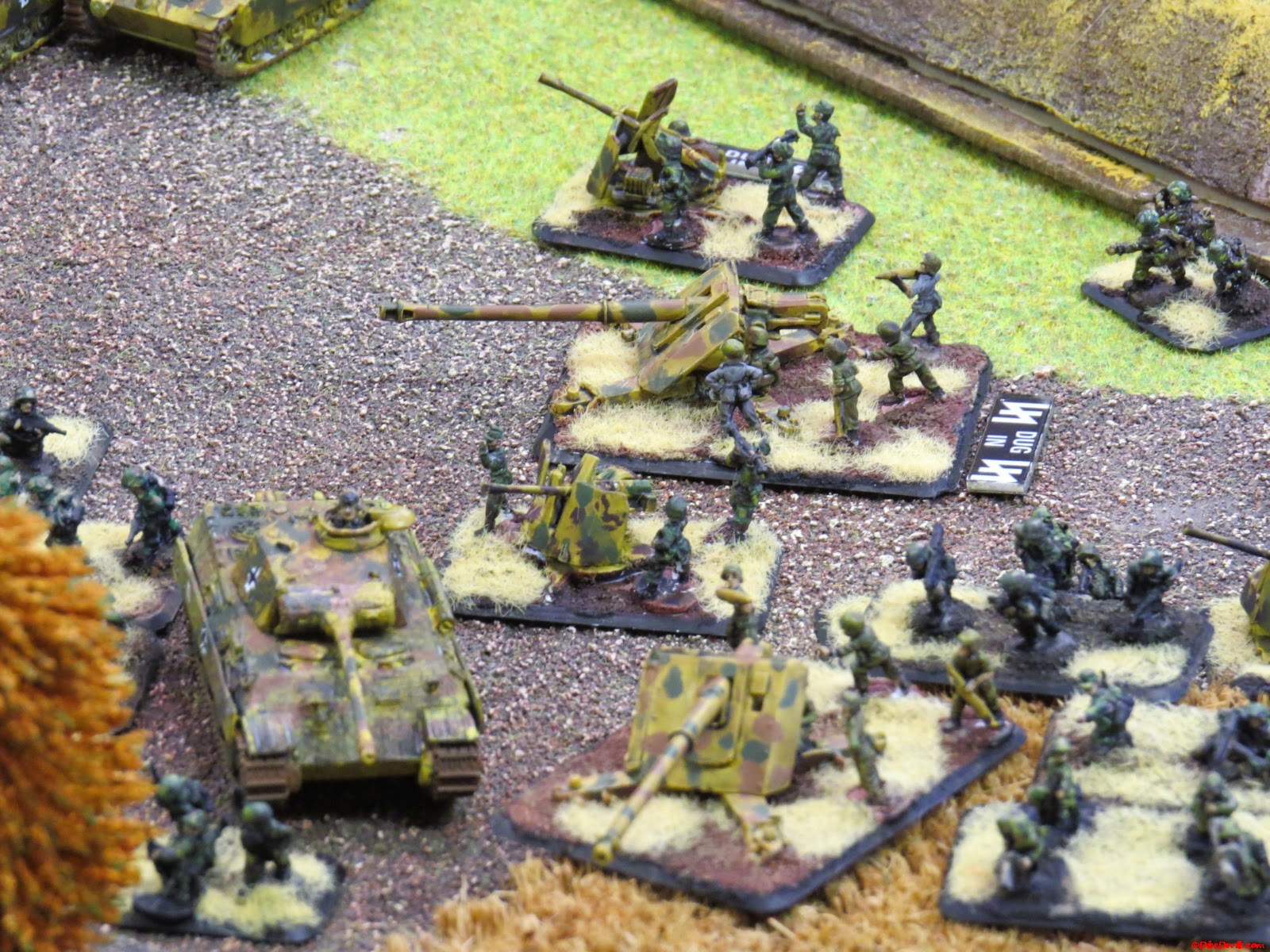 It's likely the last tournament of 2014. Battlecry 2014!! 1650 Late War at Perkins Hobby's in Petawawa Ontario. A few of us made the trek through sleet and snow in order to play in this annual event. Have a look at some of the armies and some of the tabletop action.

If there is one thing I enjoy doing, it's playing tournaments. Something about squeezing three games into one day that makes Flames of War a little more fun. NO sarcasm in my tone here, I really do like playing as many competitive games as possible. Which is strange, because I am not a power gamer, I rack up way more points for sportsmanship than I do for wins. It's also due to the fact that we do not have as many events in our area to play in. I like playing games against opponents I would not otherwise play in my circle of friends. Sometimes though, it doesn't work out that way, this tournament I would play against three people I have either played against in the past or play against frequently on Friday night. Including Alex, who was my opponent in game 2, it would be our third game in three days! 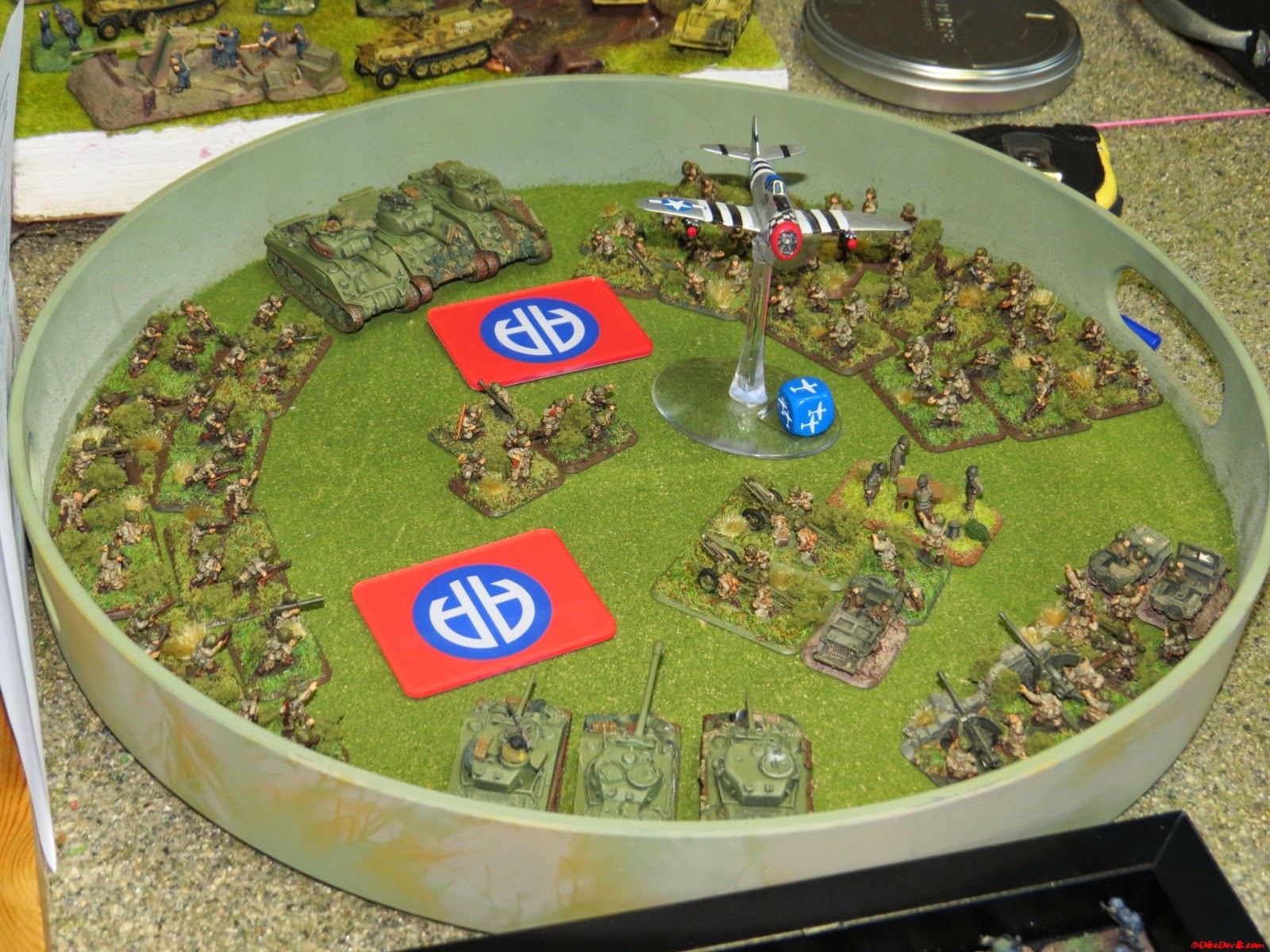 My 82nd Airborne made the trip to this Late War event, I had not played them since taking them to Historicon 2013. A fairly straightforward list, I wanted to have a decent number of stands I could dig-in if necessary. The smaller 75mm can provide a small template of smoke, while the British tank support could counter 'most' armored threats. I prefer to be on the offensive, as I have learned that Fearless Veteran Infantry can be deadly on the move, and can survive without armored half-tracks like the Germans get. Tanks with the higher AT/Front Armor ratings would have to deal with my P-47 in Air Support.
See artist 'concept' below. 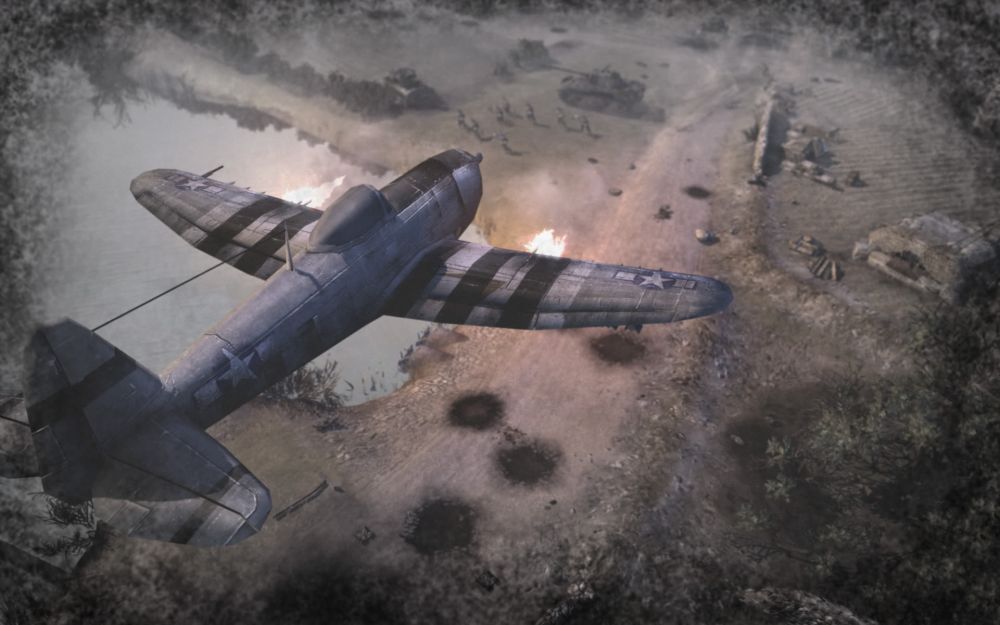 Nothing like air power doing the talking while you 'Sitzkrieg' your way to victory. 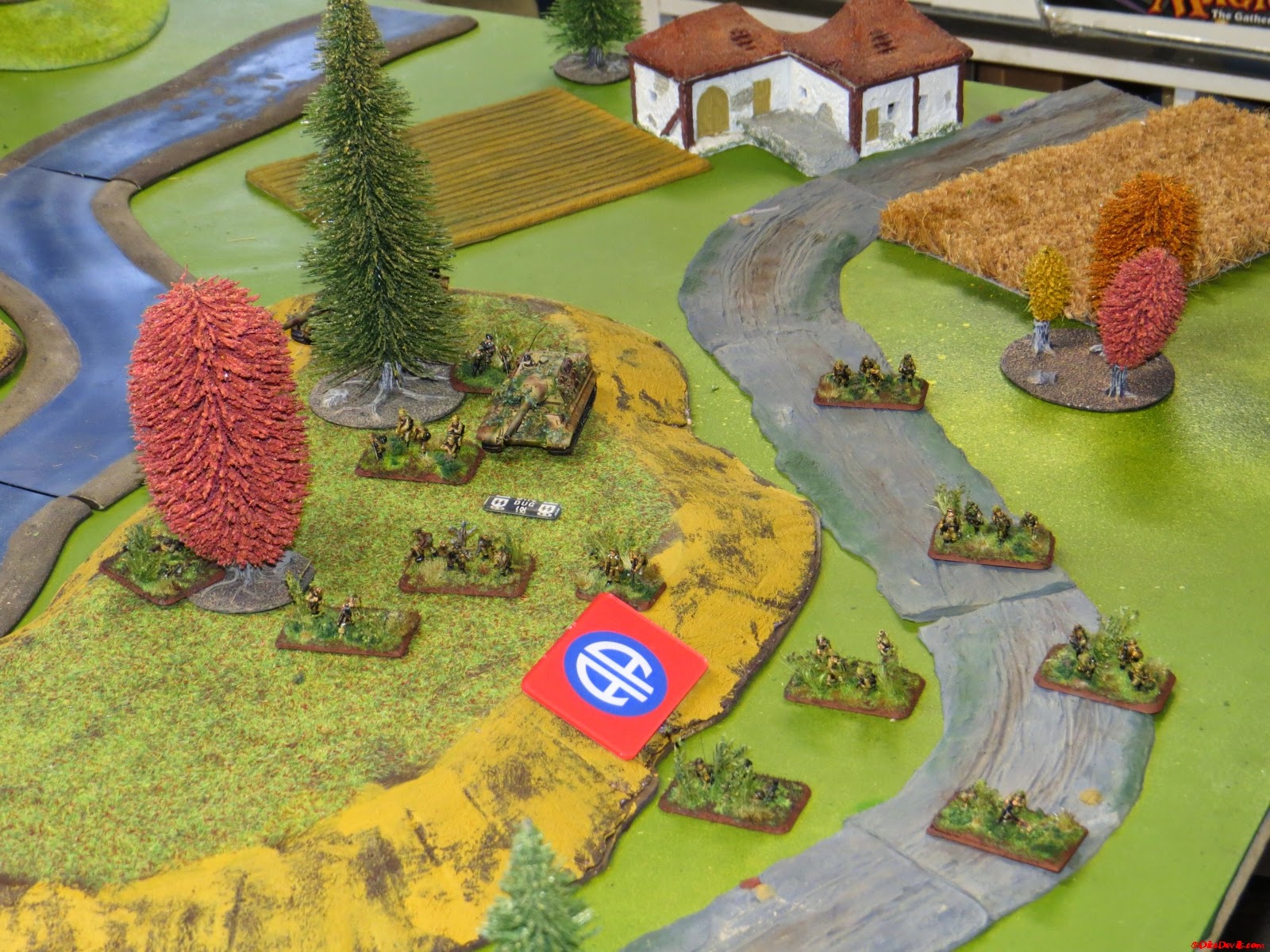 Bob McBride has his Infantry/HMG stands dug-in with Jagdtigers in overwatch. This auto defend list was a real test and other than trying to hit his tanks with aircraft. There was little the Shermans of Firefly tanks of the 11th Armored Regt. could do. I had them smoked most of the game, managed to bail one out but that was about it. 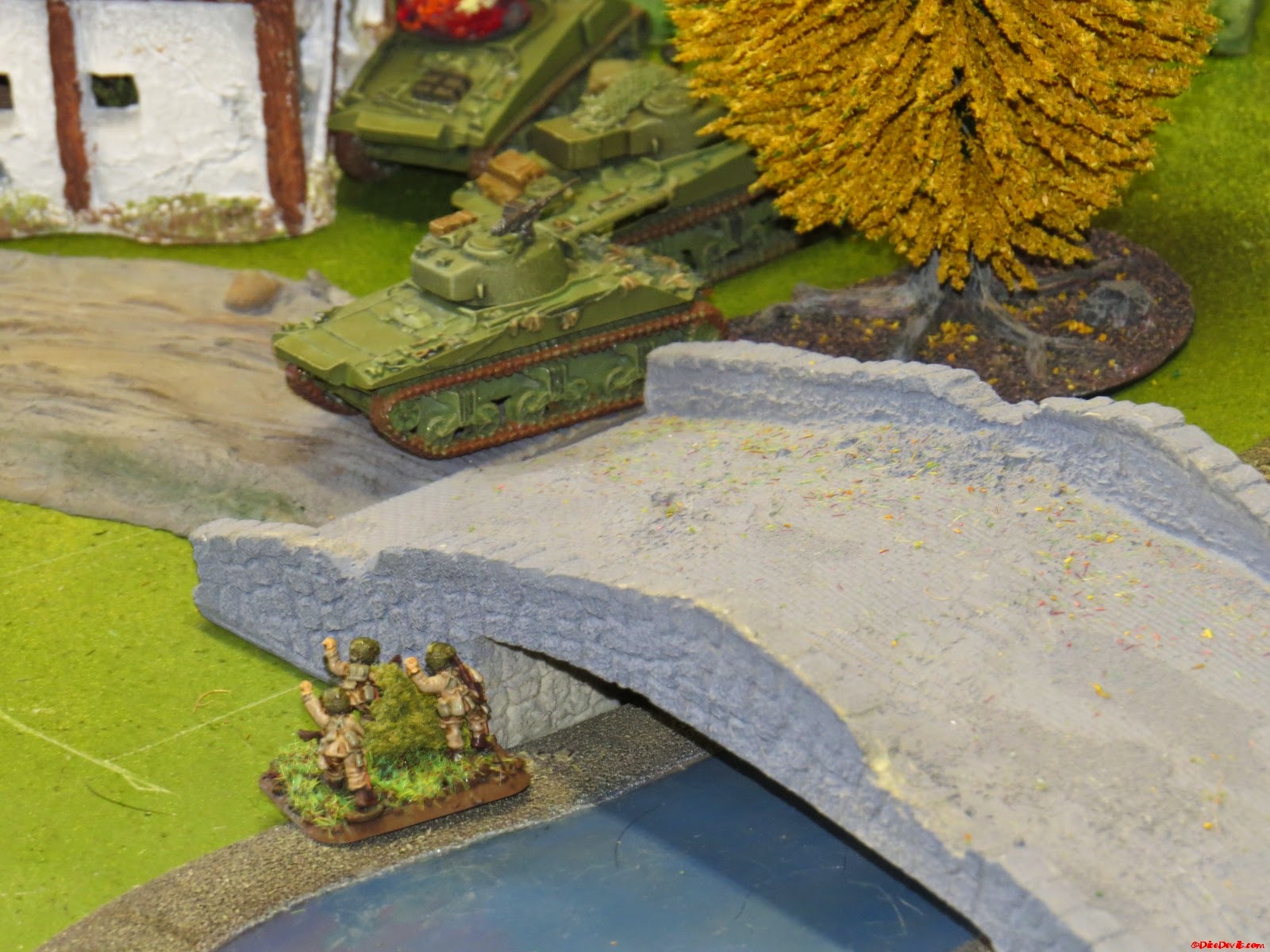 The 2i/c made this dash across a small river in order to appoint another tank commander so I could get this platoon on the move! They managed to kill a few stands of Bob's anti-aircraft battery, but contributed little else to the battle. 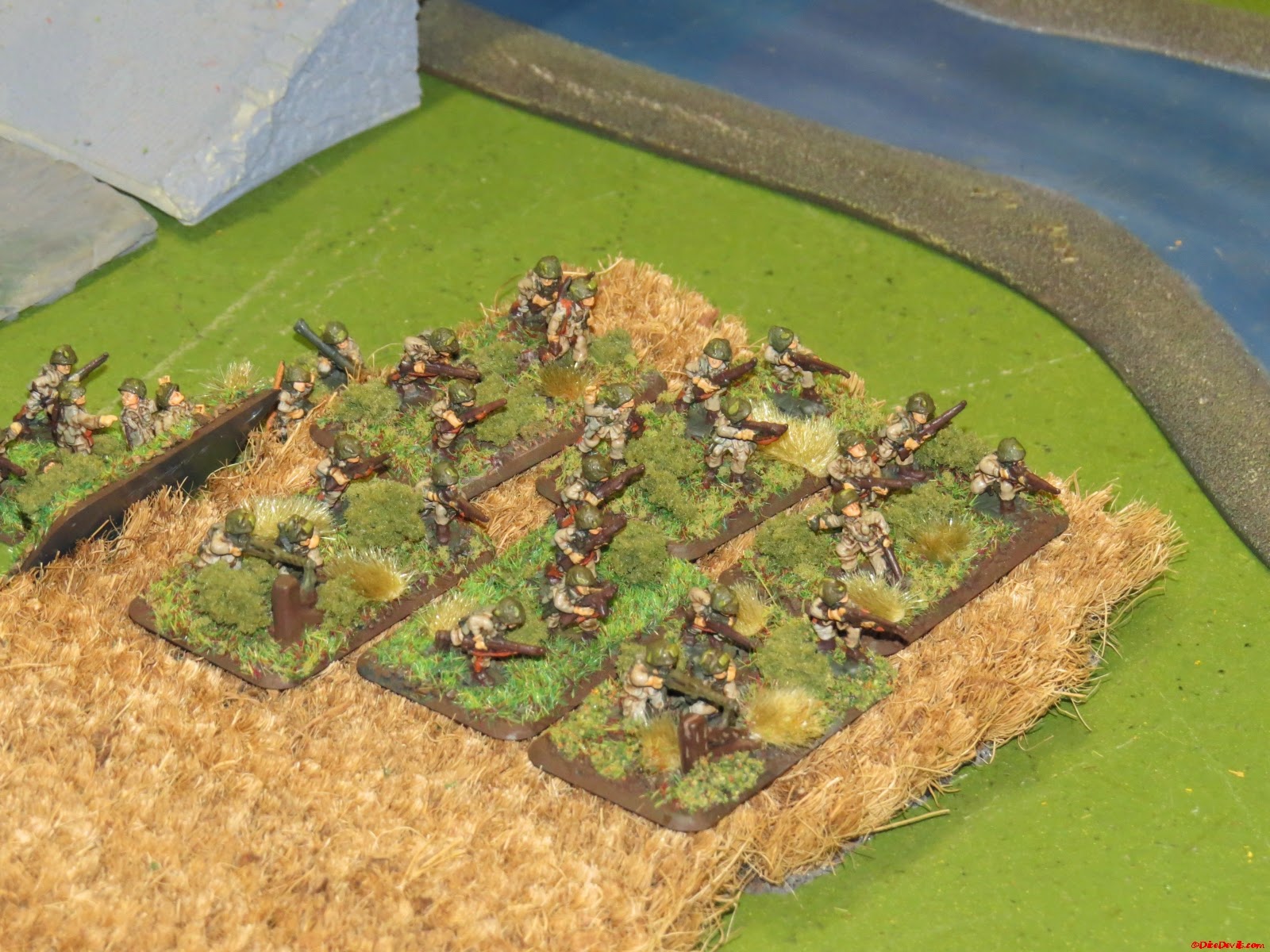 Managed to keep one of my platoons in close range for an assault. Without being able to take out his HMG's, I couldn't get them into the open without the prospect of running into 24+ MG shots for two turns before being able to close the gap for an assault earlier than turn 3 or 4. 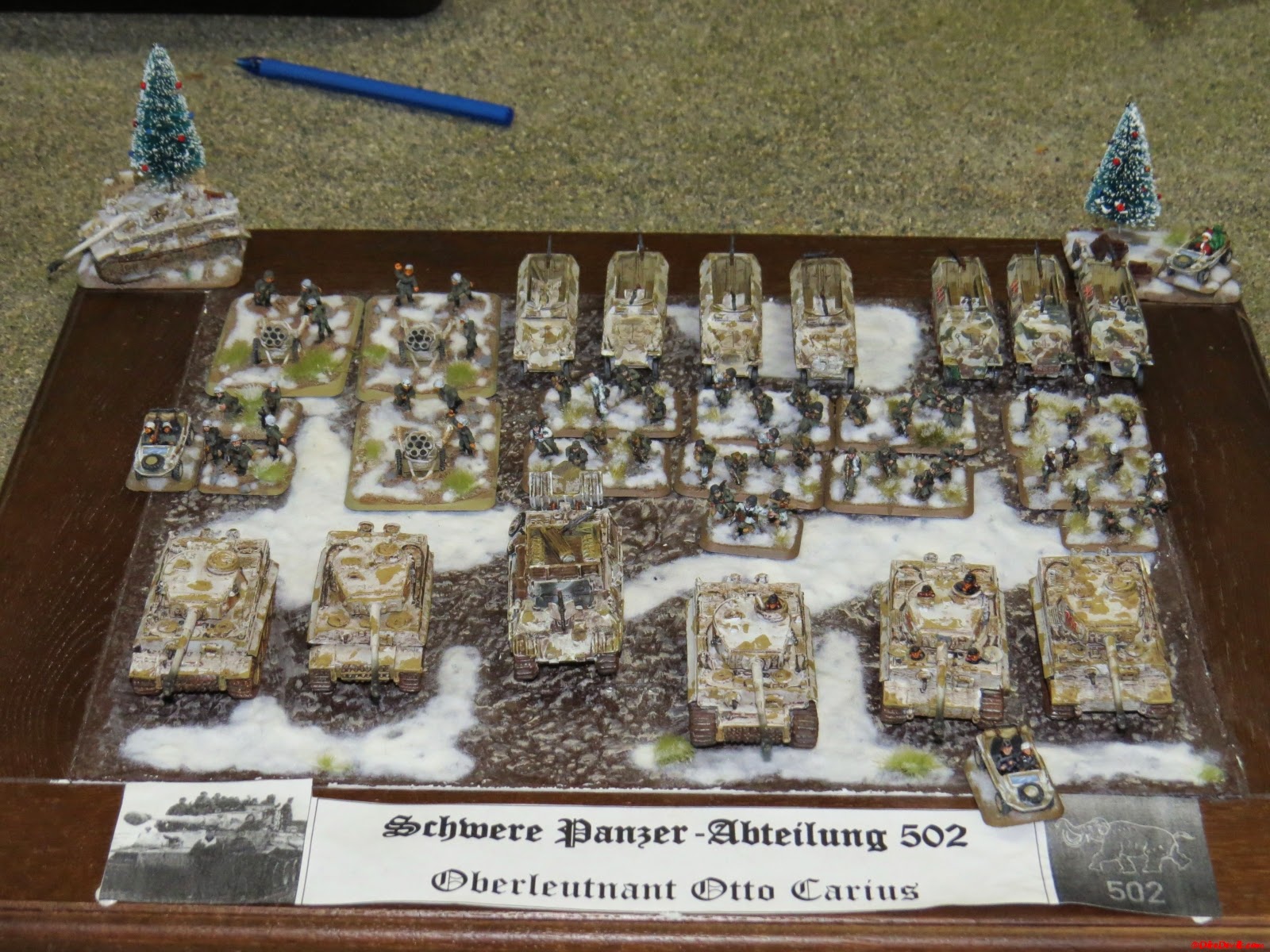 Rob's Otto Carius German Tank Coy. Normally a player who ONLY plays Canadians, Rob Kelly decided to bring out his Germans to this event. Some really nicely painted stuff, he managed to come away with Best Painted Army. You'll note Kris Kringle in the objective at the top right of the tray. 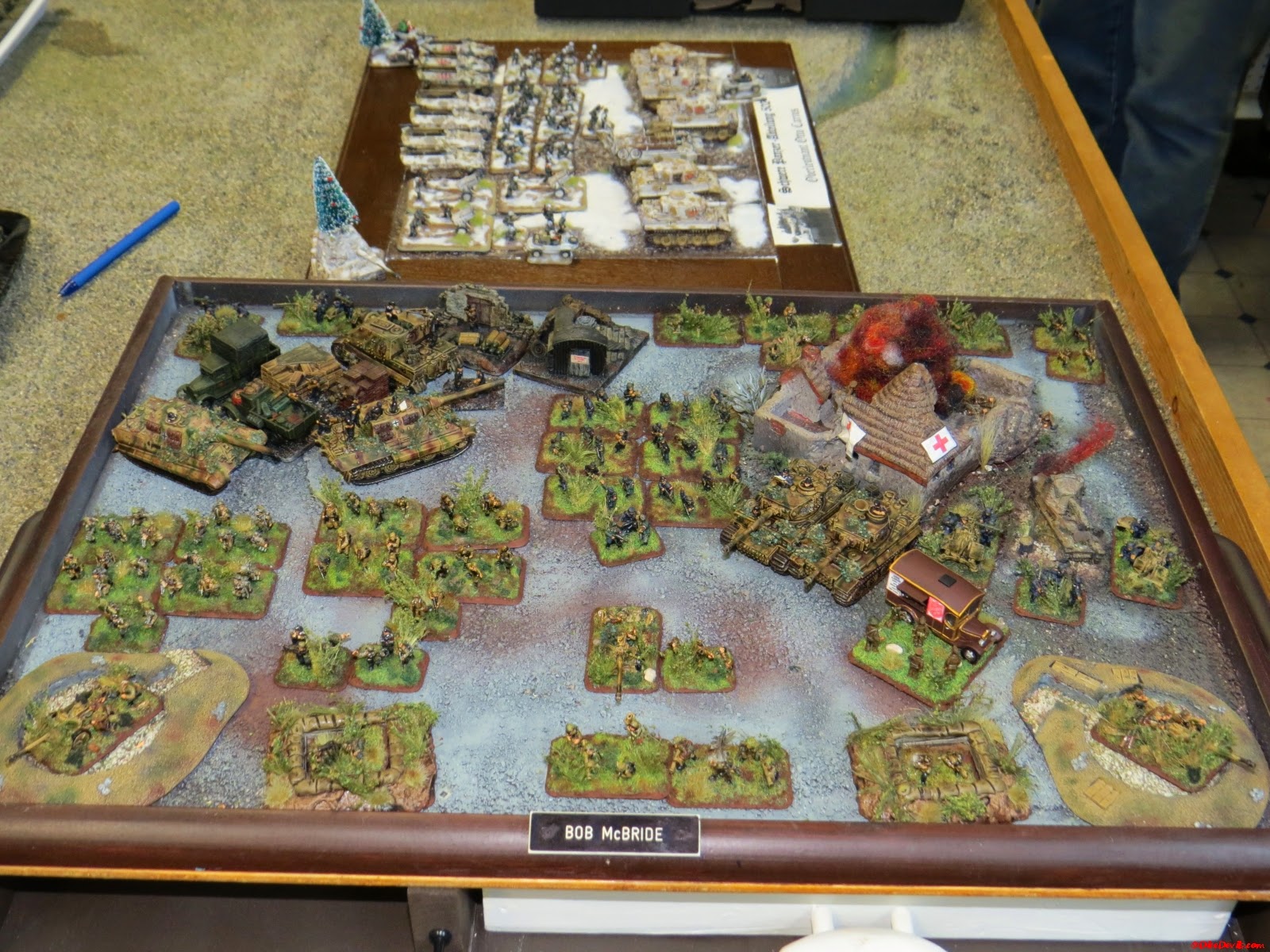 Taking Second overall at this event, Bob McBride and his mix of armor and small infantry platoons. This made for a lot of headaches during the tournament, as not a lot of people had answers for charging into German heavy tanks for two hours. I enjoyed my game against this list anyways, despite me coming out with a 1-6. I went on to win my next two games, 4-3 and 6-1. 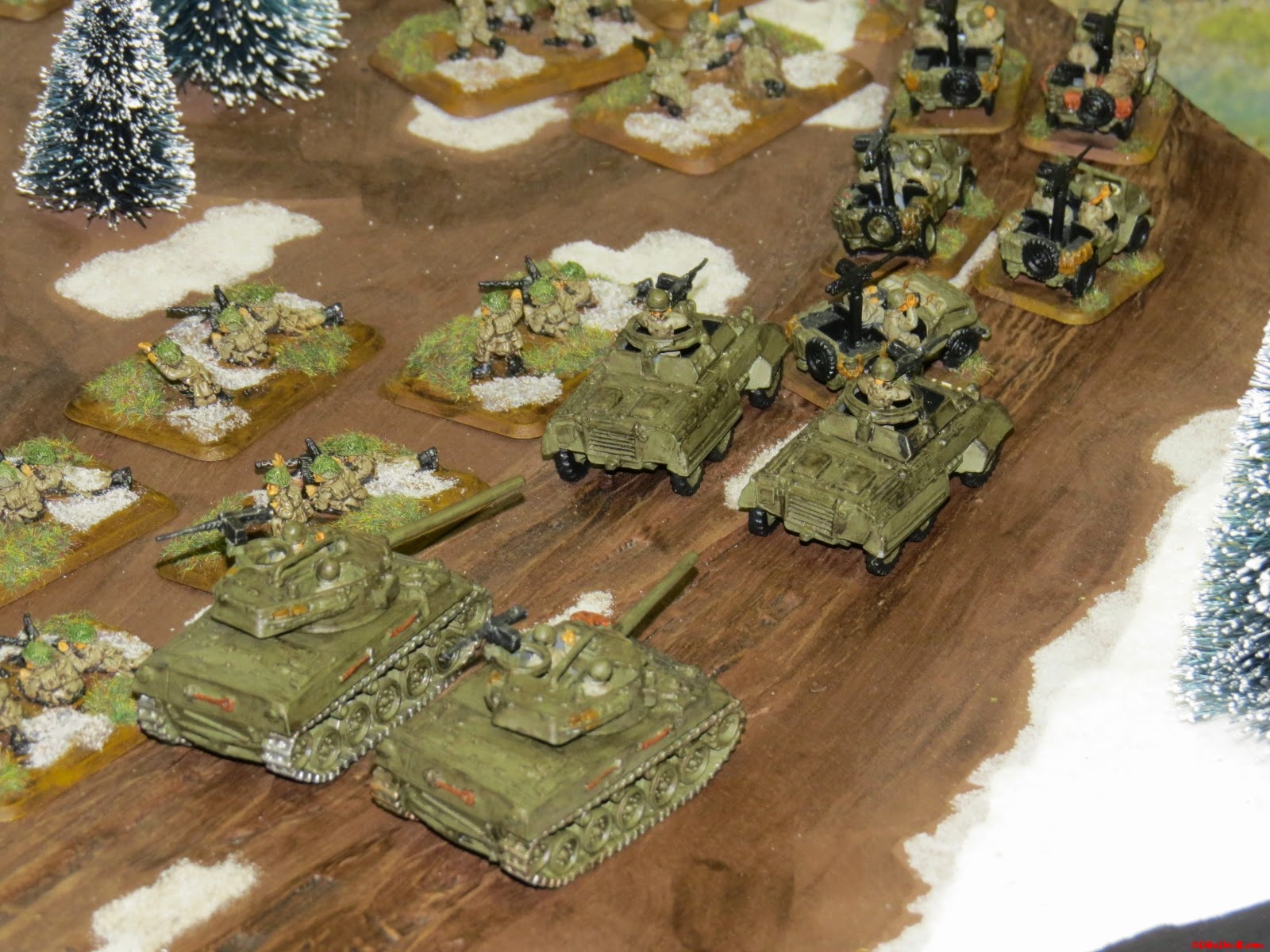 Americans roll on down the road. This tournament had it's fair share of German players, with 7 out of 12 players playing the Axis. 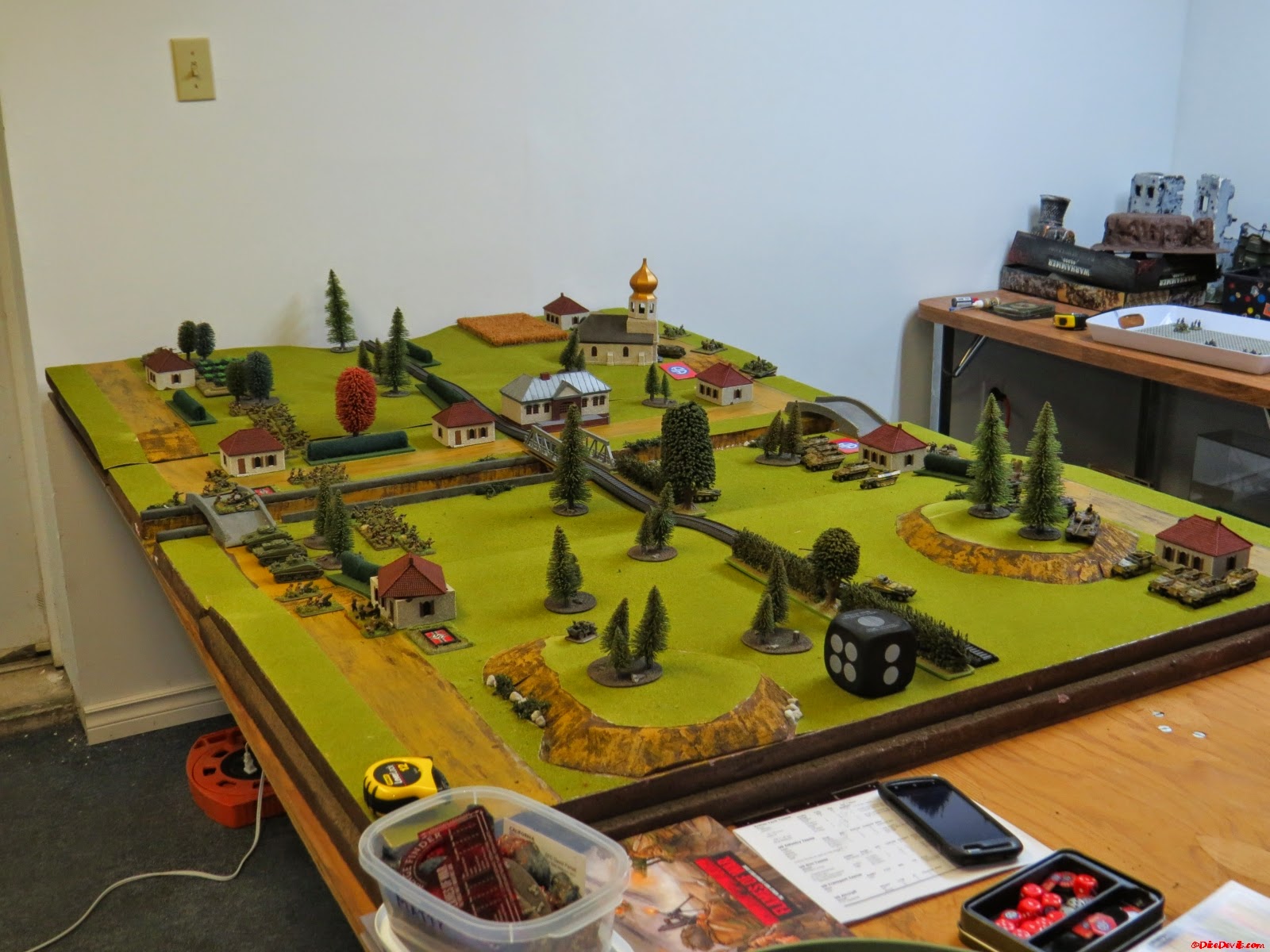 By far the nicest table they have at Perkins. This table has it all, a river running down through the center with train tracks that cross over it. I played on this table in my third game of the day. I faced off against my good friend Brad, who was playing his German list of half tracks and armored support. 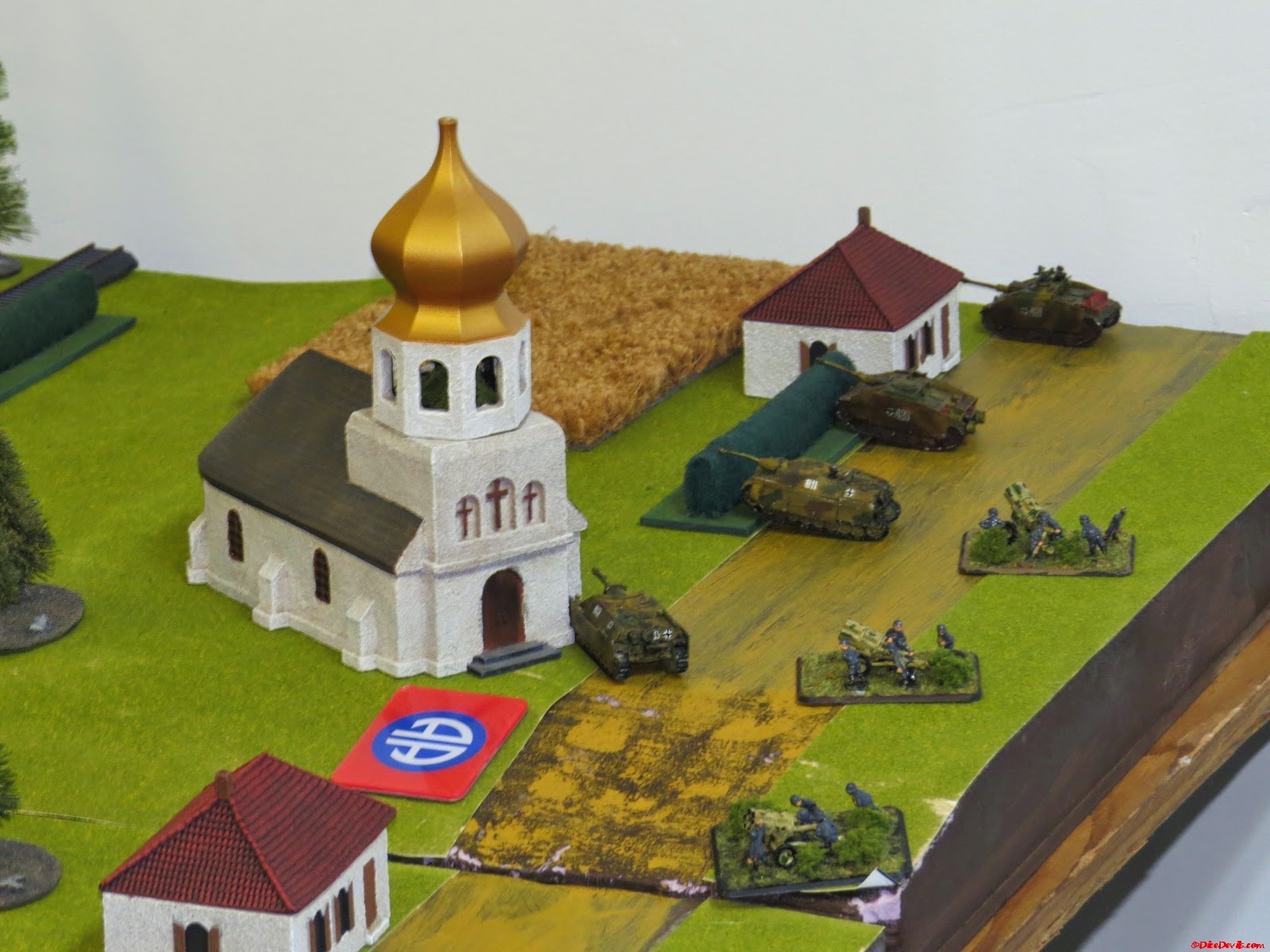 Jagdpanzers and a Nebelwerfer battery keep watch on the objective. Crossing into the open would be my only option to try and draw him from cover. 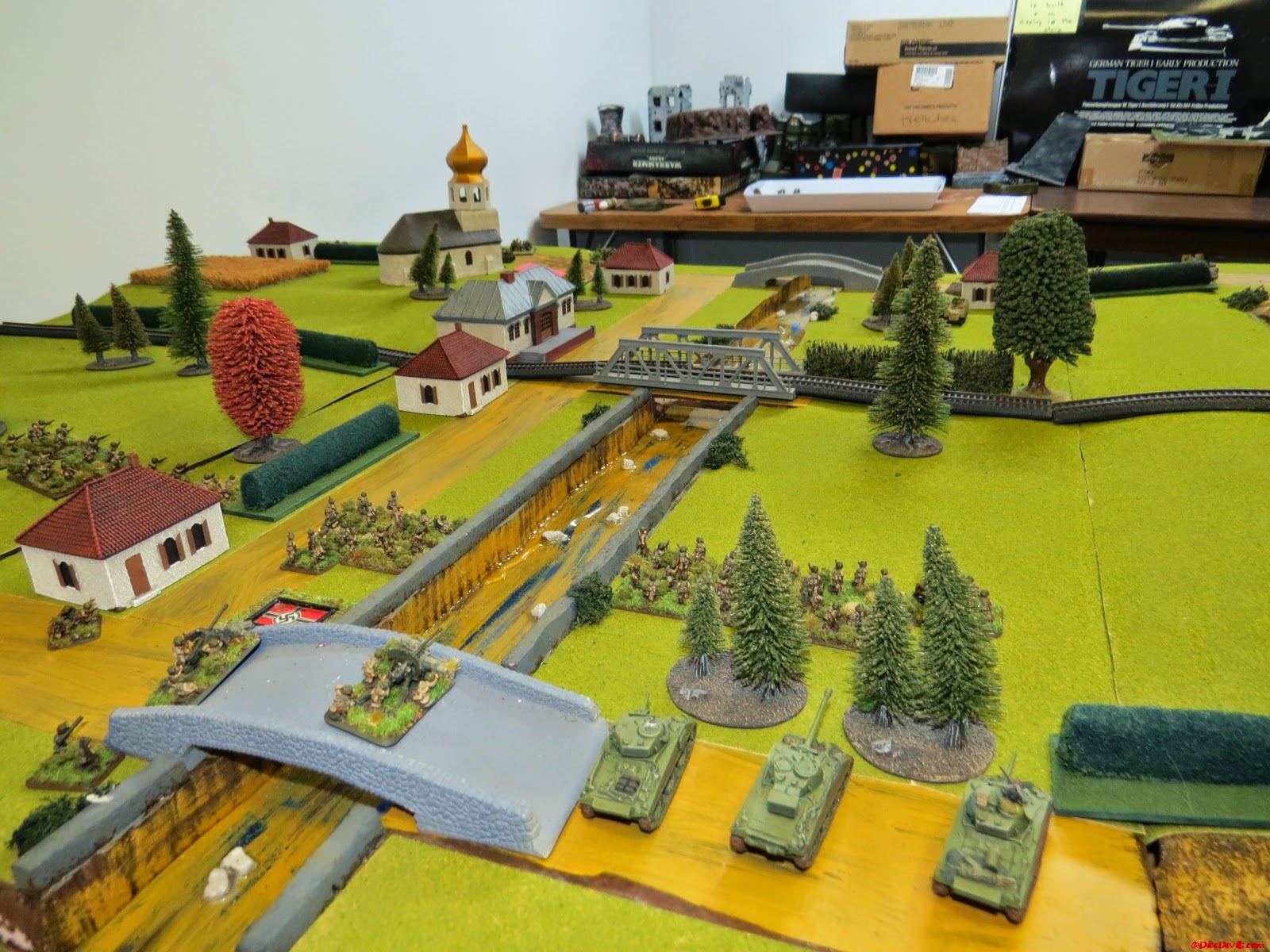 Initially I was going to try and get down the center of the table and make a break for the objective on the left side(church). Brad quickly re-deployed his half-tracks to counter this and I had to pull back and dig in on my own objective. Here my 57mm guns went to work and were able to destroy a few vehicles. Brad had to ditch the idea of them coming across the center of the table and repositioned to take the flank instead. 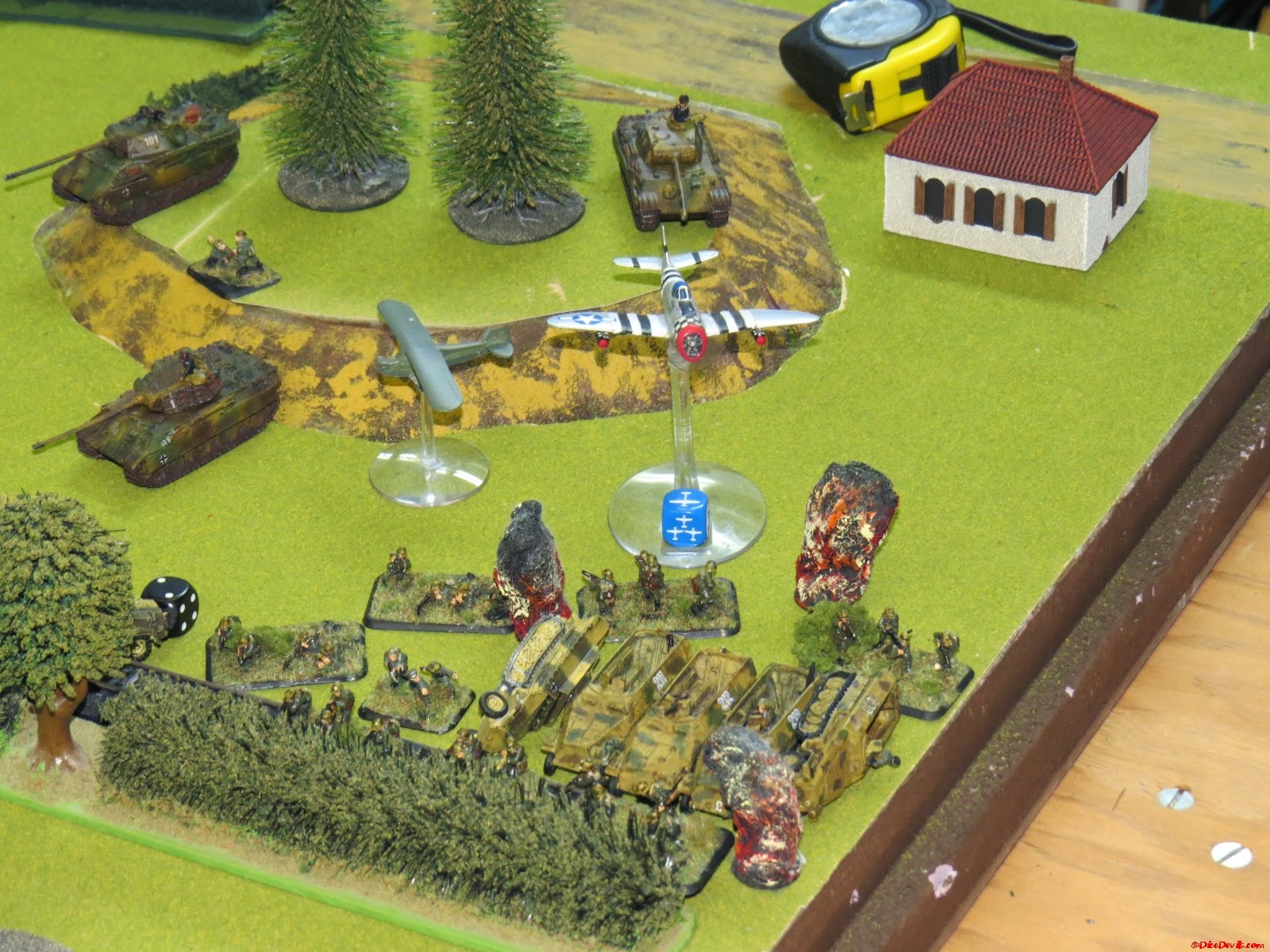 Germans run for cover as they get attacked from above!! My P-47 swoops in for a couple of kills, including the half-tracks with the AT guns on them. Ranging in on German tanks when they are close to terrain is a better risk later in the game. Note: Use your air to get some stuff off the table early, it might put you at an early advantage and your opponent may slow his advance a bit until he can re-enforce his now smaller platoons. 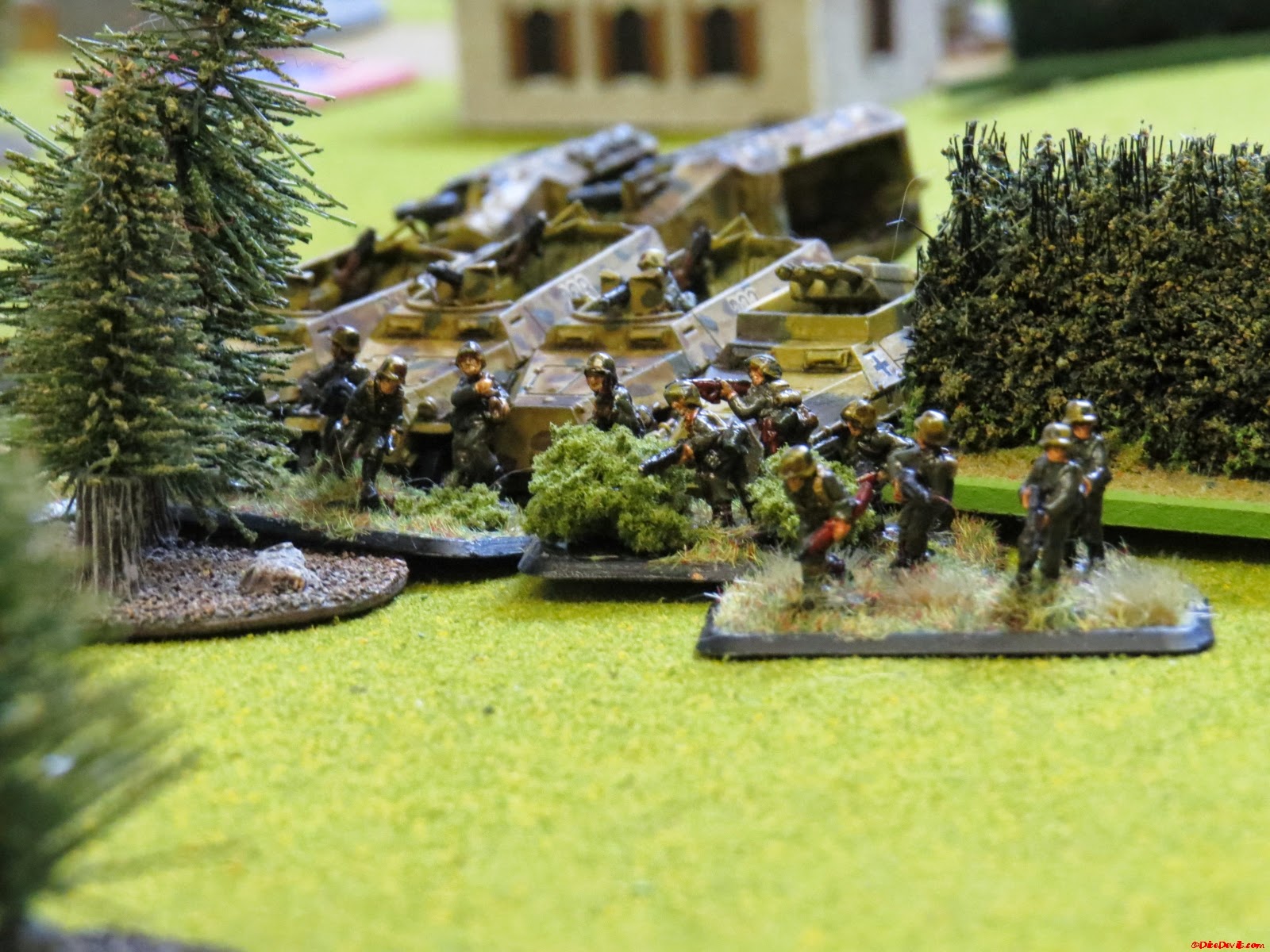 Tight squeeze! Brad moves through the hedges in order to try and take advantage of cover and make his way to the warehouse on the side of the road where the 82nd were stretched thin covering an objective! 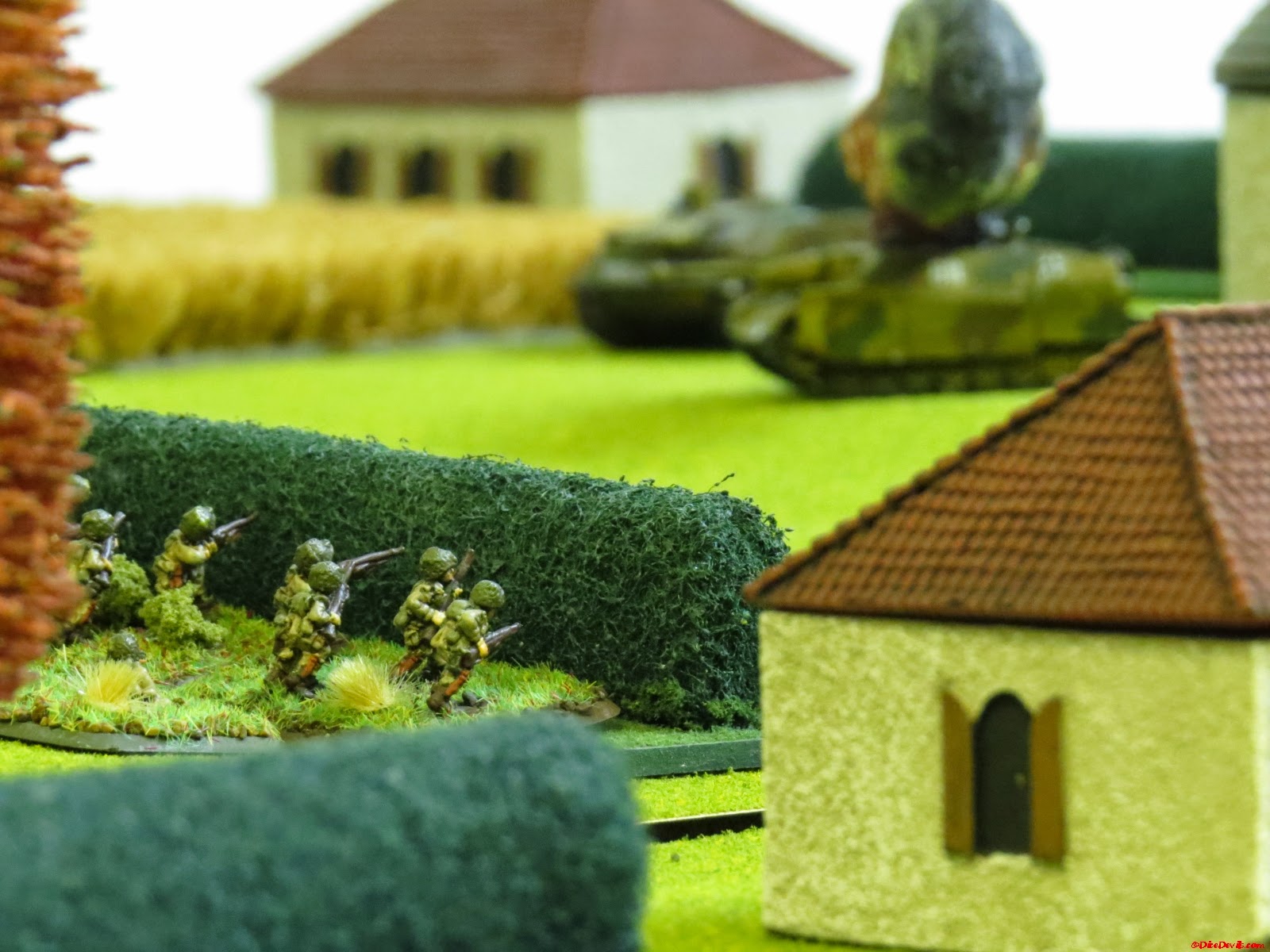 Paratroopers look on from the safety of cover, Brad and I exchanged quite a few rounds of fire from each of our tank platoons. I was able to make a few more saves and came away with routing his platoon on the far right side. 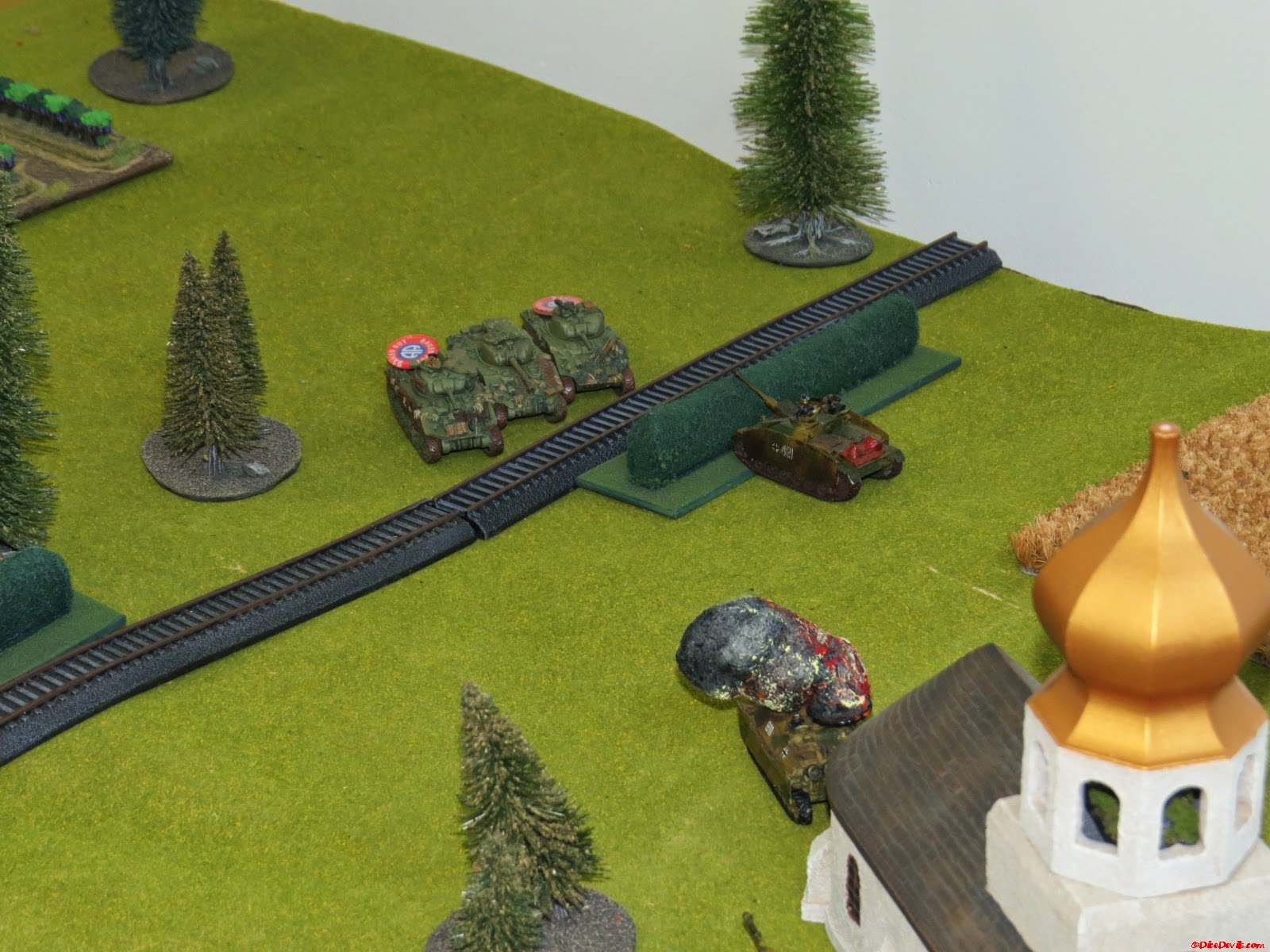 Shortly after this was taken, the British crews were back into their tanks to take on the Germans! Without having to cross into enemy territory, we each made effective use of cover in order to take shots back and forth for a few turns. Seeing that all was lost, and the prospect of an all out assault with very few stands, the game was called and Brad gave me the victory. 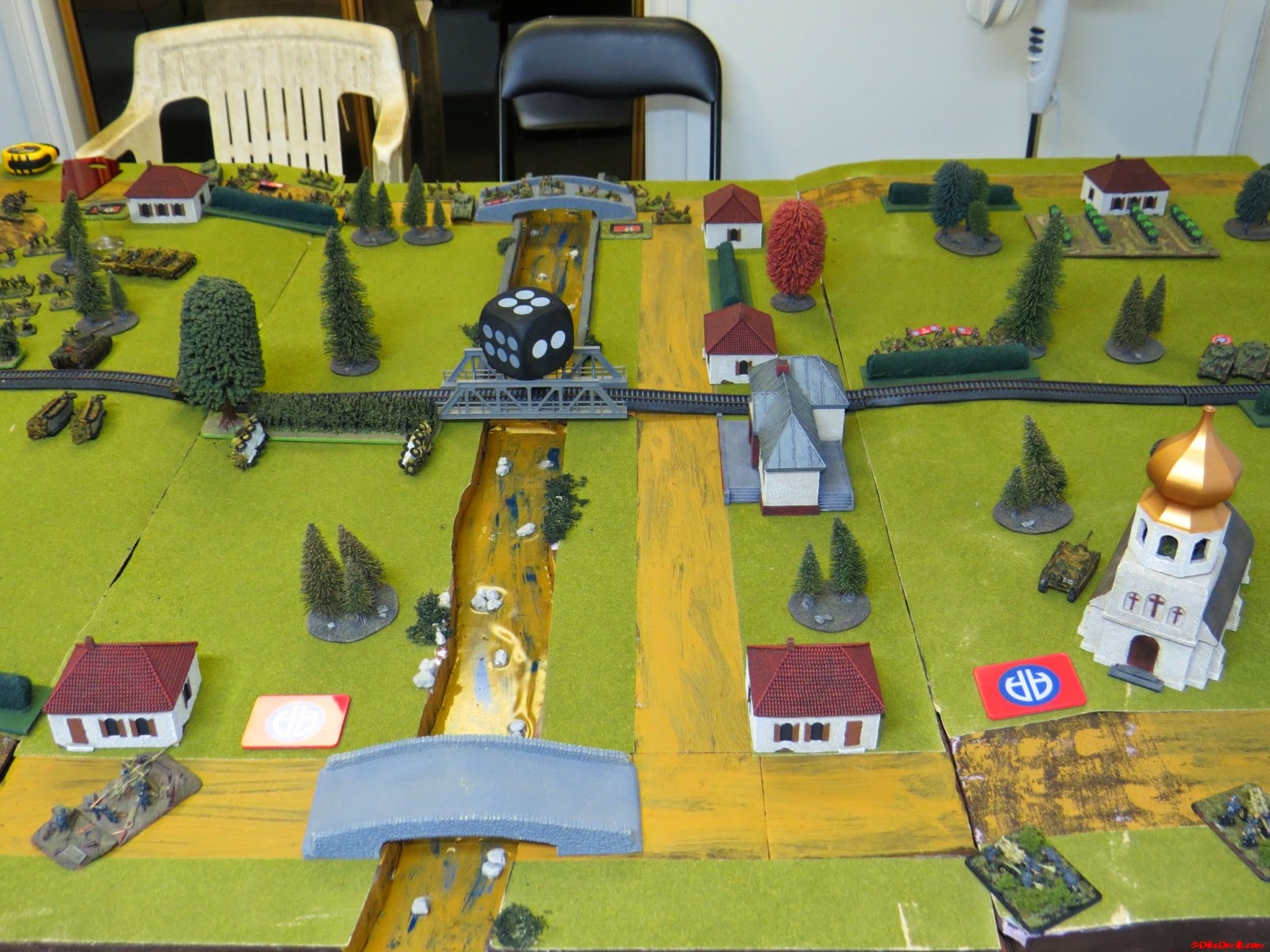 Just a look at the overall board, terrain and the objectives placed. This is on the German side of the battlefield. Brad had his objectives placed near the bridge and one slightly left of the small warehouse building at the upper left hand side in this picture. Both of my 82nd objectives are beside the bridge and the church, initially I mentioned coming straight up the road. I would have used the buildings for cover as I made my way to the church objective. 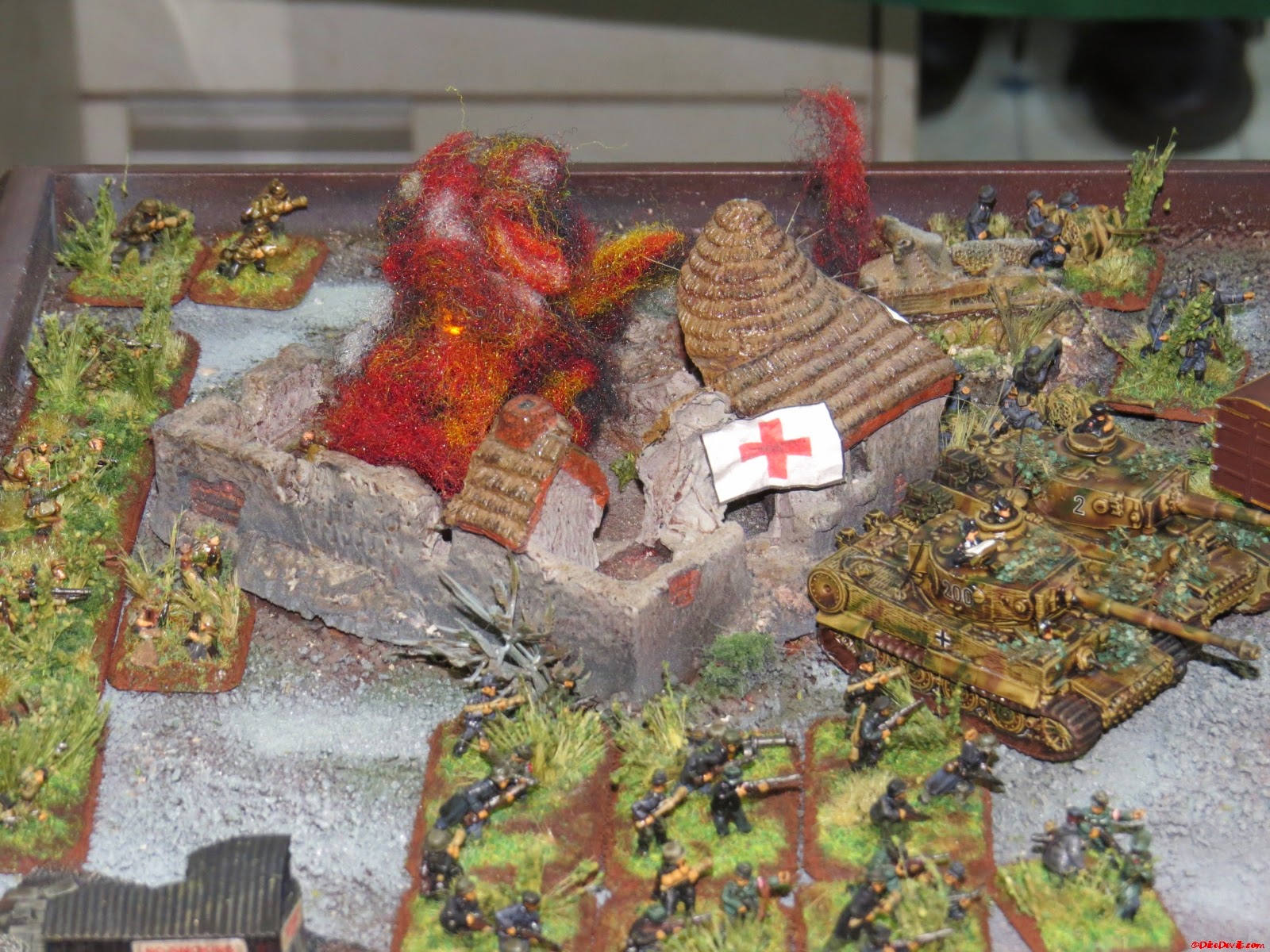 As with all tournaments in Petawawa, it was a great event. We had fewer numbers this time around, there were a lot of people out of the area and unable to attend. This is life on a tournament scene near an Army base, I've been on that side of the coin and had to miss an event or two due to other commitments. Regardless, the terrain, food, atmosphere at these events are excellent and we always look forward to going down to roll some dice.

Coming up in 2015, there should be a few more local events in the Ottawa area, as well as the EW-MW-LW regularly scheduled events in Petawawa. Once again, the Canadian Nationals will be held in Ottawa during the long weekend in August. More details to follow on everything that's happening in 2015 right here on our homepage. Don't forget to check out our podcast, if you haven't done so already. It's mostly Flames of War chat with some other stuff thrown in, video games, board games and more!
By Matty at November 30, 2014