Hello all, thought I'd drop in a quick AAR I had with fellow Dice Devil Diragi today as part of our day long Good Friday Hobby/painting/gaming/bad movie day at CA$H's place.

Since this is the first tier of our campaign we had 750 points to play with and we only had to have 1 of the 'mandatory' combat platoons in our armies. The next tier is when normal lists are required. I'm running my FSSF as I managed to make a list that will help me clear a tonne off my painting queue as this campaign draws on. Note, I am running these out of Dogs and Devils due to not having the new books yet!

FSSF Platoon + Bazooka and Flamethrower (that I forgot I had...)

We rolled Hold the line and I groaned as I'd only have 1 platoon for 3 turns (at least).

I chose the 90mm AA as they could hopefully snipe for a few turns before being blown to bits. 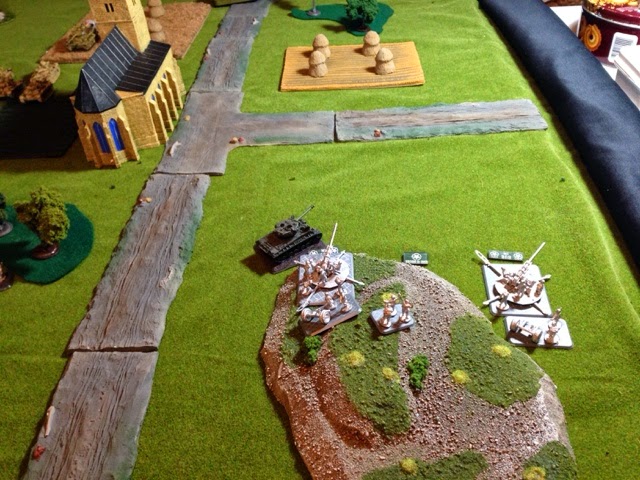 Diragi decided to ignore them and hide behind the church! 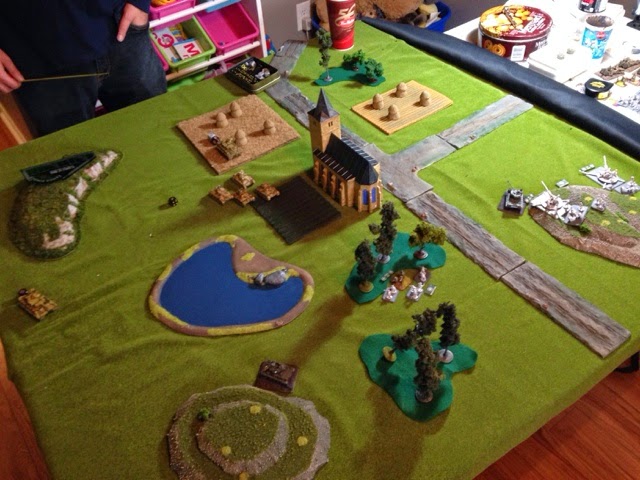 As you can see he used the church as cover to carefully move forward. All I had close to the one objective was my HQ + 2 bazookas...uh-oh! 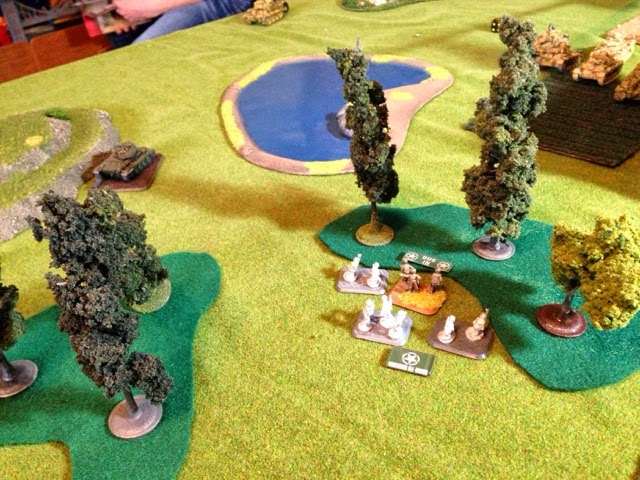 For the first turn or two not a lot happened outside of maneuvering to avoid being shot by my Heavy AA Guns. Finally Diragi pushed for the objective and I got a chance to shoot! 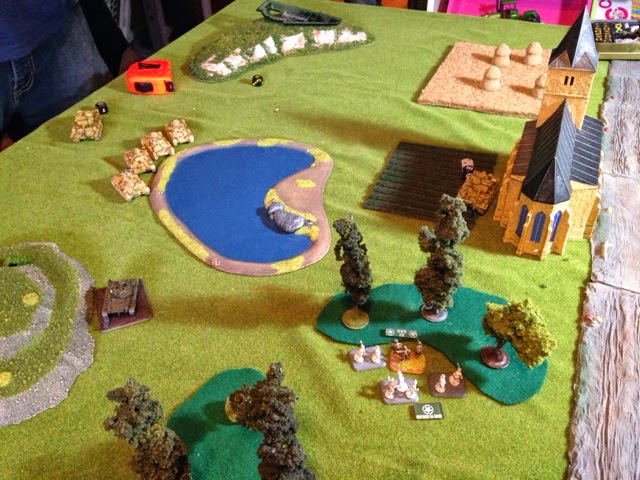 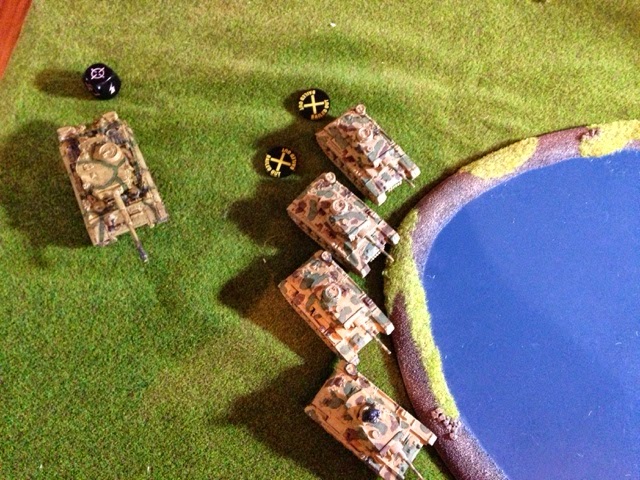 He managed to only get two bails despite my AT 13 hitting him twice at long ranges! Curses!

Now with the AA hidden behind woods Diragi makes a push onto the objective. I still don't get reserves (potentially) unt next turn...uh oh. 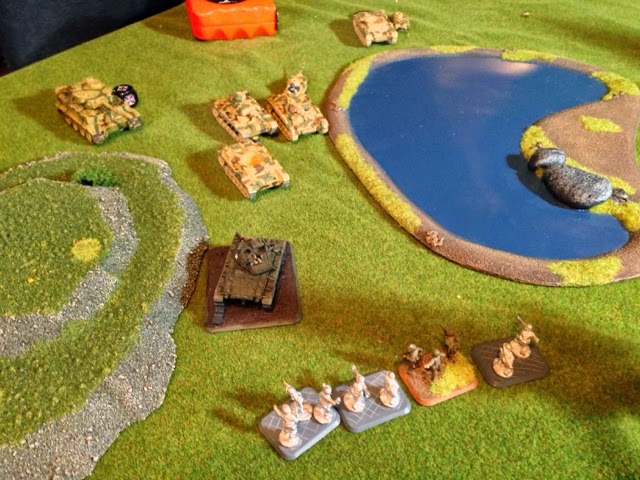 As you can see my reserves did not arrive and so my HQ had to jump in to stop the auto win. My AA sniped the one panzer that didn't get back in to his tank and I manage to kill the closest Panzer with a bazooka so now he wasn't contesting again...though my HQ was no longer snug in foxholes...and sitting in front of 2 panzer IIIs and 2 Tigers... 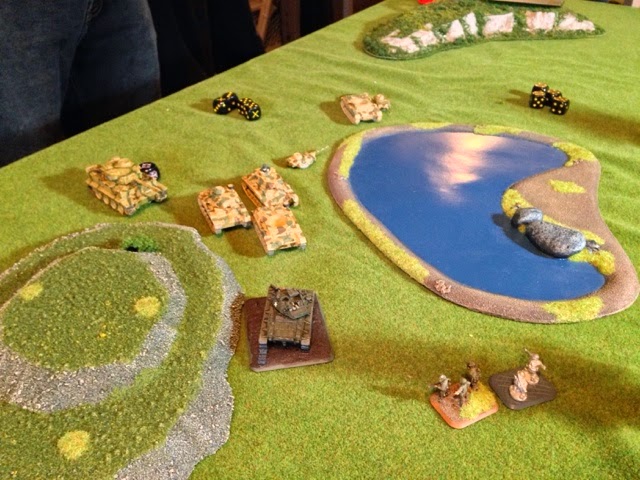 Surprisingly the HQ wasn't wiped out and passed a test to stick in the fight. I made it to turn 4 now and could roll for reserves again! 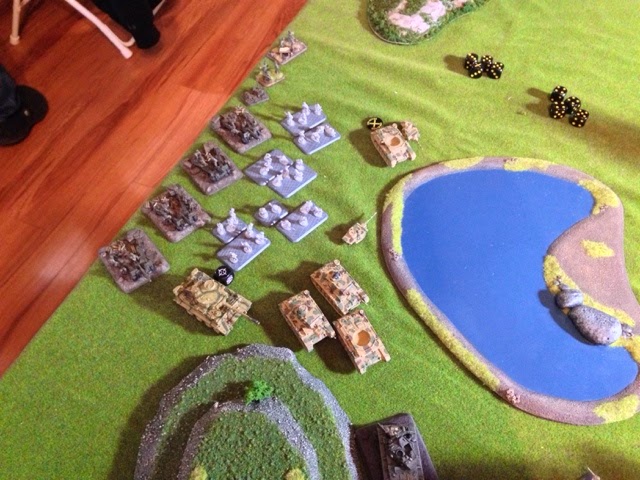 Hello Boys!! My FSSF platoon arrives as does my artillery, all in his rear, I have new life!

It's short lived though. I don't manage one kill or bail, lose half my FSSF platoon assaulting him and in return he wipes out all the Artillery guns and command, leaving a staff team that promptly runs away.

So...despite the potential heroic comeback, my army is literally back to my HQ and AA and the enemy is essentially unharmed and I'm making company tests each turn.

We call the game at this point, 6-1 for the Germans but I hope I can give them a little more sport at the 1000 point tier next week (and have a bunch more painted).

Key points for me:

• despite fancy rules, in assault FSSF are still trained infantry and get annihilated by defensive fire.
• mobile assets are really needed in an infantry company, especially facing an all Armoured list.
• Assembling the 90mm AA Guns is not a job I'd wish upon my worst enemy.

Cheers for now all and I'll be back soon with some painted (and magnetized) AA guns to show off!

American Armour Painting Tutorial should be up by the end of the long weekend!