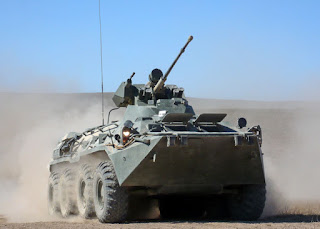 Well, I made a weird New Years Gaming Resolution, and that is to not buy a single model in 2013.  So just my luck that on Dec 27, 2012, my gigantic 15mm Modern Soviets army shows up!    A few guys and I decided that we should branch out into the Cold War what-ifs, and when deciding on scale, 15mm had a number of benefits, chiefly that we already had western european and desert terrain in this scale, and when I laid eyes on that pic WWPD Steve took of the NVA tanks, I was sold.    I decided to run generic Soviets, which can be used as Syrians, Egyptians, basically any Communist country from late sixties to the 2000's, so long as you don't rivet count, as BTR60/70/80 its really only the turret that differs, and the T-54-T90 pretty much look similar.   The actual models I got represent mid 80s Warsaw Pact stuff. 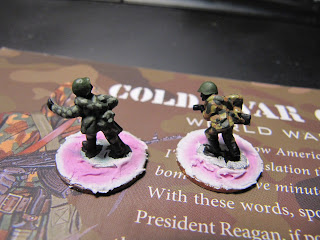 First test models, left is Red Dawn style Spetznaz, right is more generic 3 tone camo.  I picked the one on the right.  The spackle when wet is pink, white when dry, so you can tell these are "fresh" pics! 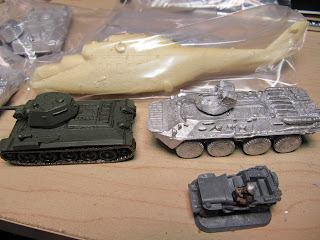 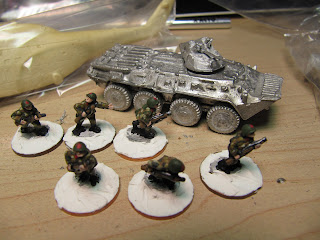 Battlefront WW2 russian test models in 3 tone, based on pennies, in front of their ride (QRF Miniatures' BTR-80A).   Force on Force is a very loose ruleset, where the individual guys can be based like this or in fire teams of 3 or 4 (BMP squads are 2 fireteams of 4, BTR squads 2 of 3 men each, 3 others man the BTR)     After seeing many folks using the Flames of War style bases, and even the FoF rules, individual model facing doesnt matter, you add up the fireteam firepower and roll dice, I think I will go with 4 man fireteams per base.   In my case, QRF miniatures sells a Motor Rifle Squad as Lead, PKM machinegunner, RPG7 AT guy, and 5 AK74 guys.

RKelly is doing Canadians, and QRF Miniatrures is the only way to get a few Cdn vehicles, while Mark is doing West Germans.   Yes, they kept WW2-sounding names, like Luchs PanzerSpah vehicles, Marders, but have moved up the feline tank name tree to Leopards!

Below is a little video I made just before Christmas (and before all this loot got here) of my test models.


For those that like to know these things, here is the full list of what I got (weighs almost 3 kilos)

BRDM scout car with Anti tank missiles x 4.  Not going to lie, its weird seeing your anti tank assets mounted on such a flimsy vehicle!  I am used to beefy ISU-122s.

And the Mi-24, probably the second objective, though some rulesets (Cold War Commander) allow them.  Again, badass looking vehicle and was a must-have.

So there we go, my football pool winnings blown on Soviets :)
By Matt Varnish at December 27, 2012