I know its a bit late but here is my tournament review from the splinters of locara tournament. I went 1-1-2 each game could have went either way. The tournament was well run and everything went very smoothly, All my games went very well and I had a blast. 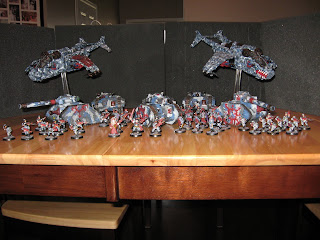 Game one: was against Just Dave as he became called (he doesn't have a game summit forum name). He played Tyranids his list had a hive tyrant, 2 zoanthropes, 2 large units of genestealers, a unit of hormagaunts, 2 units of termagaunts, 2 tervigons, 2 carnifex. I managed to pull down all his monstrous creatures and synapse creature but it was already to late, his genestealers were in my lines ripping apart the chimeras and I didn't have enough anti infantry guns to kill him as fast as he was killing me once he was in my line. It was a close battle the score was 9 - 6 so lots of bloodshed.

Game two: was against mysideofthemirror. He was playing space marines, with a very Dark Angels theme (obviously waiting for the new book to come out) It was nice to see an army that was shooting heavy, like dark angels should be. He had a librarian in terminator armour with a unit of 10 terminators, two 10 man tactical squads in rhinos, 2 devastator squads in razorbacks, 2 predators. There were 4 objectives and dawn of war deployment. By turn 5 it was a draw 1-1, turn 6 I was winning 2-1. But alas it went to turn 7 and i lost 1-0, my last infantry unit was wiped out by his terminators and i failed to kill his last infantry unit with my demolisher and 2 vanquishers. It was a close and well fought battle and it could have went either way with some luckier dice rolls.

Game three: I played against Missinglink, every time we play our games are close and there is always a pile of corpses and wrecked vehicles everywhere and this game was no different. He was playing blood ravens, I can't remember his list exactly, a couple of predators, a couple of land speeders, 2 tactical squads in rhinos, 2 dreadnoughts. By the end of the game there were corpses and vehicle wrecks scattered everywhere. I had left my demolisher, 2 vanquisher, my hq, a chimera with stormtroopers in it (which landed on a unit when they came in and he put them at the back corner of my deployment, though they managed to make make it half way across the table and blow up a dreadnought last turn) and a squad of 10 men that were sitting on my objective. He had left a 10 man squad sitting on his objective a few immobilized rhinos, a predator which he managed to flank my objective but wasn't able to make my 10 man unit run or get close enough to contest, he may have had one dreadnought left as well. Over all it was a great game and a blood bath as usual. The game ended in a draw.

Game four: I played Omega who played Blood Angels. He had a chaplain in a unit of assault marines with a sang priest, a librarian dreadnought, a unit of stern guard in rhino, a tactical squad in rhino, baal predator, and probably some more. The mission was victory points and pitched battle. I managed to pull off some lucky shots early on and the game ended at turn 5 which gave me a victory by about 160 points, he was unlucky that his main unit only came down on turn 3 so didn't get as many turns to crush my stuff as he had liked. We went on to play the last two turns as a what if game since we had the time. His assault unit went on to crush my army, turn 6 it was a marginal win for me only about 40 pts, and if it would have went to turn 7 he was winning by about 130-200 points. luckily it ended at turn 5.

Overall impressions of my army: Its a similar list to what I usually play, i wanted to go with russes instead of chimera chassis equivalent and IMO it paid off. Over the 4 games i lost 2 russes one in the first game vs nids and one in the last game from a librarian with blood lance. If they were Medusas I'm sure I would have lost them every game. The additions of the Valkyries helped a bit but looking back I should have taken Valkyries with rocket pods, I was very light on anti infantry and it hurt a lot. The stormtroopers were hit or miss, vs tyranids they managed to wound a tervigon a few times before being eaten. They killed a bunch of marines games two, they forced him to have to shoot at them for a turn. Game three they landed on a unit and ended up at the back corner of my table edge (his choice). Game four they managed to wipe out a 10 man tactical squad over a couple turns of shooting, I'm enjoying there ap3 weapons, i thought the str 3 would really hinder them but i managed to get some lucky rolls. Not sure if I would take them to another tournament but I definitely will use them in friendly games, I'm glad there finally painted. Other then that I was quite happy in how my army performed, the Vanquishers opened up many tanks and rhinos, much more then I thought they would only hitting 50% of the time on average. I definitely will stick to the vanquishers for a while.