This was my first miniature game. As I mentioned in my last post, Battletech holds a dear place in my hobby heart. I remember doing odd jobs when I was 12-13 to scrounge the money to buy the starter box:

Funny story about that. Despite being release in 1985 I first saw this back in 1988 when I was 12 and fell in love with the box art and the description of the game. When I finally had enough cash (I want to say it was $20?) the local store was sold out!! With no online shopping options for a 12 year old in 1988 I instead turned to the only other box they had: 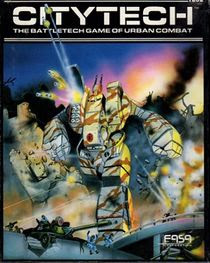 I still have Citytech to this day. But Kickstarter has changed it. In the past year Catalyst Game Labs has "re-released" Battletech and I joined in day 1 of the Kickstarter despite having not played the game in a long, long time. I received the Battletech Kickstarter just over a year ago (I know, grey plastic shame on me!) but decided to wait until the Clan Invasion (Wave 2) came out this year to open it all up and paint it. Here is what I accomplished:

I am awaiting Wave 2.5 which will basically see my forces double with the addition of all new mechs for both sides! Until then here are some sample pictures of how I painted them all up.

The "core" generic mechs for the Inner Sphere have been painted up as the 8th Lyran Regulars (House Steiner) with 2 lances painted up in Guard colors: 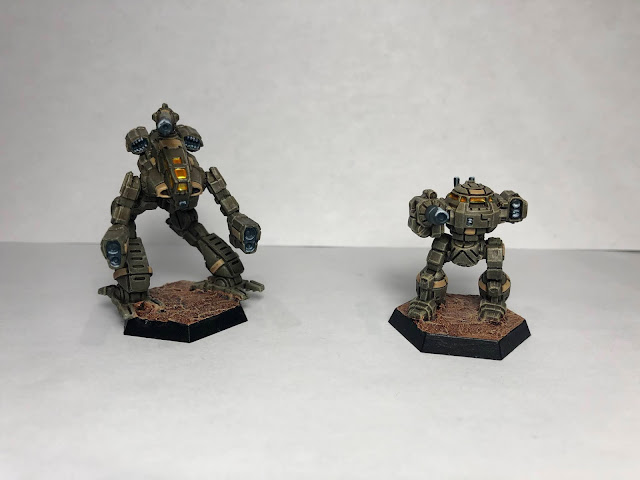 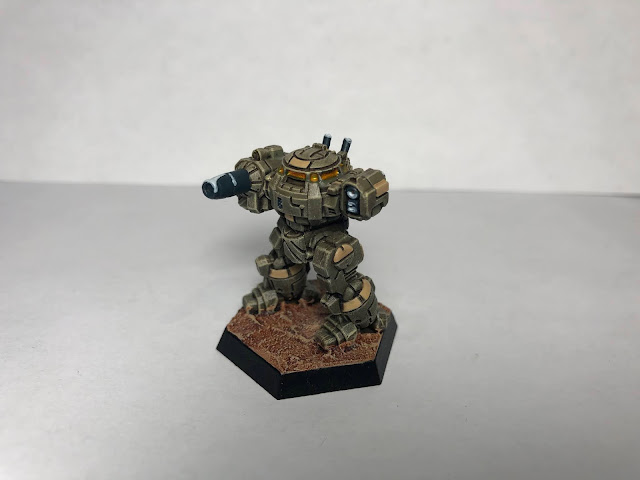 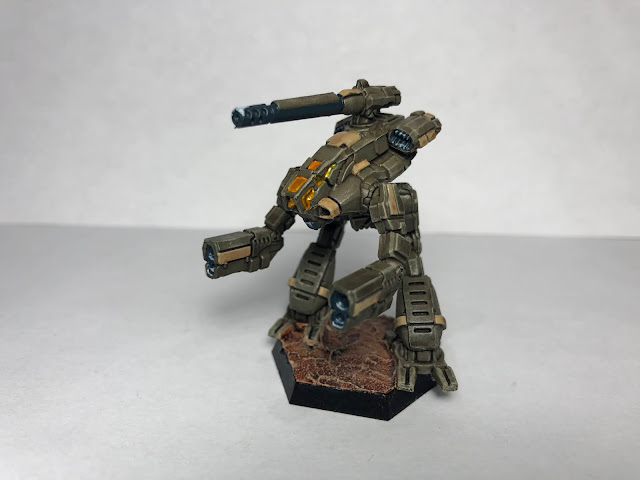 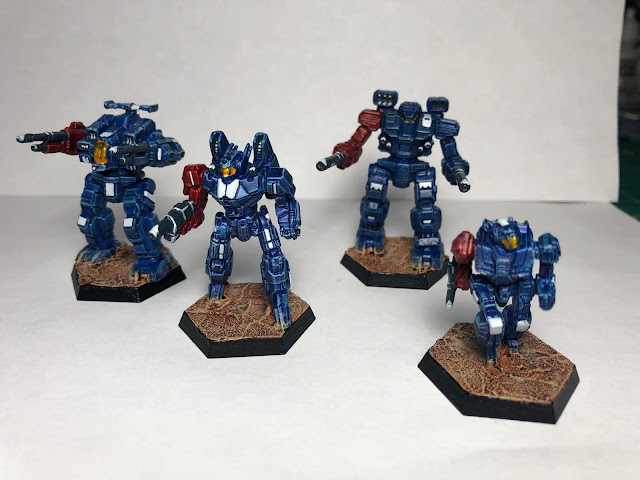 Lyran Donegal Guards Battle Lance
For the Clan side I went with my personal favorite clan - Clan Ghost Bear! 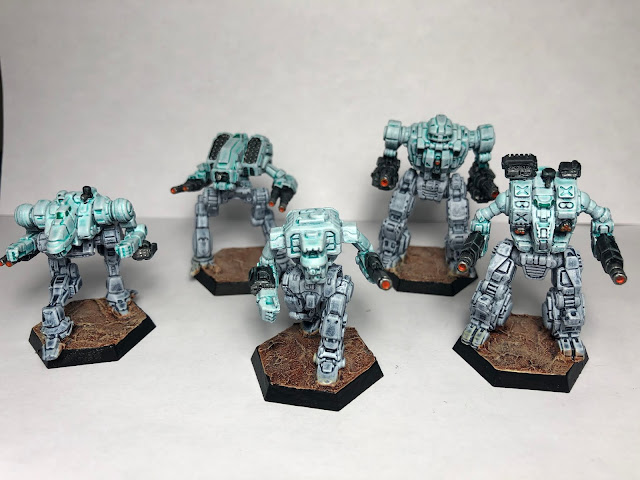 Clan Ghost Bear Heavy Striker Star
I planned to do some insignia work but found a spot online that sells scale decals for all the different units in the Battletech universe so I will be ordering those. Until then I feel this meets my "Play it painted" standard for a few games to reacquaint myself with the rules and system.
My eyes are also drawn to the Alpha Strike rules for Battletech as it plays in a more "modern" way with open movement and simplified management of your mechs. I will be trying it out for sure! The beauty is the game can be played either way and you don't have to pick one and stick with it - a great idea!
Now that all these mechs are painted I am looking at a massive heap of plastic sprues that are my Ogor Mawtribes army for AoS and I think that may be my next project. As its over 3000 points worth I feel that will qualify the Ogors as my #newyearnewarmy project. So I will start assembly now, in the hopes to start putting some paint to plastic over the Christmas holidays.
Stay tuned for some more Battletech distraction along with more Games Workshop and Star Wars Legion content!
Cheers,
Ca$h 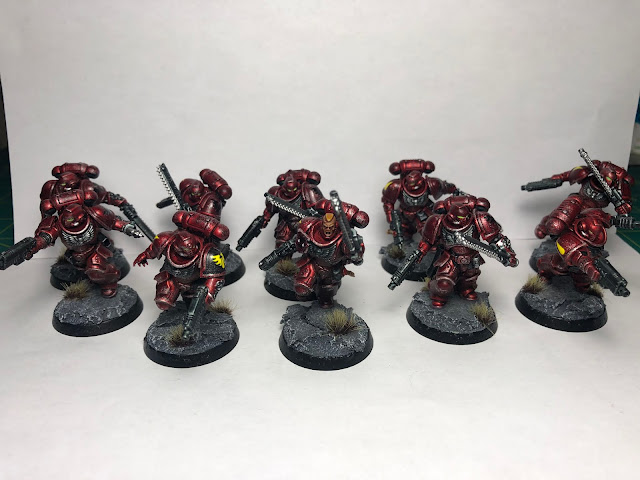 Click on after the break for pictures of all the characters, bikes and other units!
Click Here To Read More
By CA$H at November 30, 2020 No comments: 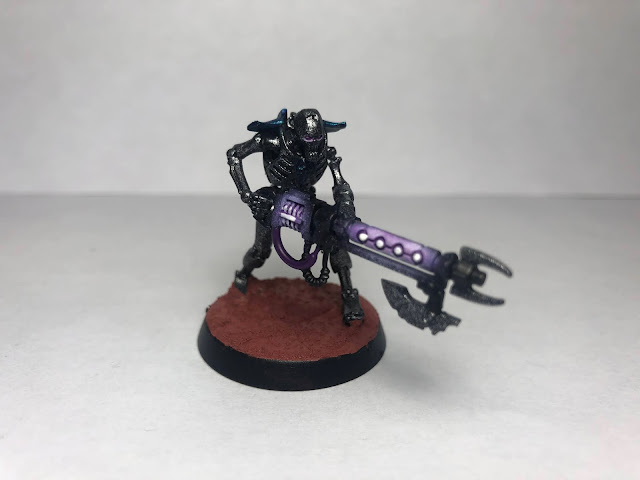 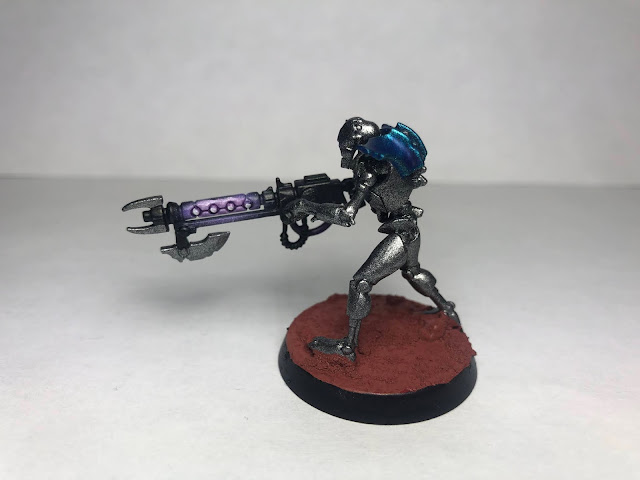 Click on after the break for more pictures of all the Necrons!
Click Here To Read More
By CA$H at November 12, 2020 No comments: 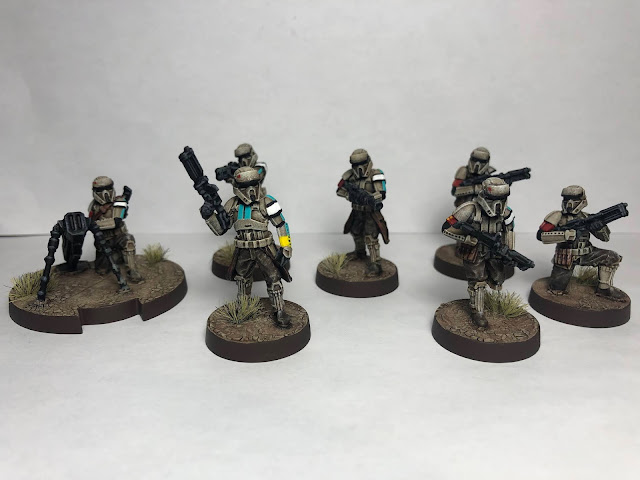 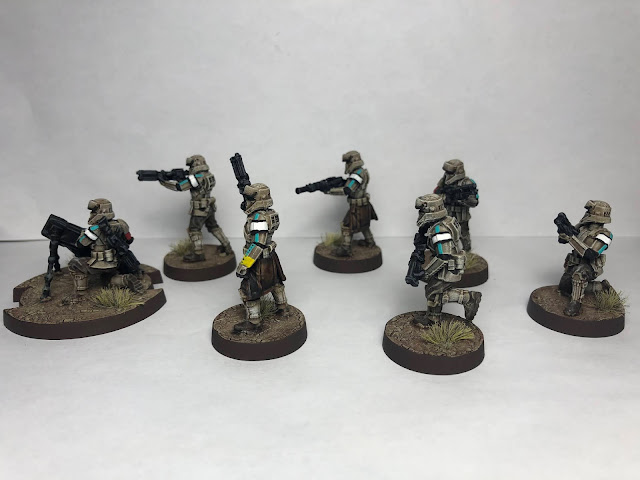 Click on after the break for pictures of the other unit and how they faired in their first battle last Friday!
Click Here To Read More
By CA$H at November 09, 2020 No comments:

In an effort to complete the models I already own, I have finally completed the AT-ST for my Star Wars Legion Imperial forces. I think I picked this up when it first released back in 2018? For $55 it was a steal of a kit and I am so happy to see it finally completed. Here are a couple pictures: 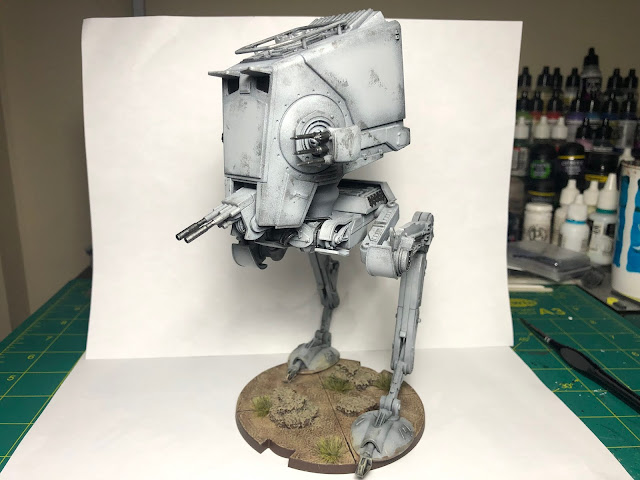 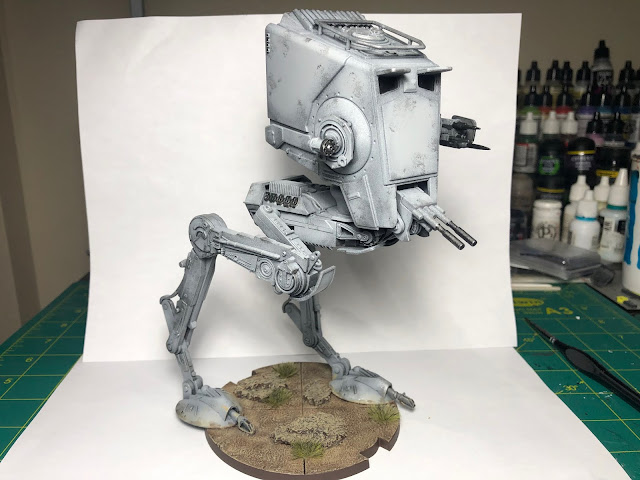 I tried to keep it simple. By that I mean when I went looking at pictures of the AT-ST from Return of the Jedi I noticed it was basically all grey - the guns, the hull, the hoses even. It was all very matt, dull and singularly toned. Attempting to recreate that definitely makes it look a little "bland" in miniature form but I feel it conveys the purely utilitarian approach the regular Imperial forces take. I can't wait to get it on the table!

With the AT-ST complete I have ordered the last remaining unit(s) I need for my Imperials - Shoretroopers. They have been out of stock for a long while, months I was told by my FLGS so I ordered a couple boxes off amazon. Until they arrive I have also started on the Necron half of the 40k Indomitus special release boxed set for 9th edition. My son loves the look of all the killer robots and is keen to learn how to play 40k with them.

The plan for now is to get that Necron force painted up and to start playing small skirmish games with him to re-learn the 40k game myself. The Necrons in the box total around a 1000 points so its a perfect size starter army for him - and me! I am still unsure what I will do with the Space Marine half. Being all new releases, I am tempted to start a whole new marine force, but I also kinda want to start something new and different for 40k 9th edition. I already have 2000+ points of Emperor's Children Chaos marines so a second marine army doesn't seem to be as exciting despite how amazing the new models are. We shall see what I decide but for now, Necrons are calling. Once I complete the Necrons I will probably swap back to the the two units of Shoretroopers just to get all the Legion stuff completed so stay tuned to see where my hobby journey this year takes me!

Of note, we are putting out live streams roughly once a week on the Dice Devils YouTube channel linked above so please go check it out and let us know how we are doing. We are improving our equipment and layouts for the games each week and really enjoying it. So far it is just Star Wars Legion but it will expand to include whatever I am playing - perhaps even small learning games with my son!?

I managed to finish up some more Star War Legion this past week or so. This is just a quick update with some pictures: 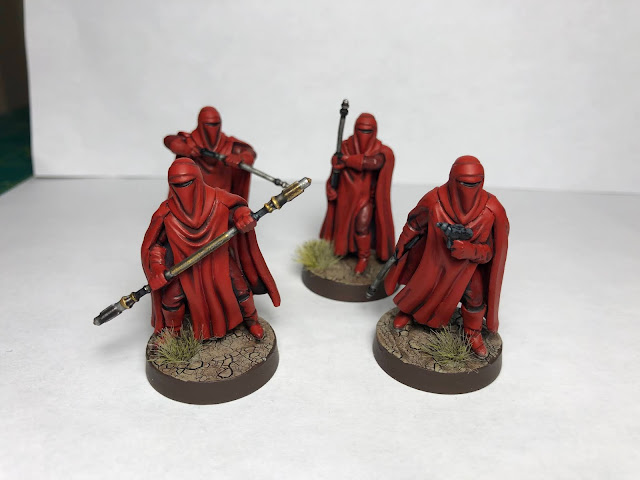 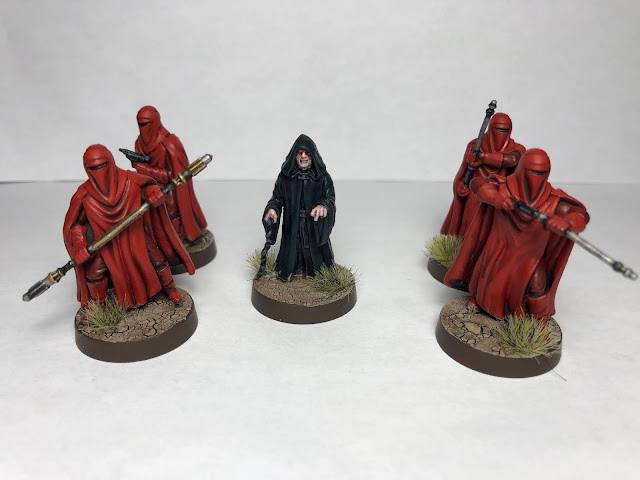 Palpatine and his entourage
Click on after the break for my Dewback rider, Bossk and Boba Fett miniatures!
Click Here To Read More
By CA$H at October 19, 2020 No comments:

It's been a busy October on the painting front, and especially related to all things Star Wars Legion. Matty and I have been getting games in a couple days a week and I have been painting up furiously to get new Imperial units on the table. I have added 3 new units and a smattering of characters to my force and I wanted to update you all with some pictures.

Before I start posting beauty shots, I also wanted to note that we have built a Dice Devils YouTube channel and are starting to try our hand at live streaming our games. This will improve over time as I get better cameras, set ups, overlays etc. so please bear with us while we learn. I have added a direct link to the menu bar across the top. For now the channel has a few of our recent Star Wars Legion games but the plan is to include any/all systems I play - mainly AoS (Age of Sigmar) and 40K along with Legion.

Here are the units I have completed in the past 2 weeks: 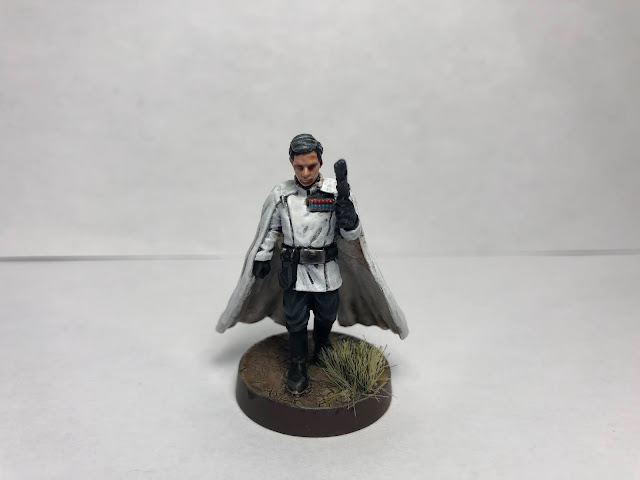 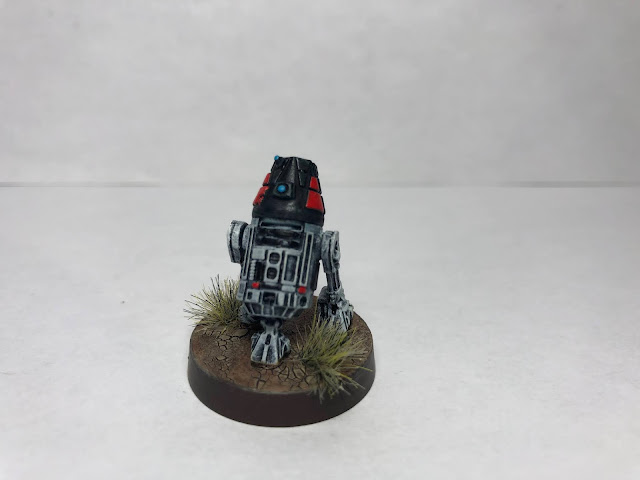 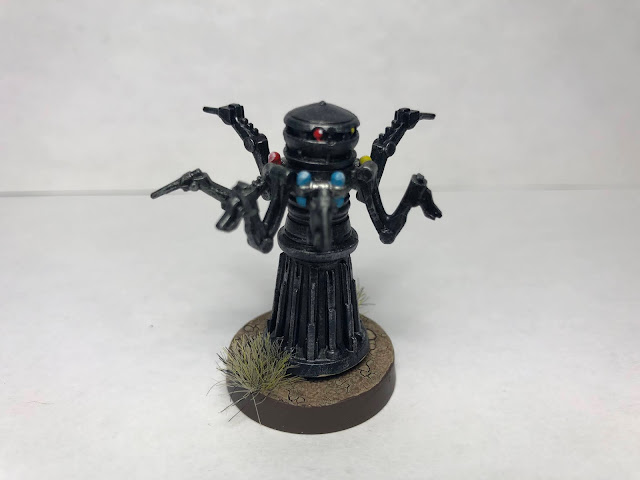 Medical Droid
More pictures after the break of the Death Troopers, Imperial Special Forces, etc!
Click Here To Read More
By CA$H at October 13, 2020 No comments: