“The Iranian company commander had ordered his tanks not to fire until instructed to do so. The forty-odd M-60A1 and Centurion tanks that made up the composite battalion was the last major force that stood between godless Communists and the holy city of Qom…Once the Iranian tanks of the battalion were gone, there would be no more. Winning or losing, however, did not matter to the company commander… His only regret was that they were fighting the Lesser Satan. How much better it would have been were it Americans who were about to die….” Sword Point by Harold Coyle. 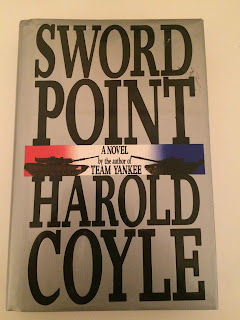 When Team Yankee the game was first came out, Battlefront’s Phil Yates conducted an interview with Harold Coyle, the author of the 1987 novel Team Yankee upon which the game was based. Perhaps some people were not familiar with Coyle and his writing, but for people of my “vintage”, books like Team Yankee, Sir John Hackett’s The Third World War, Ralph Peter’ Red Army, Steven Zaloga’s Red Thrust and other novels of this genre were stock reading. Indeed, as a serving soldier, First Clash, Kenneth Macksey's fictional depiction of 4th Canadian Mechanized Brigade's role in a future battle with the Soviets in in Western Europe was required reading.  But some may not be aware that Team Yankee was not Coyle’s only book centered on a future war scenario. With the pending release of Battlefronts Oil Wars for Team Yankee, I went back and re-read Coyle’s second book, Sword Point - a great book to stimulate your imagination for some epic battles involving the Iranians, Soviets and American forces. 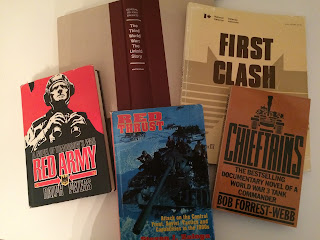 There is a great range of fictional novels to motivate a Team Yankee gamer.

Published in 1988, Sword Point is set centered around a Soviet invasion of Iran in the late 1980s. Soviet concerns over the spread of Islamic fundamentalism, and the historic Russian ambition to establish a warm water port, push the Soviets to launch an invasion of Revolutionary Iran along multiple fronts. The United States, looking to stem any advancement of Soviet influence and control in the area, launch an ‘intervention’ of their own from the south. The radical Iranian regime is happy to fight both and hopes in the confusion to pit the two invaders against each other – it doesn’t take long for them to succeed.  But when the major powers discover that the Iranians are building a nuclear device, the game changes and the Soviets and Americans must work together.

The book has a good pace and alternates between tactical action at the company/battalion level and the larger operational/strategic context in which the battles unfold. With his background as a serving tank company commander in the United States Army, Coyle’s description of the engagements between Iranian, Soviet and American forces is detailed and authentic – you can almost smell the cordite by times.  So, if you are looking for a little motivation to get into Oil Wars, and you can find a copy, I recommend having a read of Sword Point. And  now off to paint Iranian Chieftains!
By Brummbär at April 11, 2019