On 31 March, Kampfgruppe Kingston hosted what we hope will become our annual Spring Offensive Tournament at Kingston Game Nexus. We started out looking to host 14 players, but in the end, expanded to 16 in order to get everyone who wanted to play into the tournament. We were fortunate enough to draw players from Ottawa, Laval and St Hubert with an even split of eight local players and eight from out of town. 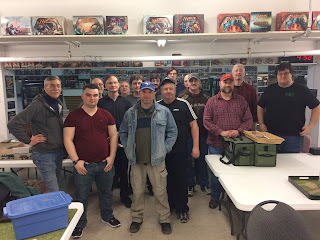 The Generals of Spring Offensive 2019


To our pleasant surprise there was a fairly broad range of armies entered: seven German, four Soviet, two British, two American and one Italian.  Of these two were recce formations, four infantry, four armour and six combined arms (running both an armour and infantry formation). 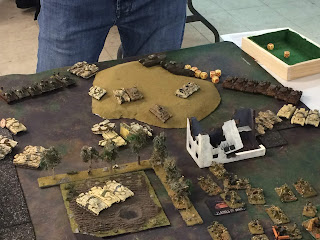 Combined Arms Soviets clash with a horde of Crusaders

Timings were tight but we managed to get three rounds in as scheduled before the end of the day. So that we had a good run at the rules we used Breakthrough, Dust Up and Bridgehead from the more missions. This allowed players to experience a host of unique rules such as minefields, meeting engagement, delayed reserves, etc. 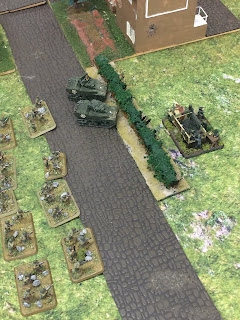 Ross' Armoured Infantry close in on the Objective

Top honors of the day went to Ross Bradley of Kingston with his US armoured infantry and tank destroyers winning both best painted and best general. Second place went to Christian Auclair from Laval with his Italian armour list. Third place was a tie between the McAdoo brothers Matt and Sam running their German armour and Soviet combined arms formations respectively. As always, Mike at Nexus gave us fantastic support and  fifty percent of those attending left with some kind of prize. 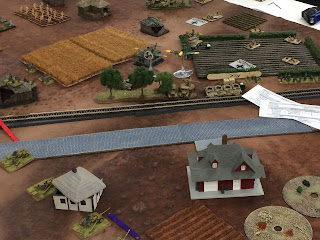 Kampfgruppe Kingston is looking to run our next tournament around the end of June. It is still undecided as to whether it will be another FOW MW event or possibly a Team Yankee tournament with the arrival of Oil Wars imminent.  Whatever it is, watch the Events announcements on the Dice Devils Forum for the dates and format.
By Brummbär at April 04, 2019