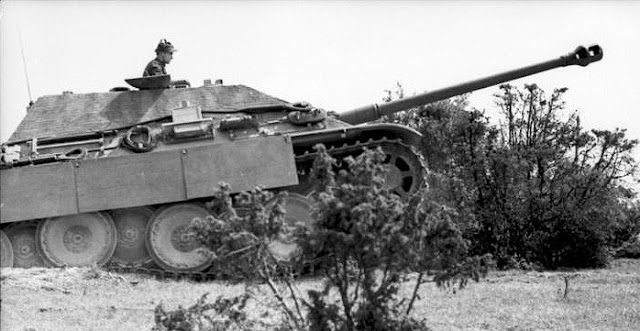 For my 91st After Action Report all-time, lets do a Late-War game, vs Matt 1420 point tune-up for an upcoming tournament in Kingston.  A bunch of them came up to Petawawa and to Cdn Nationals, so we may as well go down to their first tourney.  1420 points, Pincer attack.  Pics, then Video below.

My list is from Remagen, the 654th Schwere Panzerjager Abteilung (Heavy Tankhunter Squadron) and had 1 command J-Panther, a platoon of 3 J-Panthers, 2 King Tigers of the 510th sPz (so no tiger skills, unreliable, overloaded, reluctant trained), 3 neb tubes (Rel Trained) and a Rel Conscript Volksturm platoon.  I deployed the command Jagd and the Volksturm (see below pic) and the Jagd platoon was in ambush vs 8 Panthers.  I get 'always defend' with this list. 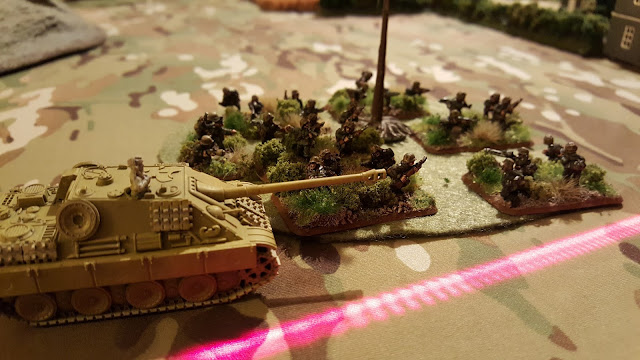 Matt was using his laser to make sure his panthers were out of LOS of my C/O tank. 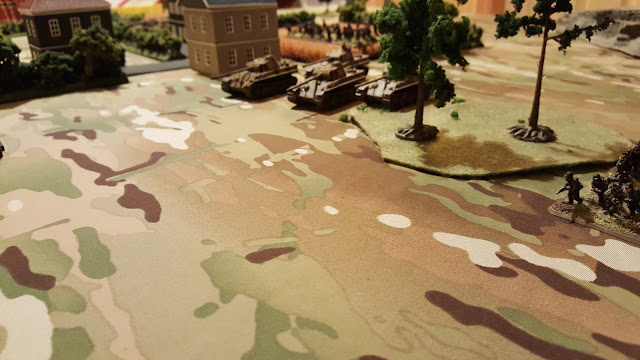 He moves up his platoon, careful to not be shot at by my C/O tank... infantry moves up as well (double-timed, trying to entice me to MG them and leave his tanks alone perhaps?) 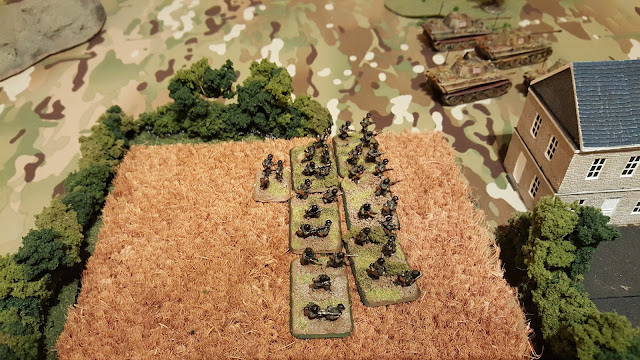 His other infantry uses backyards and buildings and alleyways to advance on my objectives. 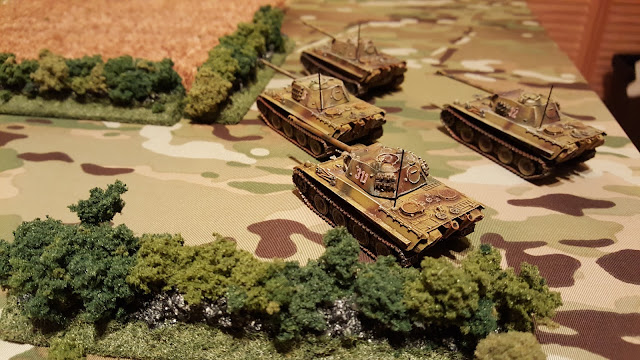 His 2IC tank and 2nd Panther platoon advance up the opposite flank (where my reserves will not be coming in on.  Updated Pincer rules from the FAQ mean I had to pick after he deployed.) 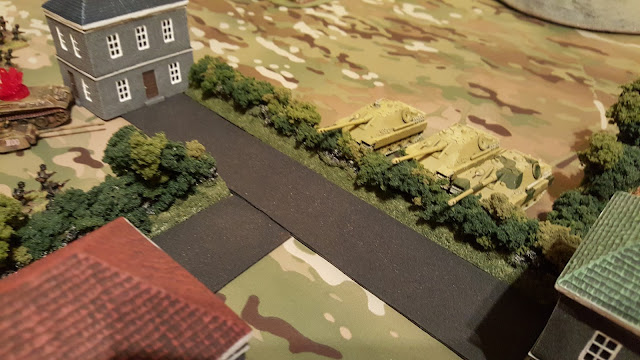 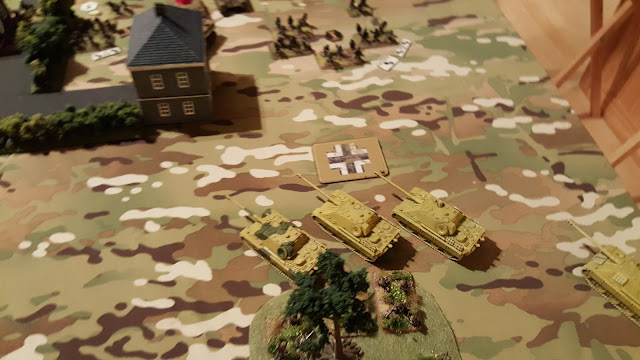 Later, my Jagdpanthers were able to back off and protect the near objective.  C/O tank hangs back.  "In the rear, with the gear" 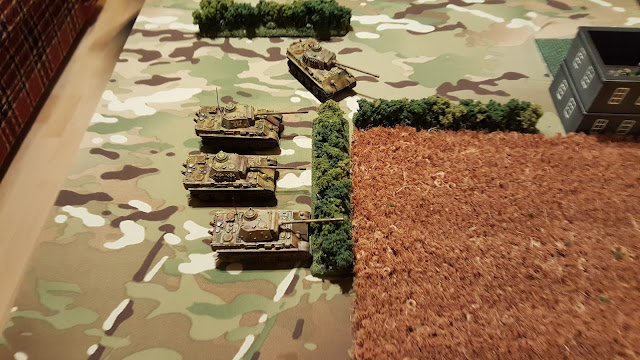 Matt uses the hedge to shoot back at my Jagd's 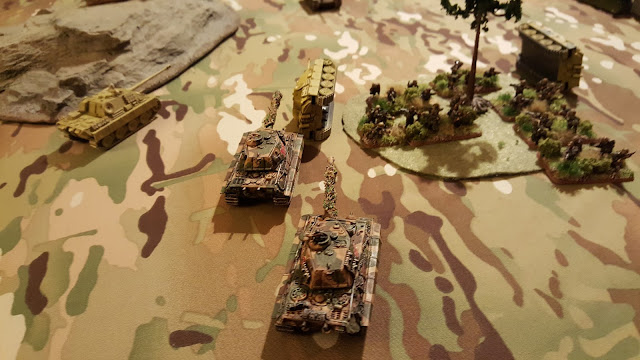 Losing my Jagds (Reluctant Veteran, so a platoon morale is deadly) but my Rel. Trained KTs move up and start icing his panthers at range.. 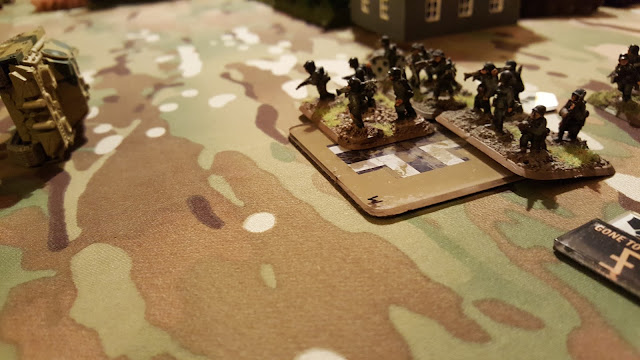 Game would end with his infantry on my objective, however the Volksturm were within contesting range.  There was a crazy twist-ending to the game.. but you'll have to check the video out below.


Also, as I am usually loathe to field unpainted models, I have already begun painting them in earnest... check the pics below.. 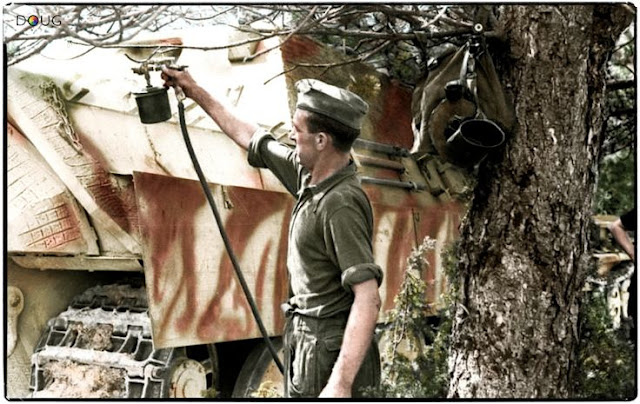 I found a colorized pic of a soldier spraying on some camo on a Jagd-panther.  "Fritz, where is your safety googles and mask?"    I went with ambush-dot camo, because I am a masochist apparently.. 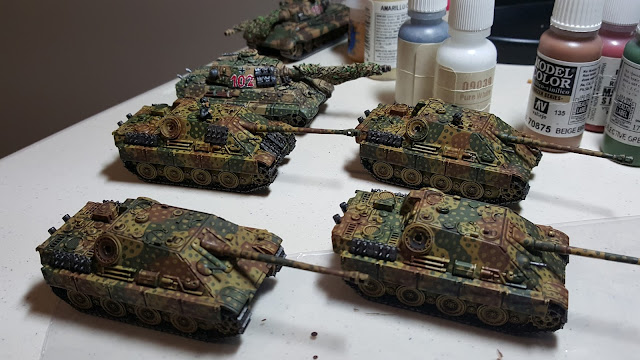 Just been inked.. need weathering drybrushing, markings and tool detail.  I also added dots to the already-finished KT in the background there.  I think they look great this way..

I have tweaked my list somewhat.. the Volksturm do NOT count as a platoon for reserves, so my original list at 4 platoons meant I really counted 3, so I HAD to keep 2 off board.   Now I have re-arranged my list to have 5 platoons, one of which is volksturm (so really 4).  Thus in a reserves scenario, I could keep nebs and 1 Jagdpanther (platoon of one) off-board and deploy 2 command Jagds, a platoon of 1 Jagd, and the two King Tigers.  And the mandatory Volksturm.. naturlich.