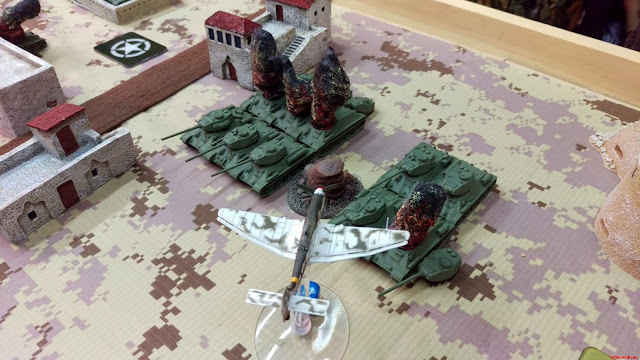 There's nothing like blowing up Russian tanks on a weekend. This past Sunday, we had a great but quick game of Flames of War. We rolled up 'Hasty Attack', and taking the opportunity to teach a new player the ropes, Patrick and I took my Schwere Panzerjagerkompanie list from 'Fortress Italy' and battled it out against 30 Soviet tanks!! 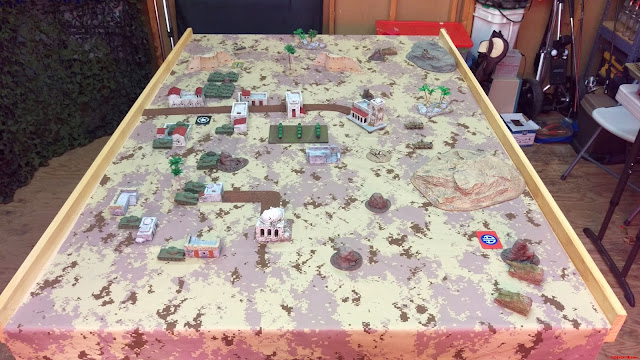 Objectives placed and the first few platoons on both sides were chosen. Since the Germans had 5 platoons, only 2 could be placed on the board. For the most part, I let Pat run loose with my list. Only really working the air support and Kevin and myself giving him tips on how best to employ different units.

Schwere Panzerjagerkompanie (Fortress Italy)
The Idea here was to have a small number of units and a little bit of everything but Infantry in order to better teach Pat a few of the rules while playing a game. Kevin's list looked like this.

It was a great list to see, as it is something I have been thinking about putting together at some point. The sheer number of tanks can not be underestimated, you have to deal with one platoon at a time and concentrate on either killing them all, or forcing them to test so they leave the battlefield. 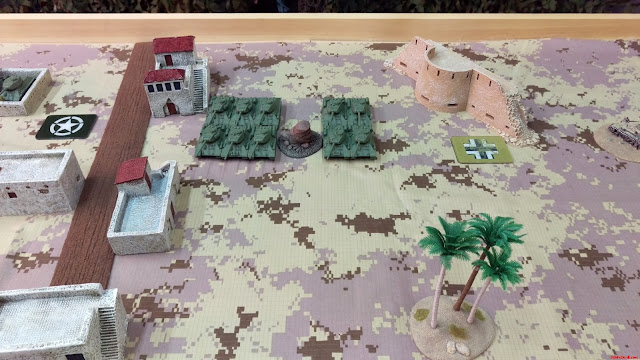 Sighting this platoon wasn't too much of an issue and once there were a few tanks destroyed, it was easier to force them to test before they could become effective. 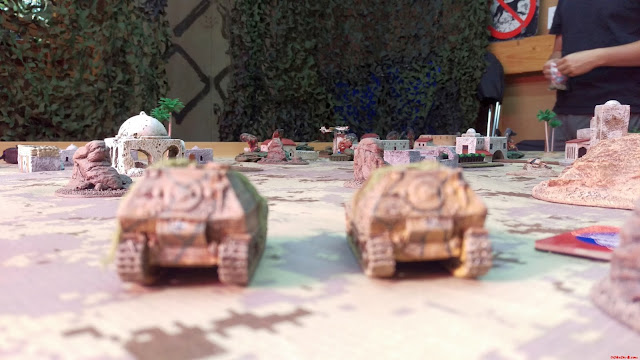 While the air was going to work on one side of the board, the two Elefant platoon was watching the objective and firing from range, the 40" range on this tank has to be used in order to effectively take out enemy tanks. It's also paramount you try and keep enemy tanks and anti-armor assets from being able to get side shots. The 8" Slow Tank movement of this beast has to be taken into account if you are going to use them properly. AT 16 Front Armor 15! 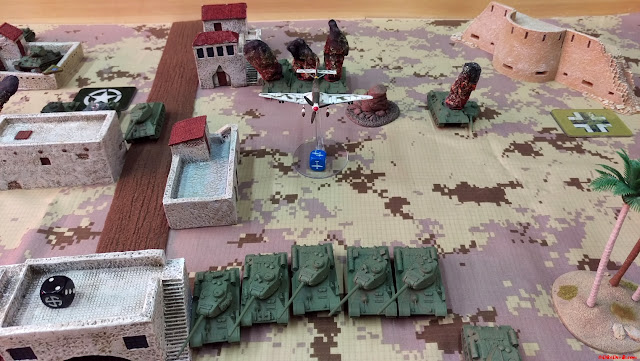 After Kevin got some reserves on the table, the air continues to punish the Soviets. The previous turn, the platoon to the aft of the Stuka in this photo were decimated and ran from the board when they failed their platoon morale. Eventually, this platoon would meet the same fate. 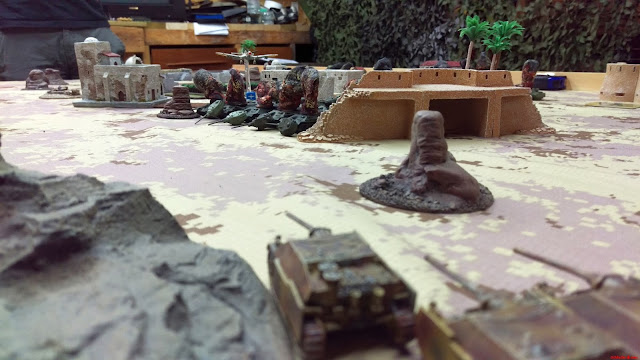 A mix of airpower and long distance shooting from the Germans finish off the second T-34 Platoon. Here, Pat/My Jagdpanzer IV platoon fire into the oncoming Russians in support of protecting the center of the table. We had to move this platoon away from the incoming Stuka so we didn't breach the 16" wave off distance. 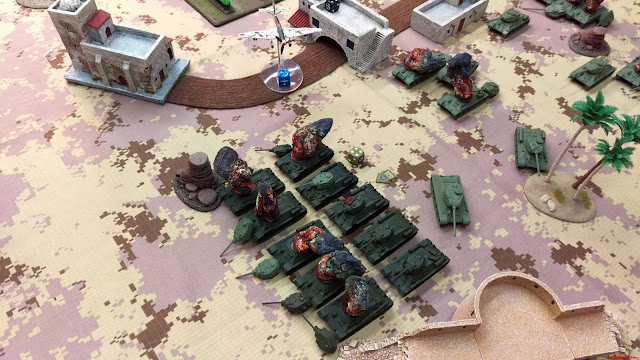 So many tanks on fire, 1+ firepower tests were easier when Kevin failed to roll antyhing but 1's and 2's on his armor saves. 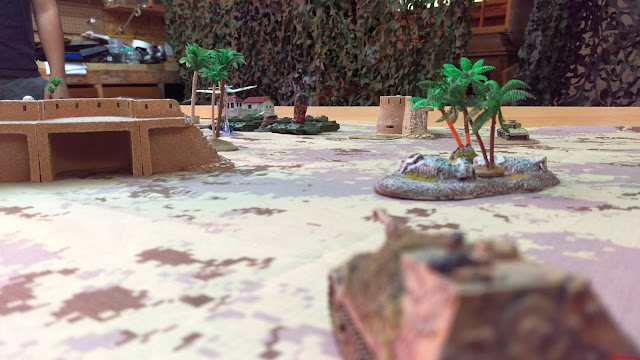 Much too late to be effective, the single Elefant looks on as air continues to control the Soviet advance. This is the extreme right hand side of the board edge and the objective lies just in front of the Italian Fort on the far side of the table. Turns out, Pat wouldn't have to move much more before the end of the game. 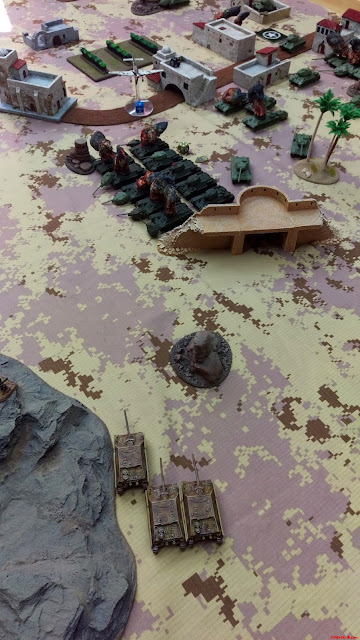 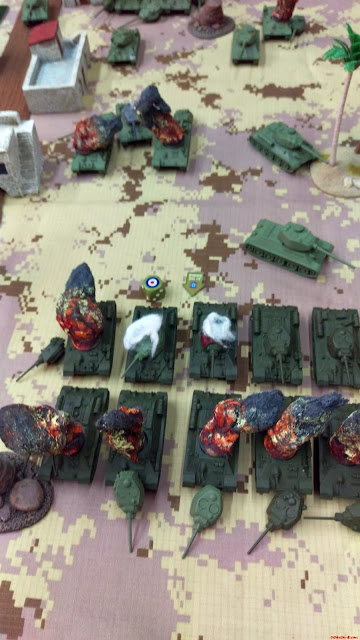 As the Red Army tries to regroup by bringing the last of the T-34's over to the fight, it was too late. 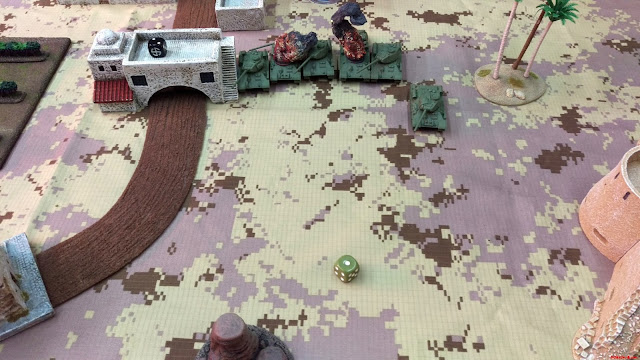 Once the smoke had cleared and most of Kevin's tanks had either been destroyed or routed, the failed company check ended the game. 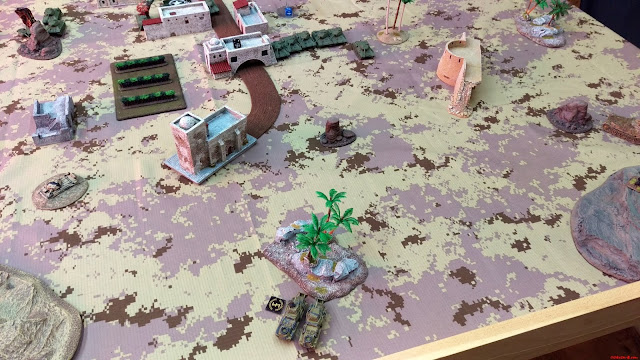 During the game, even the recon managed to stay out of the fight as soviets forced them to push away behind cover. These units were little more than a distraction and did not end up capturing or even being close to an enemy objectives. With the game over, we continued to go over the lists and talk about the upcoming 'Tanksgiving' tournament being held in Petawawa on the 10th of October. Check out the Events page for more info.
By Matty at October 01, 2015