Last night saw Chris and I run our first Dropzone Commander game! The game is produced by Hawk Wargames (http://www.hawkwargames.com/ ) and it is a 10mm Sci Fi game of fast moving dropships and building to building battles. We thoroughly enjoyed the rule set. It was fast playing, simple to follow and the alternating activations of Battlegroups (units) kept each of us in the game the whole time.

I played the basic starter force of UCM (United Colonies of Mankind) which came in the stellar starter set : 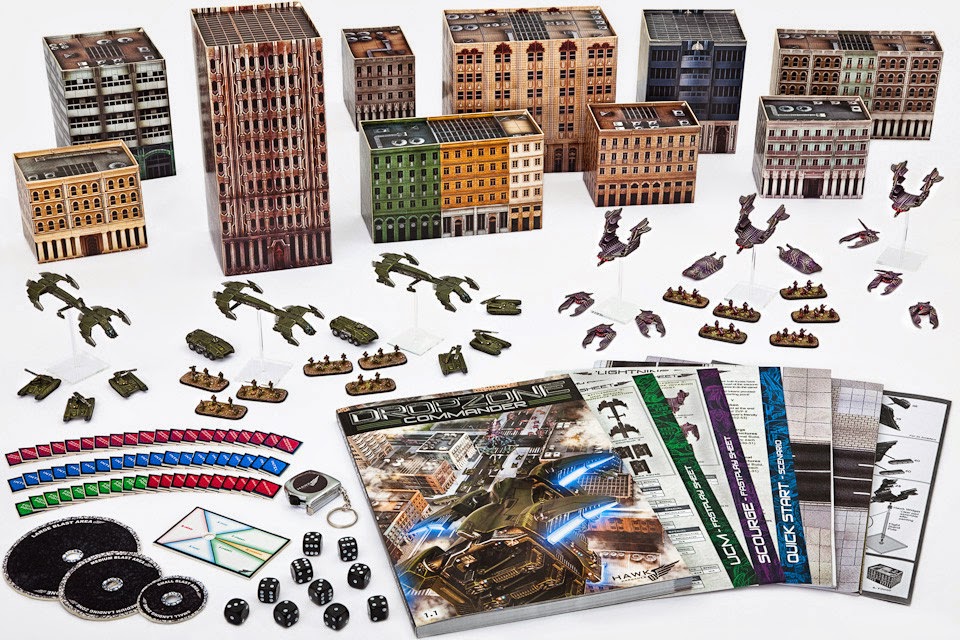 Chris had picked up the PHR (Post Human Republic) starter with consisted of some very cool cybernetics enhanced fighters with mech style walkers in support : 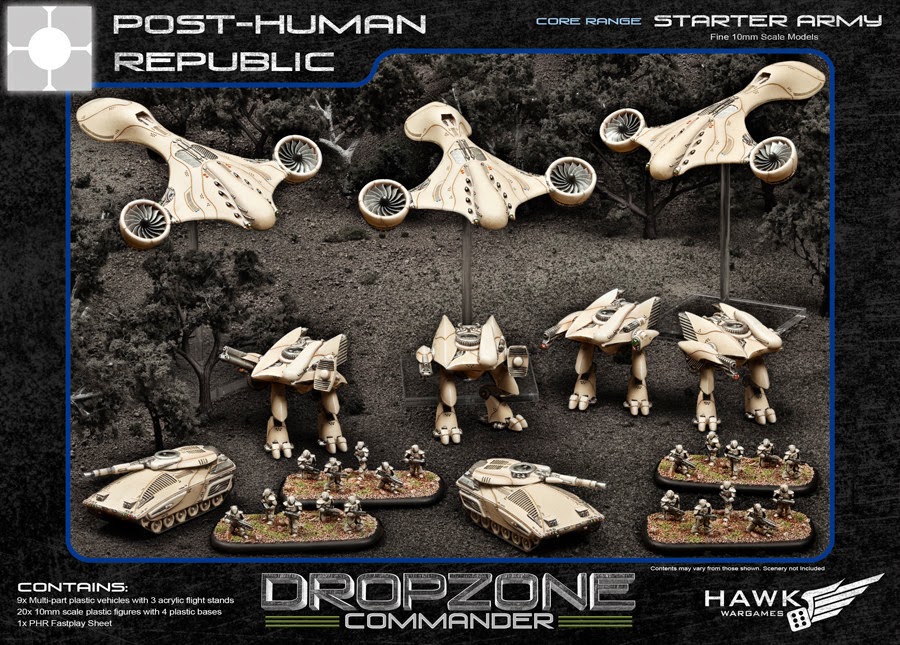 We decided, as complete n00bs to the system, to start out with the begining scenario recommended by the book : 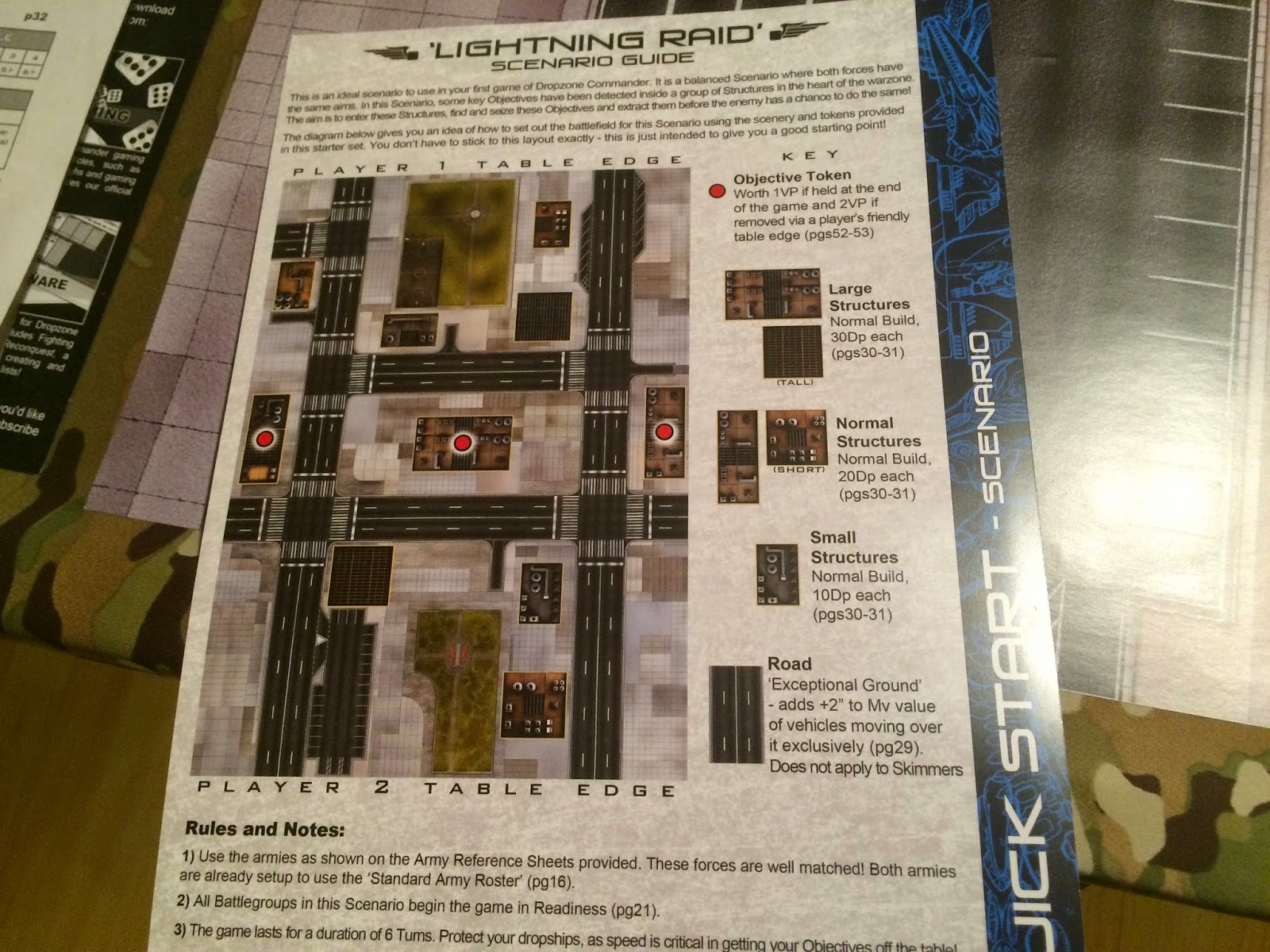 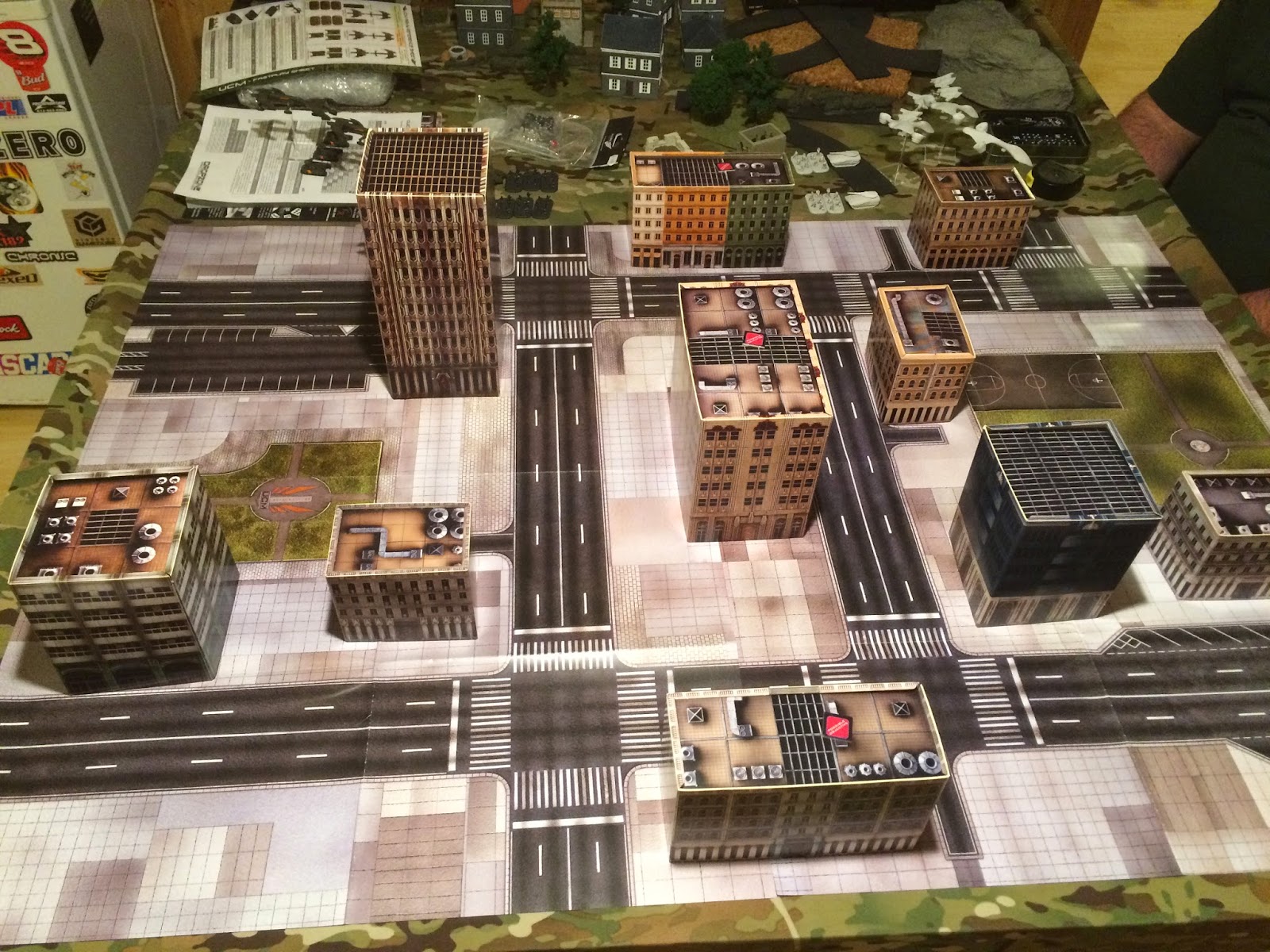 The Mission : "Lightning Raid"
Basically, 3 objectives, 1 Victory point to control it, 2 VP if you get is off your board edge. Here is the board. 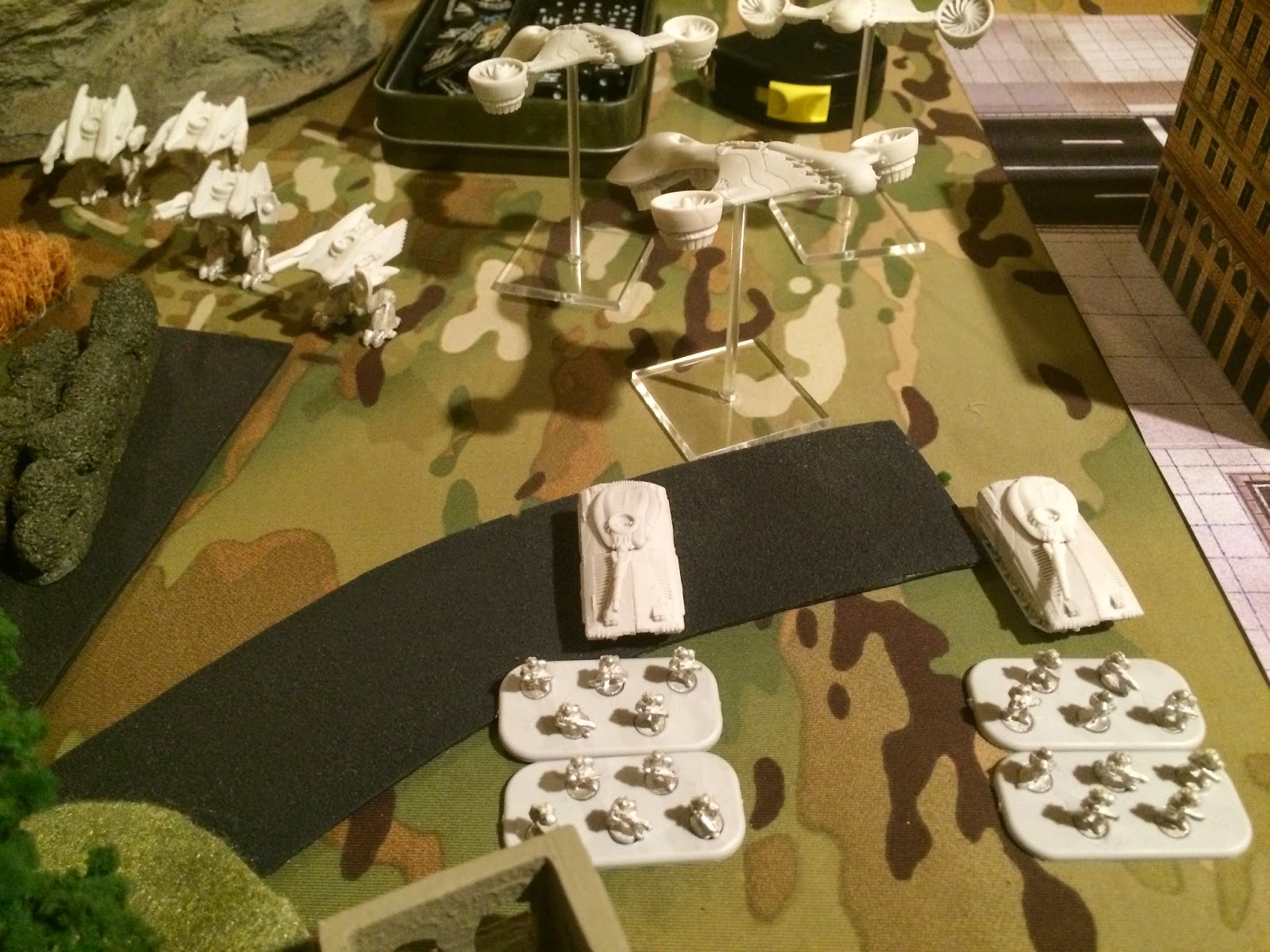 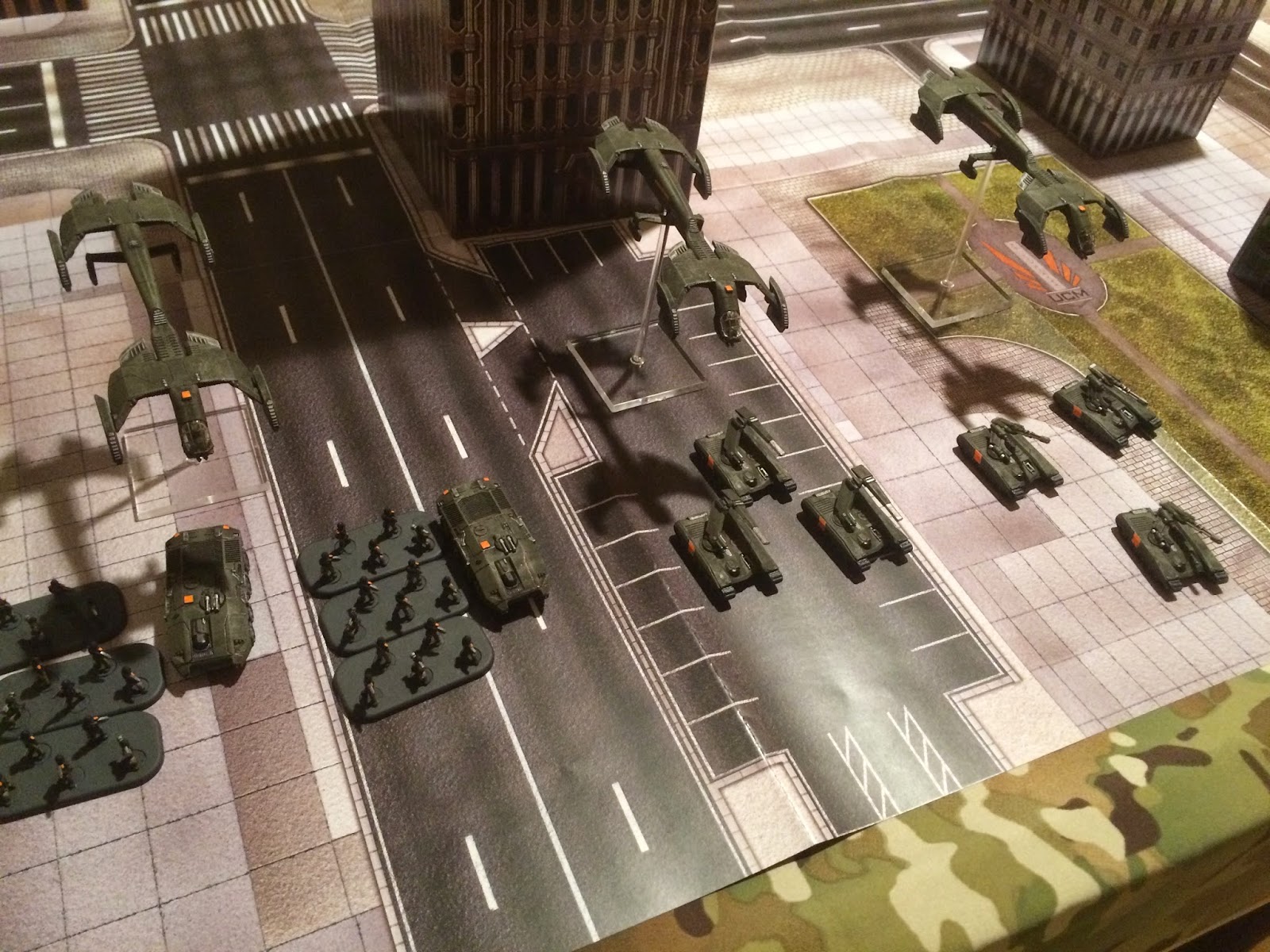 My starter set of UCM. 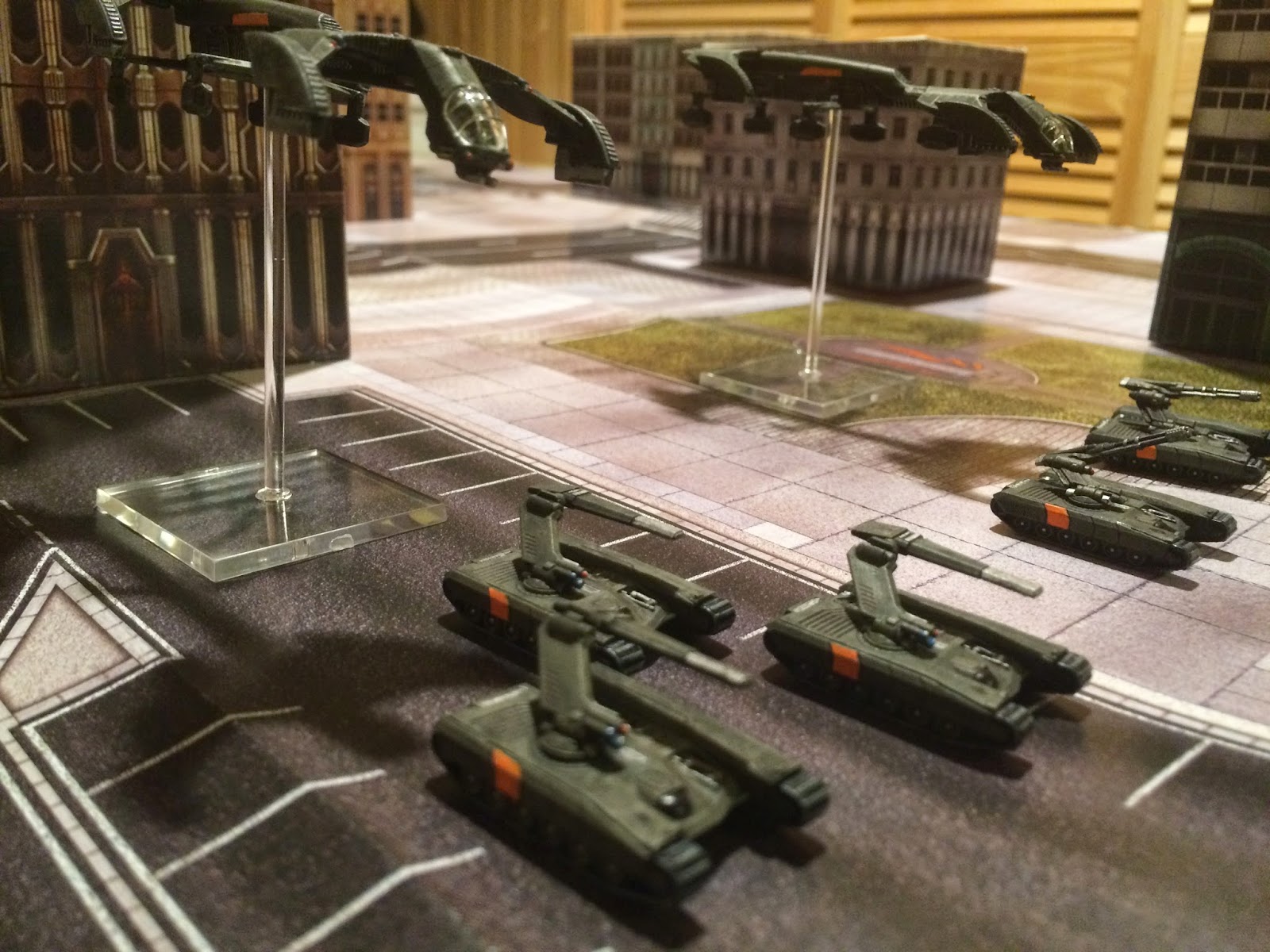 Up close with UCM. 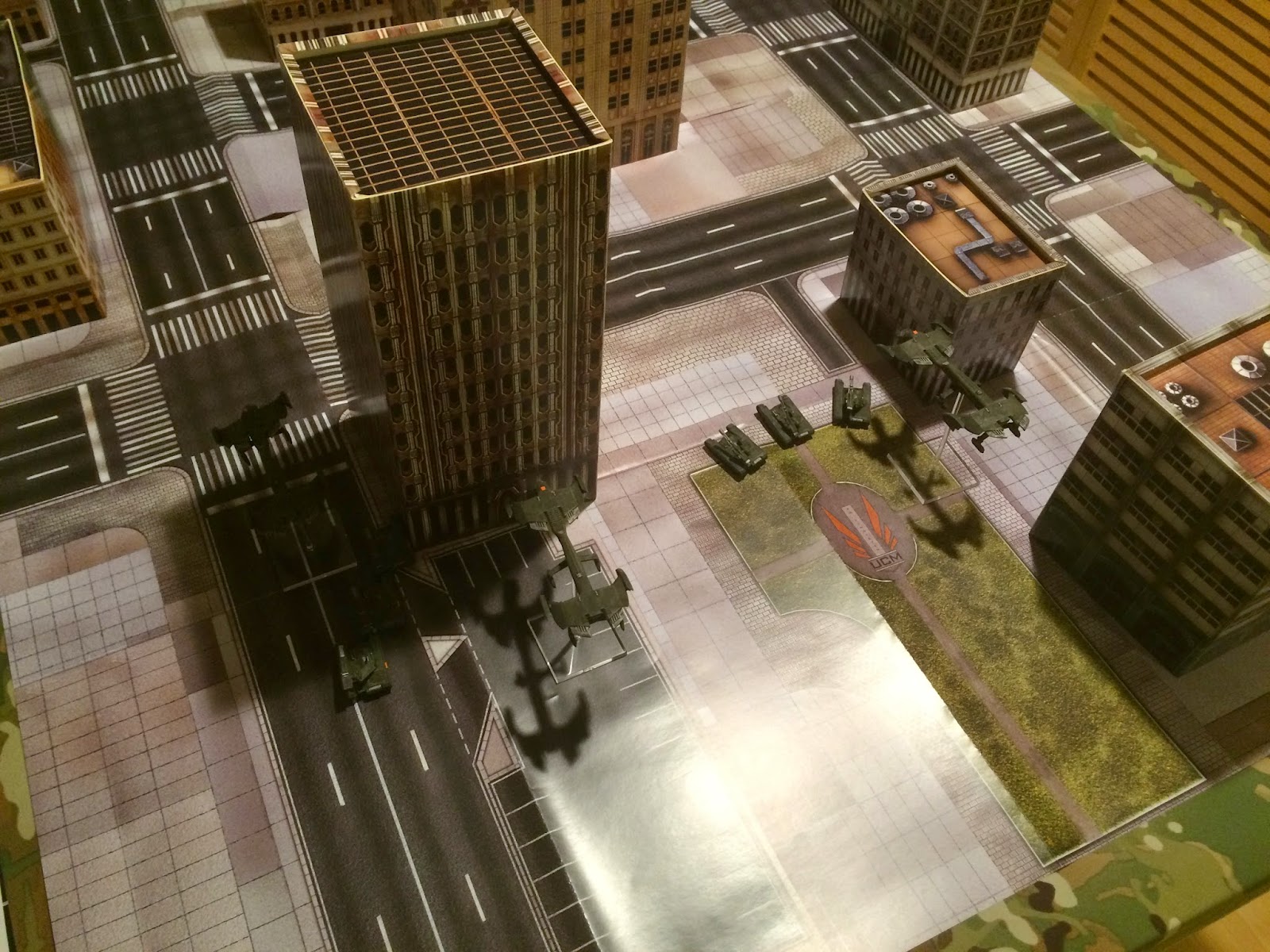 My Turn one, and my first tactical mistake - I was cautious moving on, meaning I only advanced about half way to the objectives.... 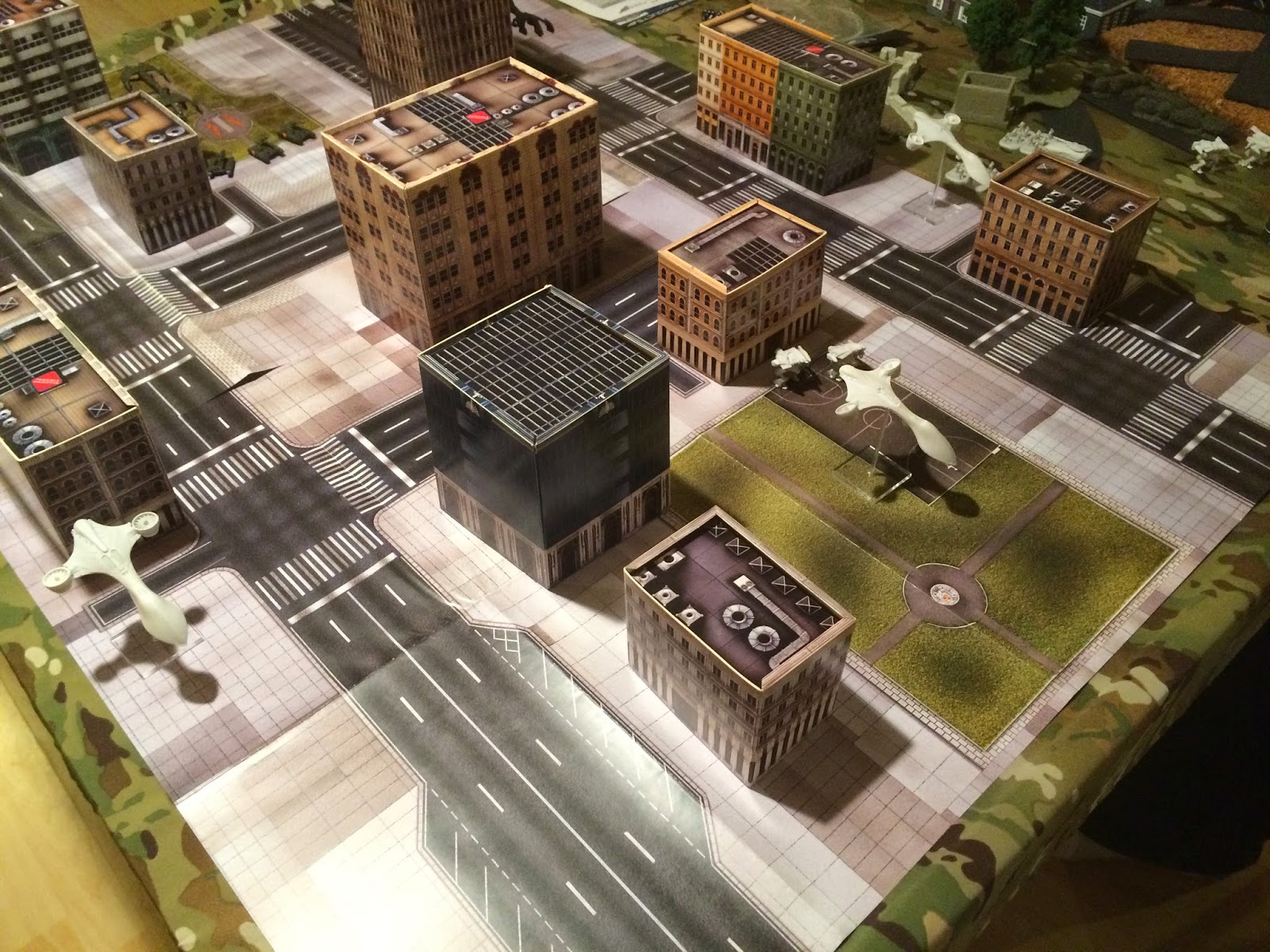 Chris' PHR advance - note the top right dropship, making the push to the far building with the objective - AND how far my Condor dropship is away from it! I should have been more bold in my advance. 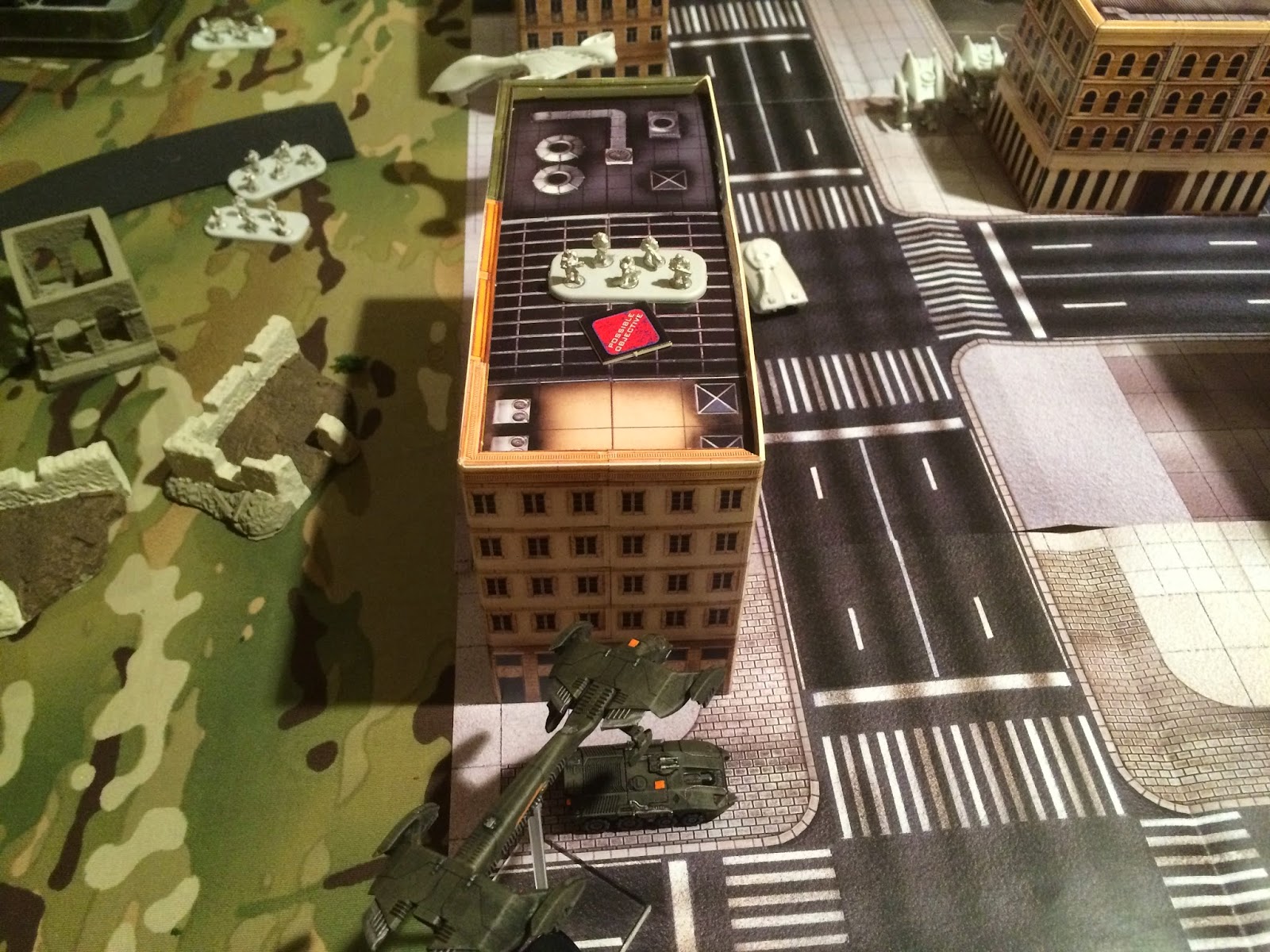 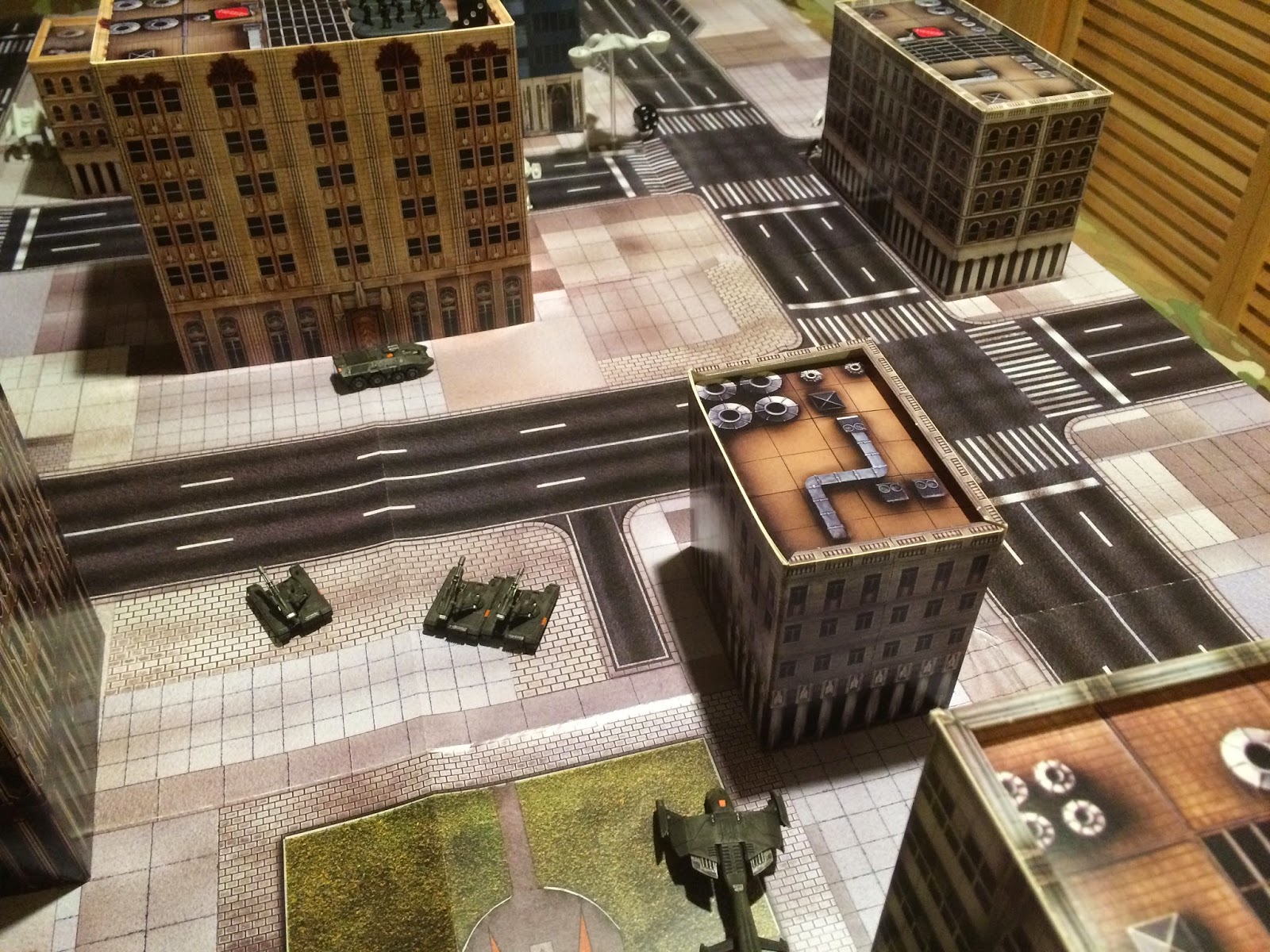 On the other flank, Chris advances his AA walkers, and shoots down my AA transport Condor (bottom right). My AA Rapier tanks now have no ride, so 4" movement a turn is all I have. 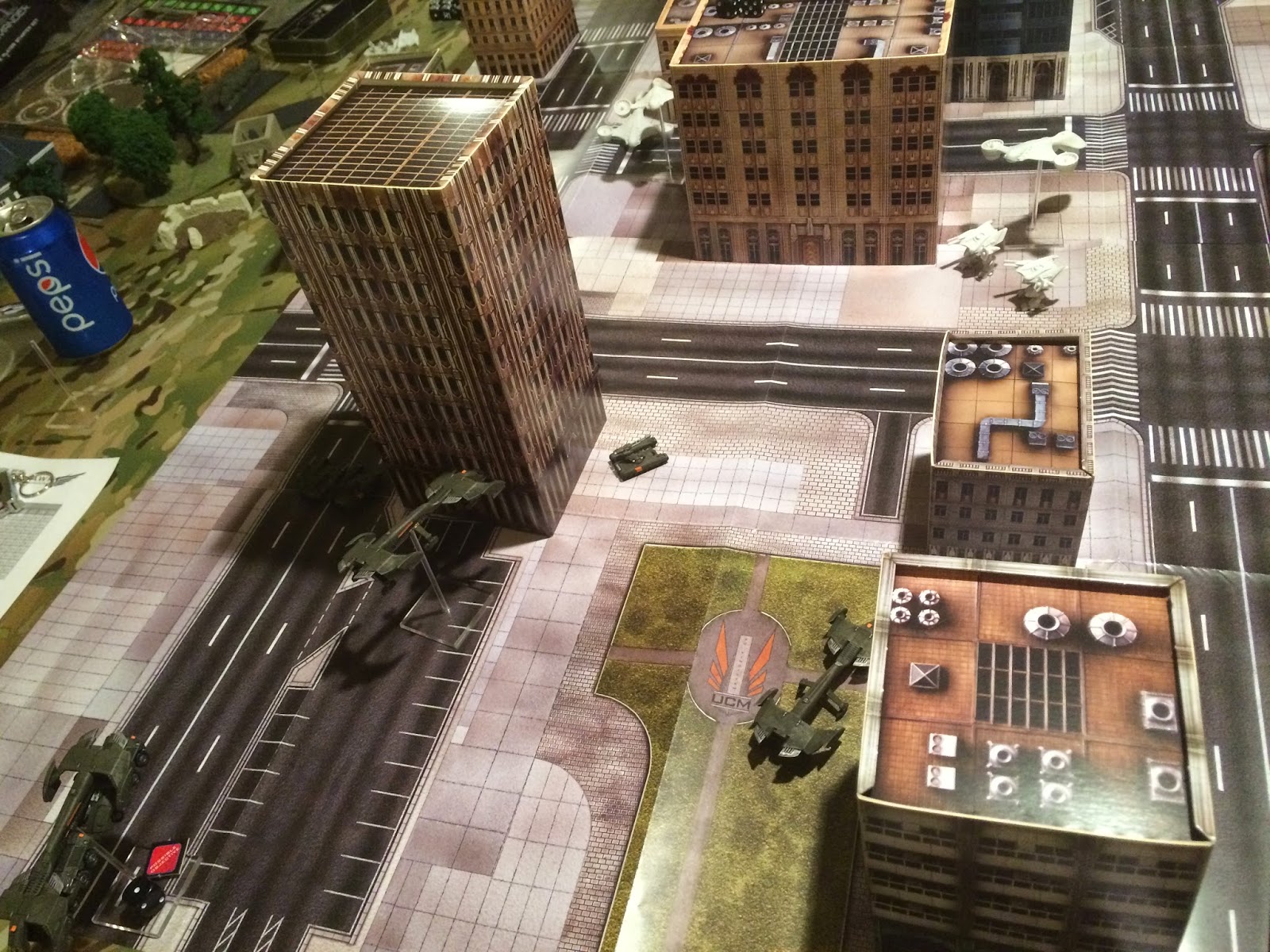 But I did squeek out a win, by running home to mommy!! Bottom left you can see my damaged Condor carrying my BEAR  APC, with the remaining infantry of the UCM. My second squad located the objective in the central large building, and are booking it off my board edge for the 2 Victory Points. What cant be seen is the lucky shots my Sabre battle tanks got on Chris' APC that was trying to get a squad into that central building to take out my infantry. The Sabres knocked out the APC, and I rolled 4+ on each unit to wipe them out due to the explosion. 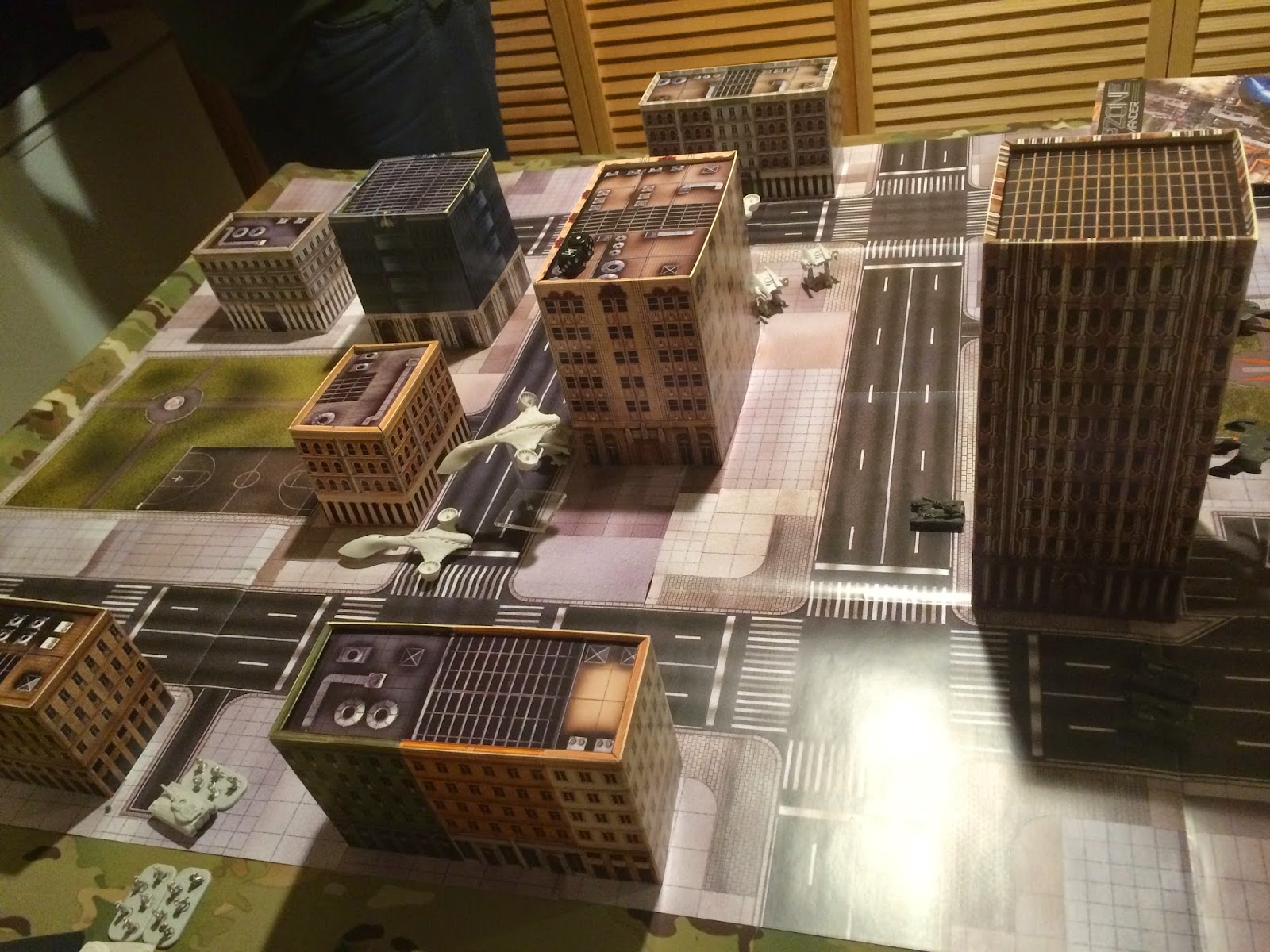 The game ended with a 2-1 VP spread in UCM's favor. It was really fun, smooth to play, and the alternating unit activation, coupled with choosing to move then shoot, OR shoot then move with your units opened up loads of tactical options. Chris definitely had me on the firepower side, and his units where tough (I only killed one APC, one transport, and one walker), but the back and forth felt like it could go either way.

Expect more Dropzone Commander, and this game is very much worth the low cost of entry with a starter army ($50 CDN). Check it out! http://www.hawkwargames.com/

Adding some character to the army

The progress continues on my new Seraphon Army project. After completing 20 skinks and 23 Saurus warriors I have continued into the supporti... 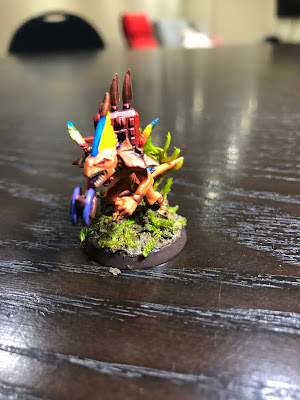