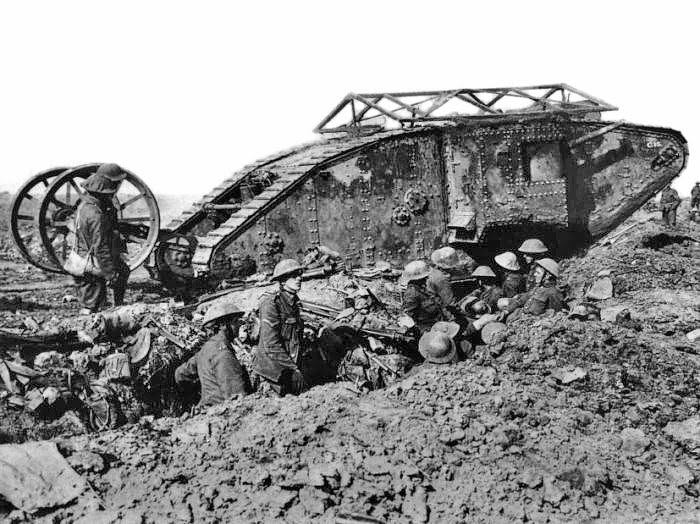 From the inception of the tank in 1916 up to the present time, tank gunnery essentially consists of two activities. First, either the gunner or the crew commander (depending on the type of tank) tries to determine the range to the target. Second, with the range either known or estimated, the gunner aims the gun as best he can to engage and hit the target successfully.

As noted above, the first requirement is to determine the range from the gun to the target. Up to the end of World War Two, a number of techniques were used. If the positions of the gun tank and the target were known, the distance between them might be measured on a map. The main problem here is the time required to make the determination. Crew commanders would visualize the length of a football field (a US field is 100 yards long) and estimate the number of “football fields” between the tank and the target. Nine “fields” is a range of 900 yards.

Some gunners would set their gun sight for a known range: when a target appeared, they would engage it and, if a miss occurred, they would quickly adjust the point of impact that they saw in their sight onto the target and fire a second round. Balthasar "Bobby" Woll, the gunner for the well-known tank ace Michael Wittmann, always set his sight for 800 meters and adjusted his aim from there. Wittmann’s crew scored well over 130 kills in Russia and Normandy. 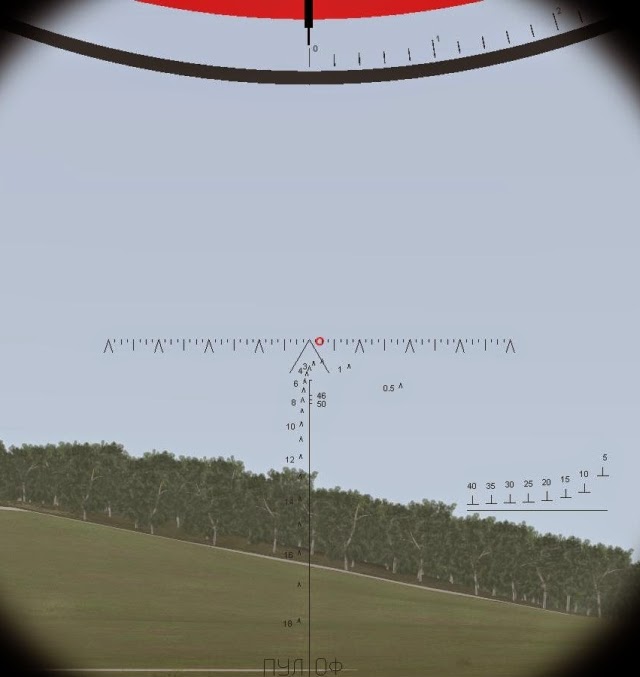 Warsaw Pact tanks used gun sights that featured two sets of small horizontal lines. The lower set ran horizontally while the upper curved upwards. An example is shown in the lower right quadrant. When an enemy tank fitted between a set of two lines, the range could be read off and the sight aligned onto the target. 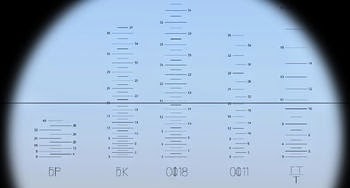 This image shows an even more complicated gunsight, that of a T-62. Each of the vertical sets of lines relates to a specific type or ammunition. 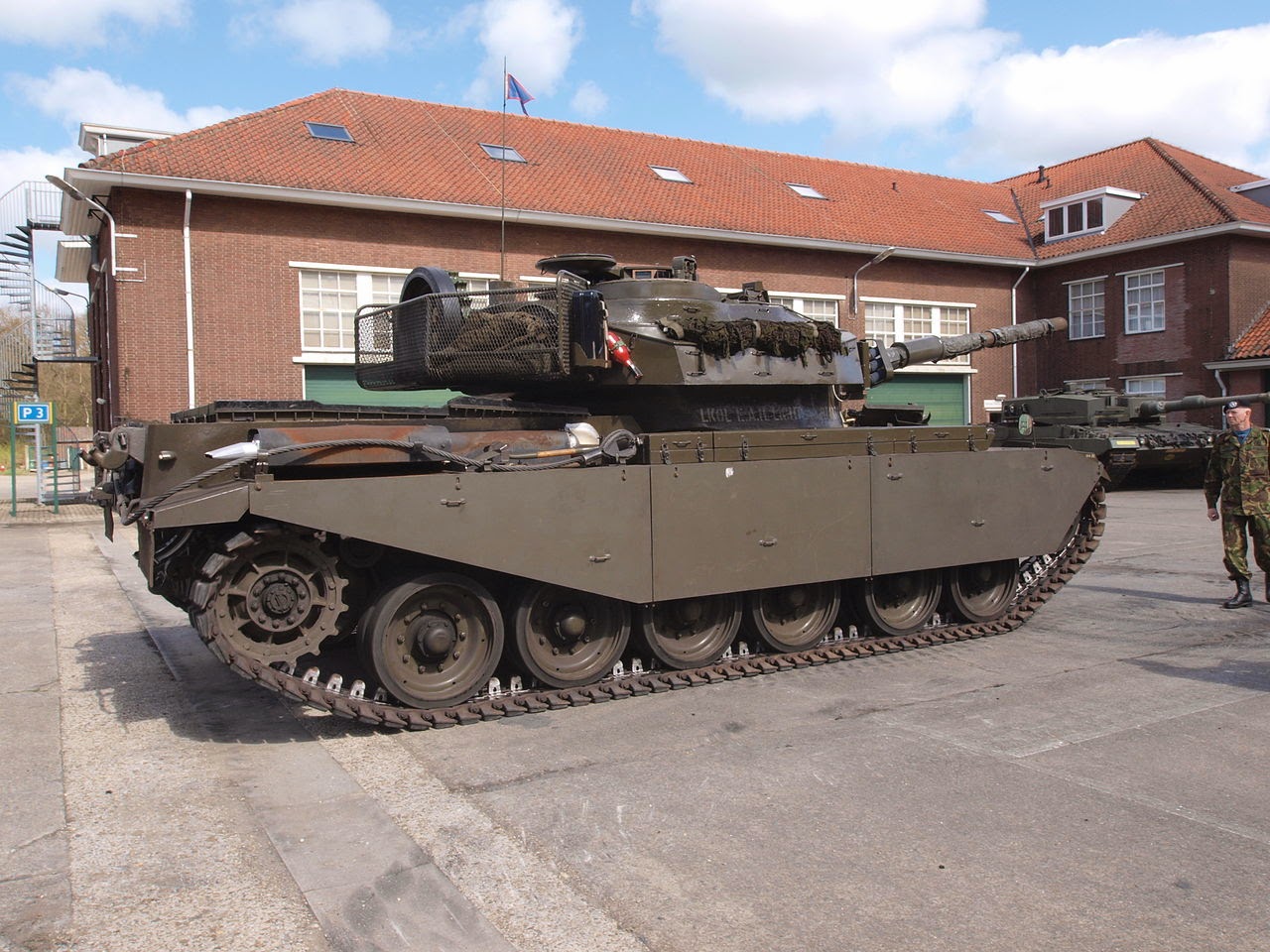 The Centurion gunnery system provided a “great leap forward” in two ways. First, the main armament was power-stabilized in traverse and elevation. This meant that the gunner could maintain an aiming point on a target even though his tank was moving in virtually any direction. Second, the system included a method of quickly determining the range to a target. This was the installation of a .50 calibre ranging gun firing tracer rounds with roughly the ballistics of the High Explosive Squash Head (HESH) round. This meant that the gunner could determine the range to the target, and then employ the required type of ammunition with fairly high accuracy.

Sabot (APDS)- The Armour Piercing Discarding Sabot round traveled at a muzzle velocity of 4850 feet per second (fps), and was used primarily against armoured targets such as tanks. It was a kinetic round, employing a high velocity to punch a hole through armour by means of a pointed tungsten carbide bolt. The effective range was about two kilometers, after which the velocity of the bolt had slowed to the point where it would not likely penetrate heavy armour. The crew commander and gunner could use either the ranging gun to determine the range, or go directly to a main armament shoot if the range was known.

HESH- The High Explosive Squash Head round had a muzzle velocity of 2400 fps. It was a chemical round: plastic explosive was detonated on impact. It was used against both hard and soft targets and was effective out to 3000 meters, as the explosive force was not degraded by lower velocities at maximum range. The engagement technique was much the same as that used for sabot except that, when using the ranging technique, both the ranging gun and the main gun engagements used the same dots: the MBS and the four circled dots in the graticle pattern. This was because the muzzle velocities of both the HESH round and the ranging gun ammunition were virtually the same. However, beyond 1800 meters, the ranging gun technique became ineffective as the ranging dots only went up to that range. Thereafter, as the range increased, the crew commander and gunner conducted a ranging technique using HESH ammunition out to 3000 meters. This could be costly in both time and ammunition.

Smoke- Of the 64-70 rounds of main gun ammunition carried, only about 4-5 rounds of smoke were included. The projectile carried three base-ejected smoke generators. These were ejected by way of a timed fuse setting applied by the loader. A combination of this fuse setting plus the elevation of the main gun (determined by the required range) brought the smoke into effect. A direct fire smoke engagement could be fired out to 2800 meters. Using range tables, an indirect fire engagement could be fired out to 4000 meters, although the smoke screen provided would be less and less effective as the range increased due to dispersion of the smoke generators.

Canister- The canister round used in the Centurion was filled with small cylindrical projectiles which were fired at a muzzle velocity of 3000 fps. The maximum effective range was approximately 400 meters. The effect is to turn the main gun into a giant shotgun. This can be used against enemy infantry even when in proximity to friendly armoured vehicles, as the projectiles do not penetrate armour. In addition it can be used to create entry points to buildings, reduce wire obstacles and clear heavy vegetation, as well as strike low flying aircraft and helicopters.

Coaxial Machine Gun- The .30 coaxial (“coax”) machine gun had a rate of fire of 5-600 rpm. The gun was used primarily against personnel, but it could also be used against “soft targets” such as unarmoured vehicles. Its optimum range was out to 700 meters, with a maximum effective range of 1500 meters depending on the observation of the fall of shot. This was because of the tracer burning out from 800 – 1200 meters. The gunner engaged targets by first firing a ranging burst that included 1 or 2 tracer rounds. Once the fall of shot was seen to be effective, a longer “killing burst” which included 4 or 5 tracers would be repeatedly fired until the target was neutralized or destroyed. 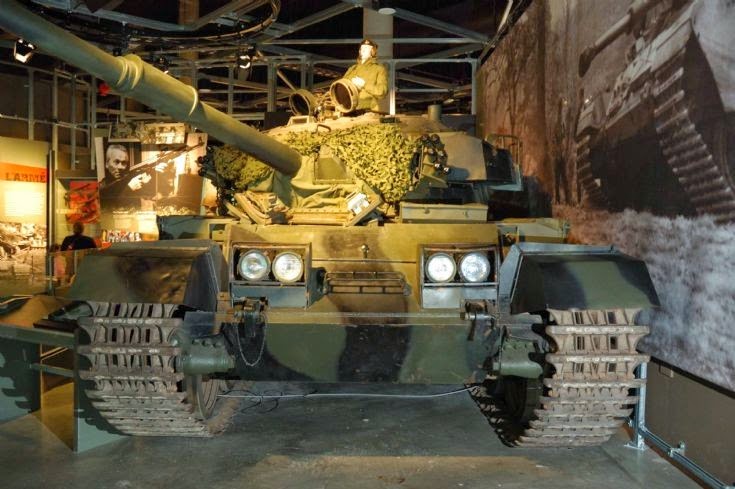 The Centurion was an exceptional tank for its day. It was up-gunned, up-armoured and employed in environments for which it was not designed. In every instance the Centurion performed up to, and above, expectations. Centurion was a first rate AFV, and I count it a privilege to have served with it.


I thank Lieutenant Colonel (Retired) Brian Jackson for his detailed input into this article. Brian was an Officer Commanding Gunnery Squadron at the RCAC Armoured School at one time, and qualified in Advanced Gunnery. Additionally, he has been a close friend for many years, and I greatly appreciate his assistance. Thanks, Brian!