It's a long story and it all kicked off a little over a week ago at Historicon (HMGS). A bunch of the Dice Devils crew made the 10+ hour drive down to Fredericksburg VA for this gaming convention. 6 of us were entered in the Mid War US Nationals tournament for Flames of War. This event will be covered by some of our other members on this site, so I will leave it to them, but suffice to say a great time was had!

So Napoleonics eh? Men, in their late 20s to 30s? No way. Not gonna happen. We are the lads that used to drool 40k! We play Warmachine, Infinity, FLAMES OF WAR - Not stuffy old cannons and muskets crap!

Well when you see this kind of thing in person... 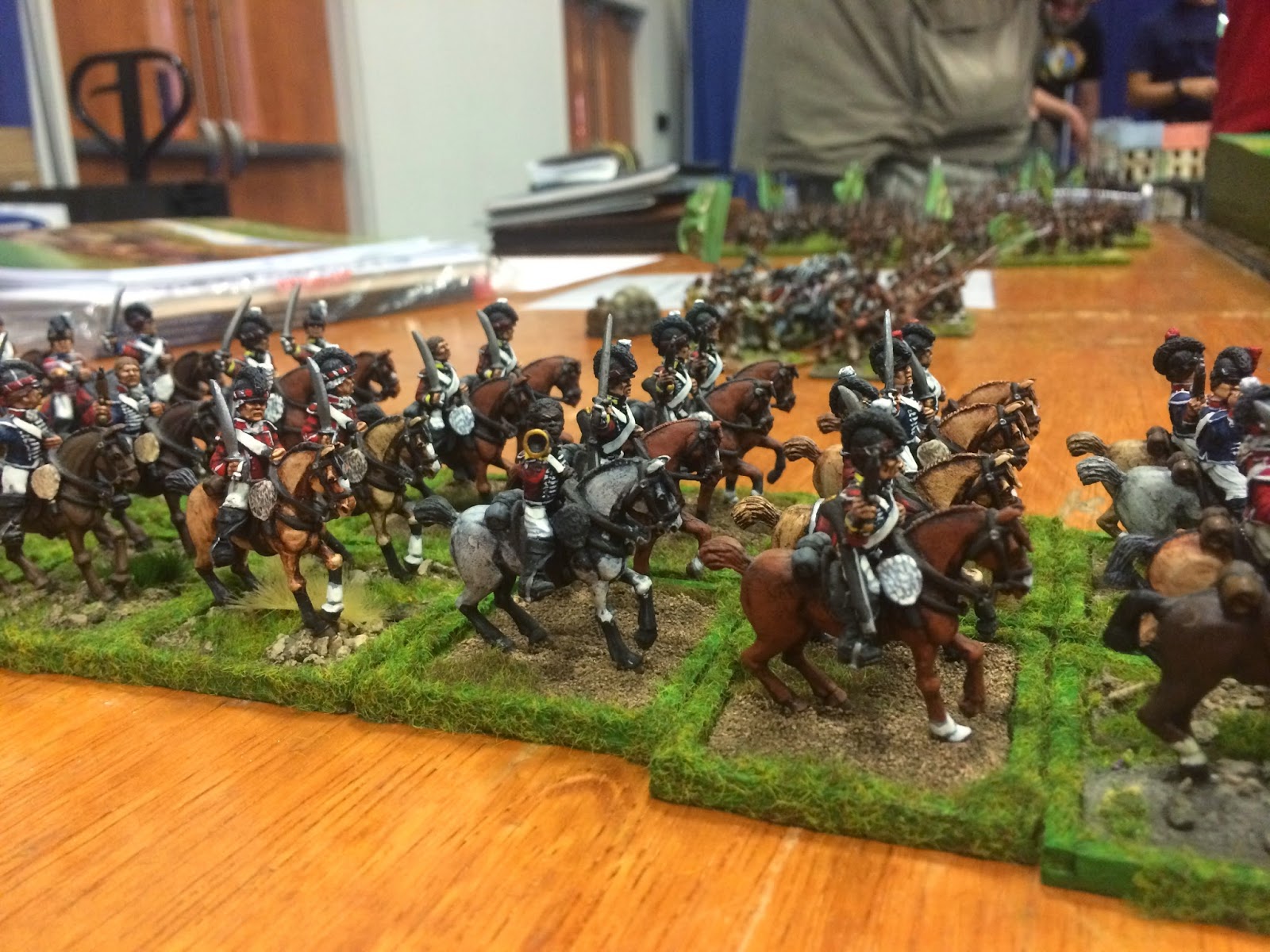 it is hard to not get caught up in the idea of massed troops, and the defining moments of western civilization. Before I start sounding like a history professor, let's just agree that war gaming, regardless of the period, has an appeal that can easily draw fans of Sci-Fi to Ancients or Flames of War players to Napoleonics.


So with that out of the way, where are we starting with all this? Well, with Fields of Glory (http://www.fieldofglory.com/). It is a rule set put out by Osprey and Slitherine. We are obviously focused on their Napoleonic segment, but the rule system covers many time periods.  This book can truly be judged by it's cover - it is stunning. It has the amazing artwork that one would expect from Osprey, coupled with a concise index and easy to learn(and Free!) quick start rules on the website. What made me pull the trigger was the sweet deal I got on the main rule book and the Triumph of Nations expanded forces books for $40. That's right - two hard cover Osprey books, brand new, for $40.

After a quick scope out of the flea market area at the con (some say reason enough for the trip alone) I landed 450+ 15mm British infantry for $60!! For a minimal investment, how could I not try this out? And being 15mm, means we have loads of terrain, so it is a no brainer!

After getting some basic troopers based, we decided to have a go at these rules this past Friday. We played the starter scenario out of the Quick Start rules PDF (http://www.fieldofglory.com/fog_nap). As a lead up it states:

"The scenario is set in late 1813, with a
small division of about 7,500 Austrians attempting
to block the path of a slightly smaller division of
6,000 French. The French are attempting to break
through the Austrian line to safety before the rest
of the Austrians can arrive."


Here is some of the action:


Matt Varnishs French on the far side, my proxied British stand in as Austrians 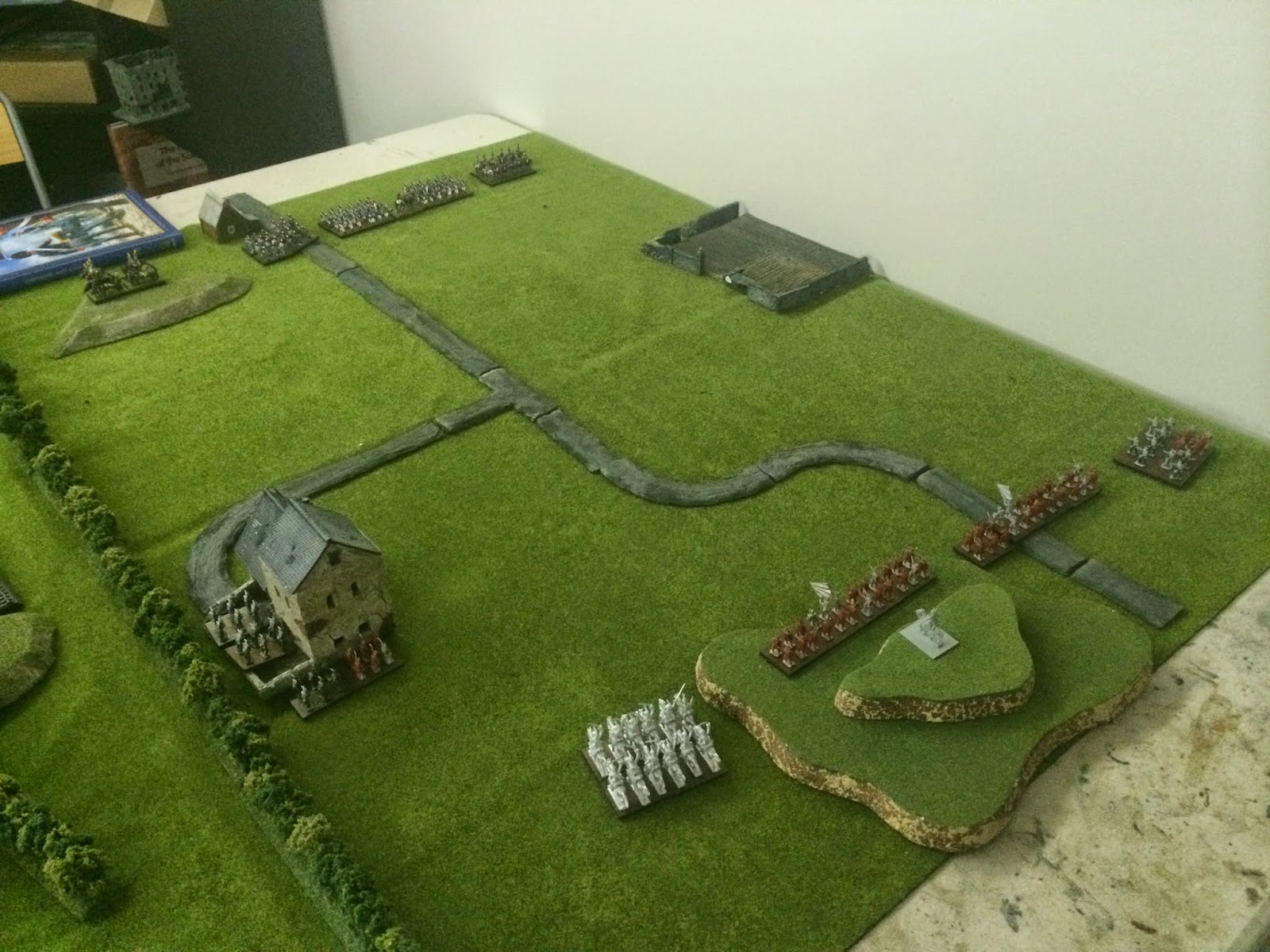 Close up the French forces 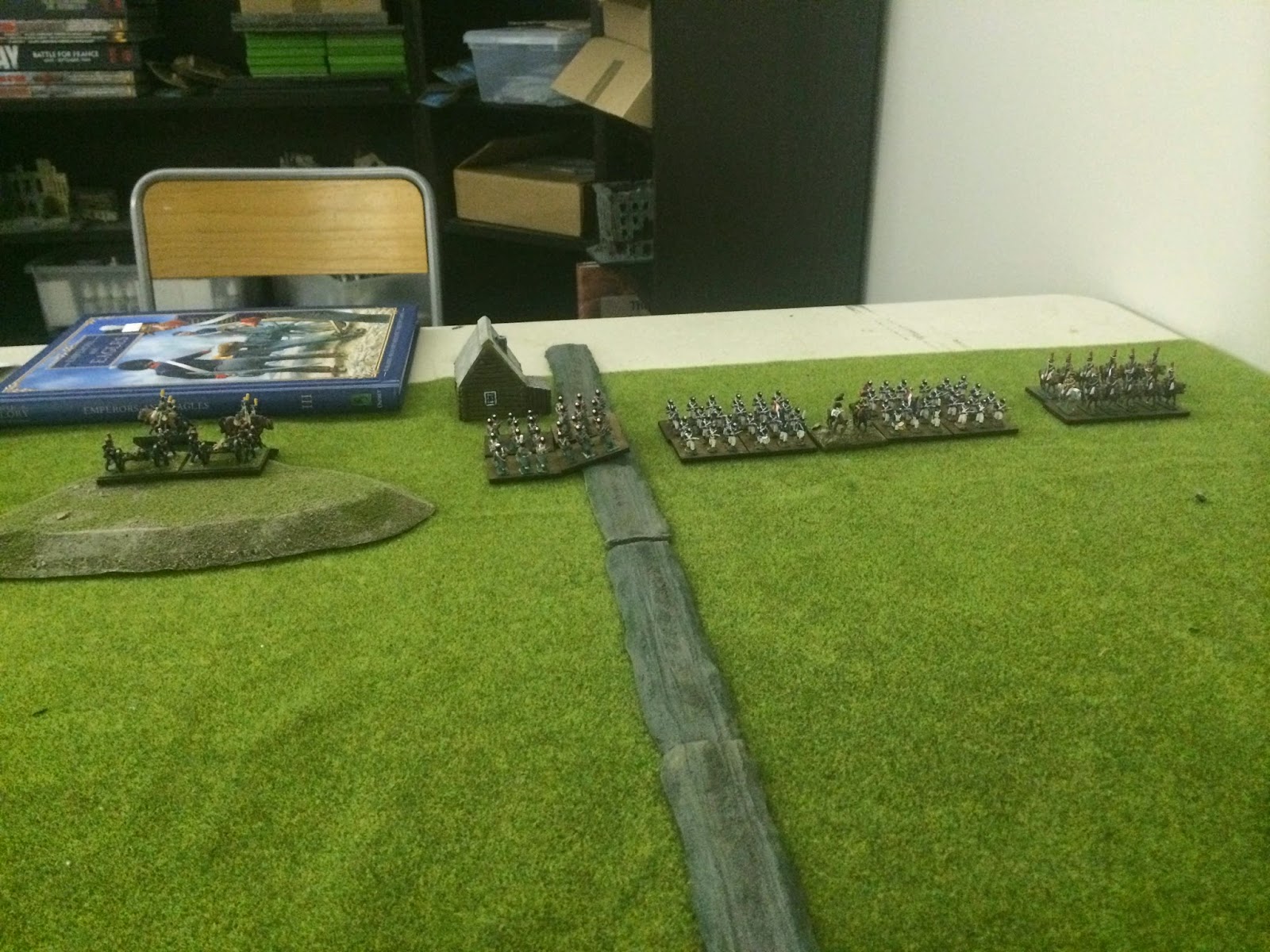 The French advance quickly, and the artillery starts hammering the Austrian lines. Notice the Austrian Jaegers, hiding out in farm house on the left flank. 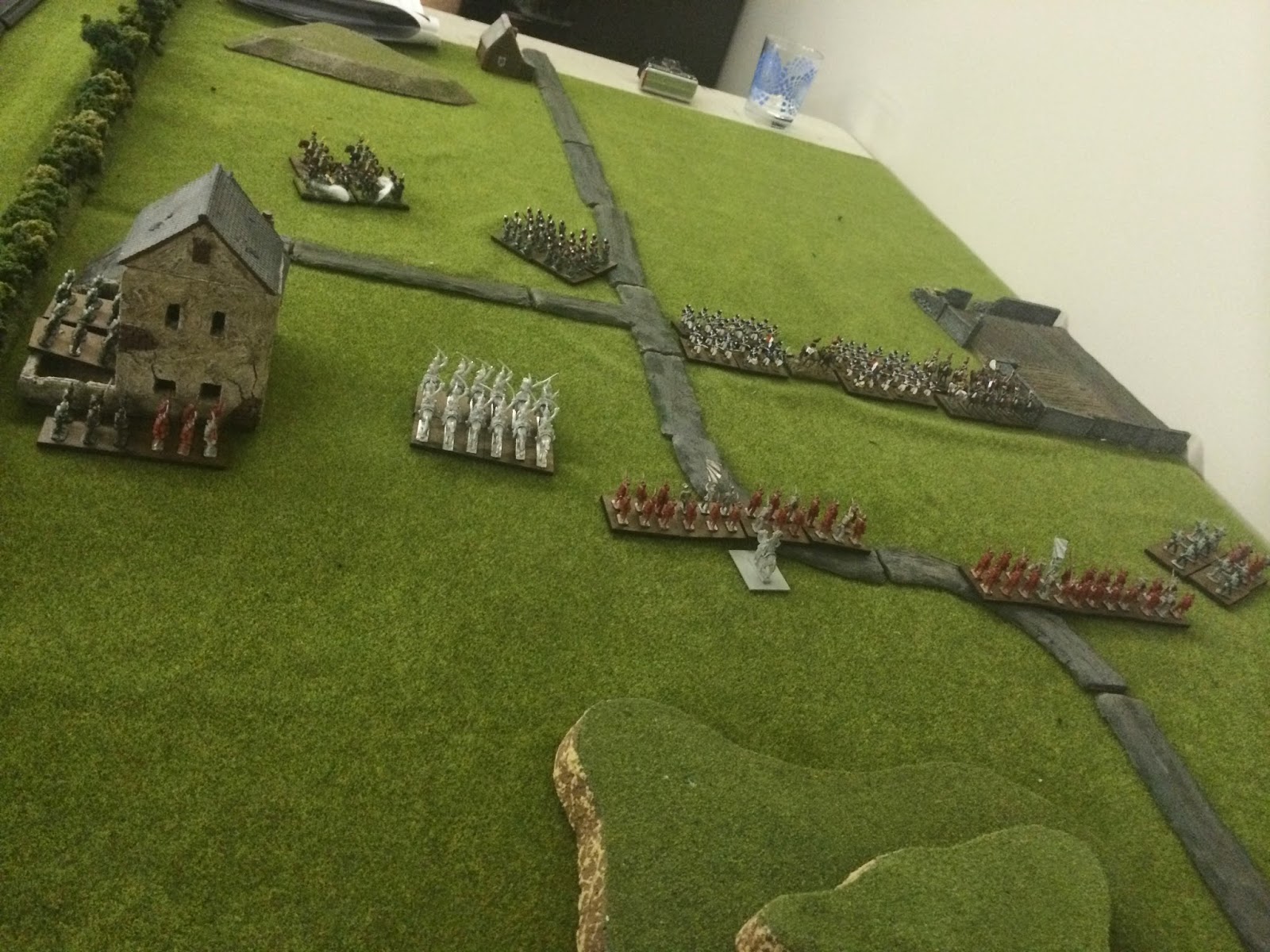 The Austrian cavalry, Hussars, charge and break one of the French Line infantry battallions 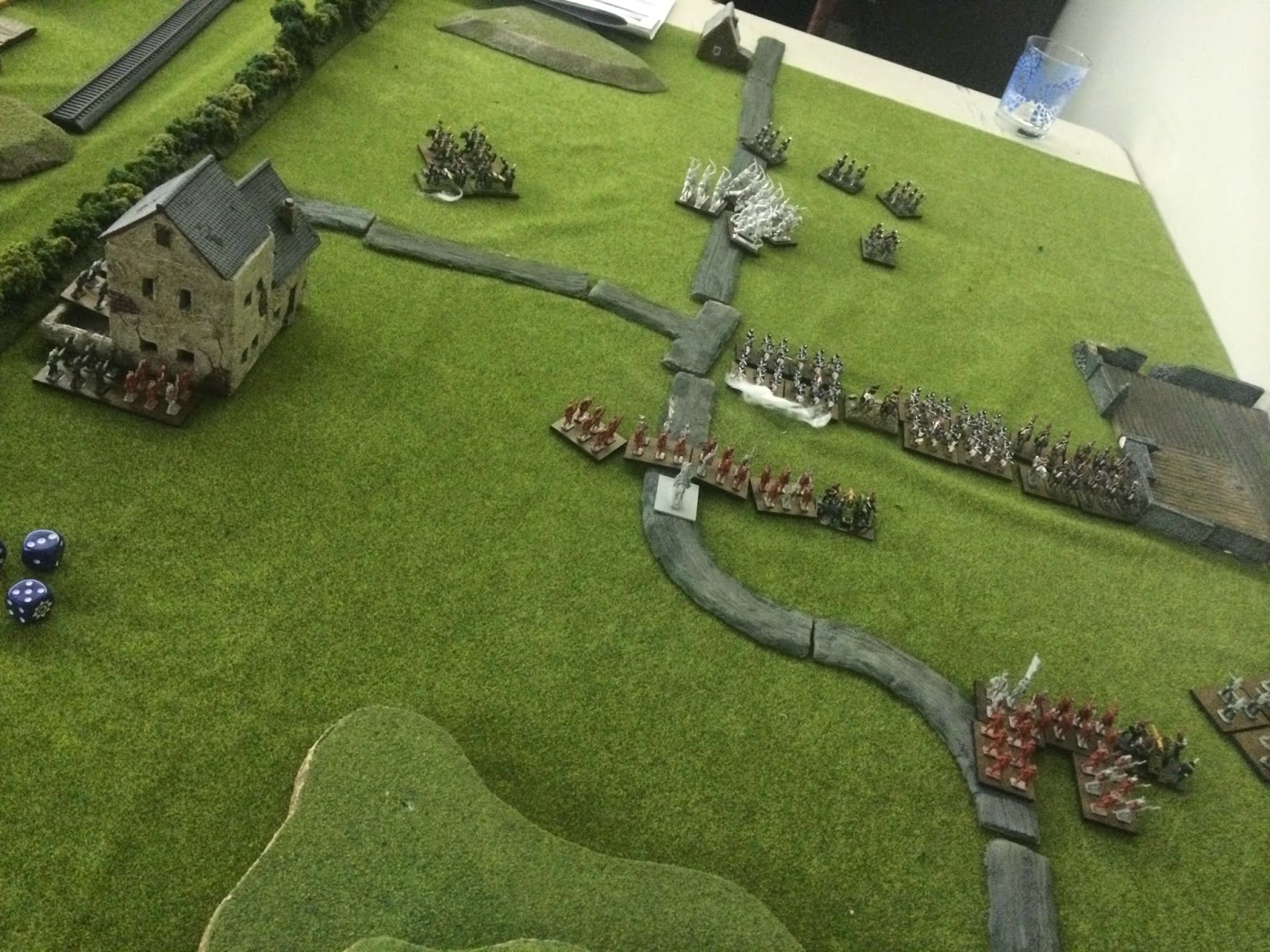 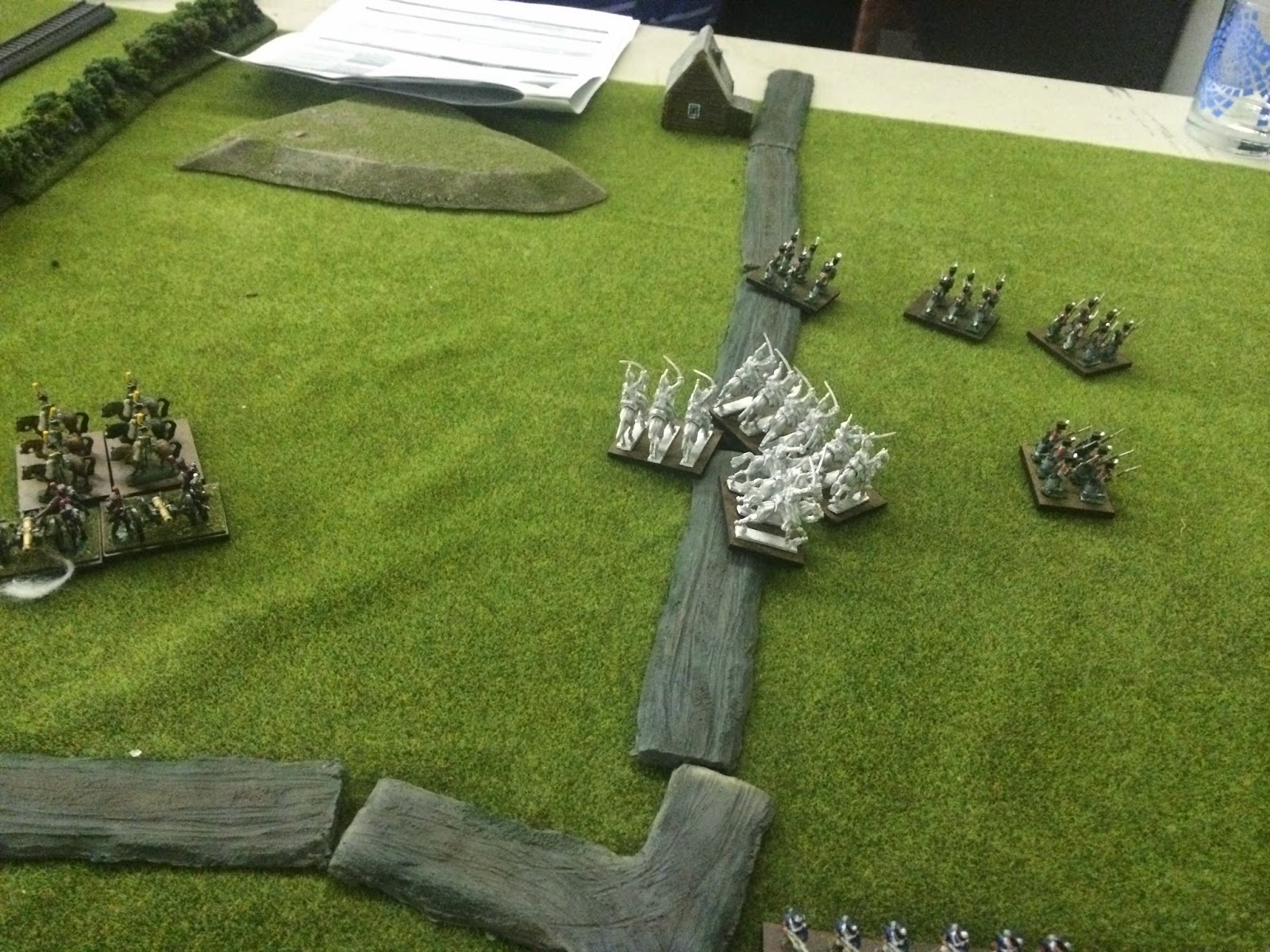 With the Austrian lines faltering, the Hussars follow their orders for securing the Frenchs back lines of communications, cutting off the road. 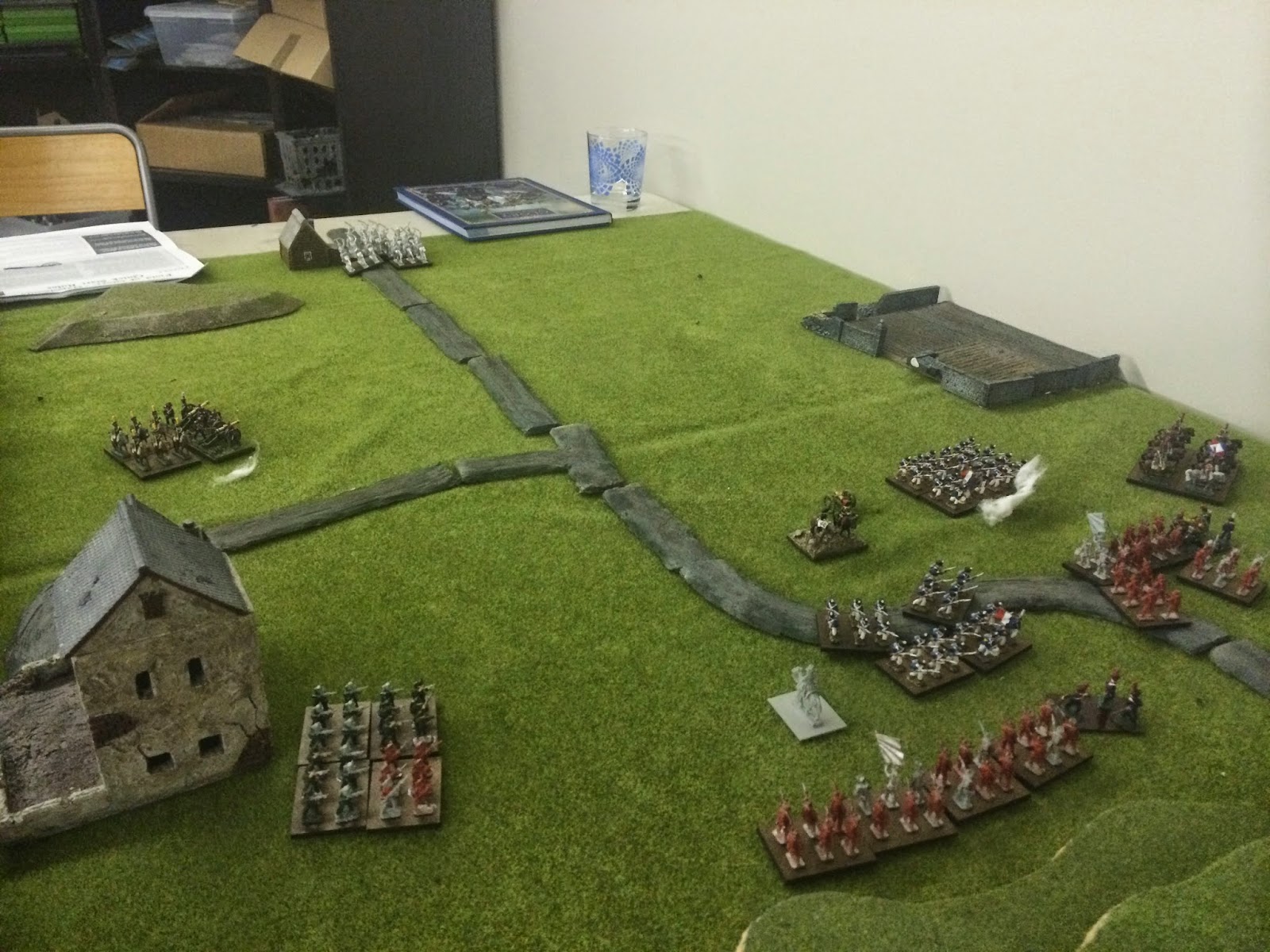 It's too late for the French artillery to swing the battle, the Austrians win the day, delaying the French advance until reinforcements can arrive. 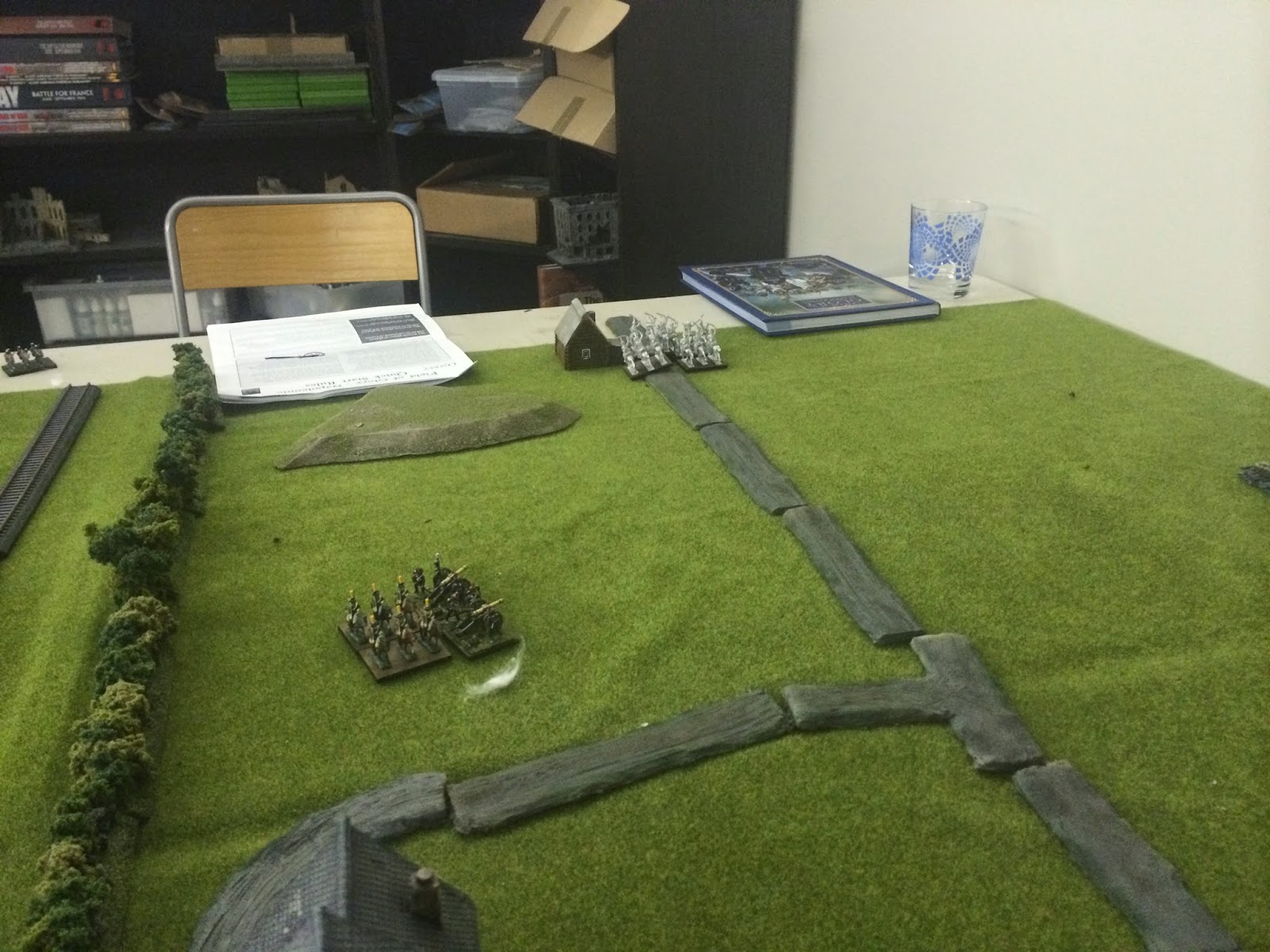 The units you see represents a brigade or regimental size formation (i.e. several infantry battalions or cavalry regiments) or a group of artillery batteries.The idea being that the scale of the game represents thousands of troops - so that Farm house could even be construed as a small farm village for example.


Units are then given different ratings for their skills or "Elan", Training  and any Special Abilities.The option to attach skirmishers, artillery, additional officers or even cavalry to your units really gives the game a feel of customization, yet retains historical reality. Along with covering movement, firing, charges etc, the rules also contain Cohesions Tests to check morale, and a Points of Advantage (PoAs) system to determine the outcome of firing and combat - both players fire on each turn AND attack in close combat - you are always playing! I love this mechanic.

Commanders work a little differently than other games I have played. There are different levels of generals with different skills levels and this affects the number of Command Points they have to direct their troops. Command points are required to do complex moves, like reform when being charge and they are restricted based on the skill level of your commander. One cool part is that this skill level is represented with a points costs, allowing for more customization.

Another thing the rules is that there is hardly any need to remove any bases! You retain almost all your figures on the table throughout the game. Sometimes you will need to remove one base to show that it is Spent – but once a unit is broken, if it cannot rally, it is removed all together.

All in all, we played two games, and it really started to come together once we got our head around the phases of the turn. Charging (Assaults), then firing (both players!) then movement, then combat, ending with recovery (morale) is a really neat change from the other "I go you go " type systems we have played. Where will this take us? Who knows, but it has proven to be a fun distraction so far, and there are about 8 of us picking up small forces, so you can expect to see some more Napoleonics smattered in to the articles in the months to come.