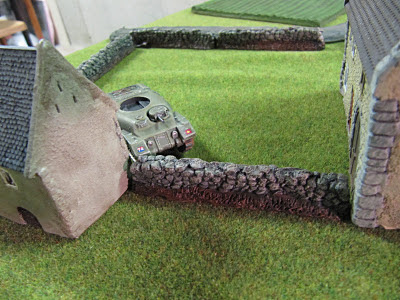 (above) Rob's usual flair for the historically accurate means he is using this Ram Kangaroo Sherman as his OP Shermans, It had a MG turret as you can see here for the troop transport version, or a smaller gun turret for the tank version. The transport version was an improvised transport much like the De-Frocked Priest. 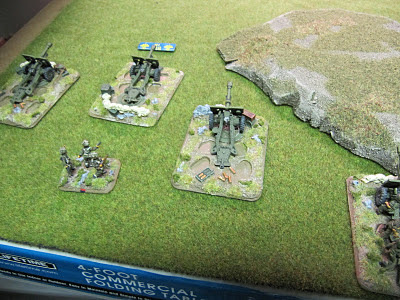 (above) Royal Canadian Artillery. Most of the crew are still being painted, but will look great when finished. Its worth clicking the thumbnail to see the details he has put in to this force. 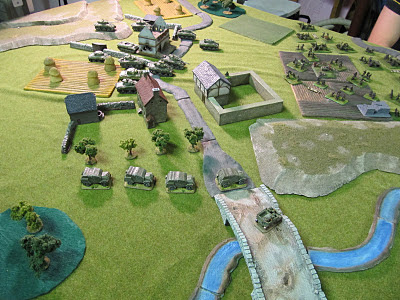 (above) as Rob's Shermans sweep towards the US defensive position under smoke, you can see the C15-TAs (Cdn Scout cars) being used as gunless halftracks for his Motor Platoon. Excellent find Rob, and very historical. 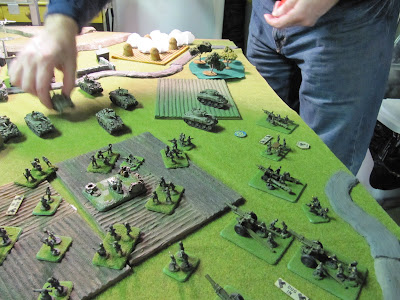 (above) Shermans within assault range of a tonne of Bazookas... 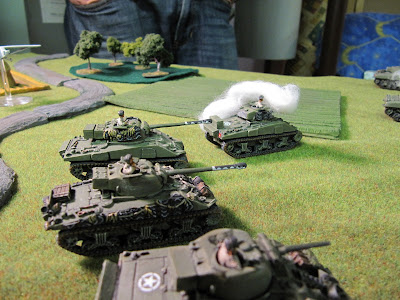 (above) close-up of Rob's Cdn Armoured Corps.. note the accurate barrel colouration.. black on top, so it looks like a regular 75mm to hide the 17pdr, with white underpaint, to limit the shadow of the barrel on the ground. The zoom-in shot reveals its working, as you can't see the shadows from the desklight! Great Stuff!


Scroll Down to find out how the game ends, as I had to start my game at the top of their last turn..


Rob, facing down a 4-3 loss, decides to pack it in, as he was in no position to keep going, facing Coy Motivation tests. Victory for the US troops, including a posthumously awarded Medal of Honor.
By Matt Varnish at December 06, 2011