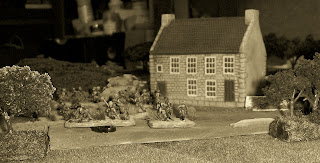 Bottom of 1:
No Reserves. Tanks coming straight at infantry. FSPs moving up and flank left.

Bottom of 2:
No Reserves for the Panzer Co. Tiger's lone shot on the move over the heads of a Pak 38 gun team.
Pak 38 shoots back trying to kill a panzer III.  No dice and they are no longer Gone to Ground.  FSP Panzer III M and Ns arrive top left.

Tiger kills the active pak 38 after the 10.5s arrive.  A little surprised the second platoon of Panzer III Js didn't come on instead since his observers are still not quite in position and my flanking infantry could be vulnerable.

Bottom of 3: FSP
No reserves this turn.  FSP Artillery range in a kill one Panzer III J (late) in the vineyard.  FSP Panzers move up to the ruined church.  I leave one a little exposed hoping I pull his Panzer IIIs out of the vineyard.  But the Tiger has other ideas.  FSP observer digs in.


Tiger moves up and shoots at FSP tanks (M and Ns) by the ruined church; misses.  Panzer arty range in on same FSP tanks bail one.  Panzer III Js in vineyard, feeling flanked by the enemy M and Ns, stay hidden by the farmhouse but fail to stormtrooper away from ranged in marker.  Panzer III Js come in from reserve in far table quarter and shoot at the hiding Pioniers.  Kill a stand.

No Reserves.  After losing a stand to MG fire the left flanking FSP shuffle out of LOS into the woods staying in command. FSP M and Ns fail to impress when shooting at their rival tanks.  FSP arty opens up on tanks in vineyard; all guns repeat.  Kill anther III J (late).  Central FSP make a break, out of the safety of the woods, for the central objective.


At a 'Crossroads': 1iC, 2iC and Observer move up to crossroads but MGs fail to impress.  Things are about to get interesting.

Bottom of 5: FSP
No reserves. Still at the 'Crossroads': Knowing the risks, the central FSP platoon try to dig in.  Fail.  One enemy tank killed, one bailed.

Tiger moves up at the Crossroads.  Kills another FSP tank.  1iC and Observer continue to MG central FSP platoon.  One hit.  Saved.

Marders show up but miss the Tiger.  After failing to dig in, FSP decide its time to get active as they must push the enemy away from the objectives.  Flamethrower double bails Panzer 1iC.  He fails motivation/morale with the reroll.  Left flanking FSP assault Observer tank, take casualty on the way in.  Kill the Panzer II.  Consolidate into crossroads.

Bottom of 7: FSP
Marder III Ms move up and try to get cover, engage but miss Tiger.  Observer ranges in on Tiger.  Doesn't do anything.  Pioniers move in.
With the Tiger and the 1iC down a failed Co. morale check will end game top of 8.
Thoughts:  I may have failed to do a motivation check to assault the Tiger and the Observer tanks.  But had I failed it likely would have just prolonged the inevitable.  Future opponents, please remind me to motivate my troops to assault tanks.  Coming from 40k this is not an instinct I possess!  I think the Panzers could have been more aggressive.  They and their arty seemed to spend whole turns doing very little.  I guess the FSPs grabbed the initiative by using the terrain and table quarters to their advantage.
Please share your thoughts?
By Pripyat at June 11, 2011