Wow, what a great game. I played a long time pal, Kilroy's Boots, and his Vulcan lead Salamander Marine army. His consisted of (roughly): a pair of 10 man tactical squads in Rhinos, 10 tactical squad in drop pod, Dreadnought in drop pod, Land Raider Redeemer, 5 man Terminator assault squad (thunder hammers) and Vulcan himself (which meant all the meltas he had, and he had many, were twin linked - all of them!). It was a solid list, and close to what I would build as a marine player, mobility and deep strike are always a strong combo.

My eldar consisted of the following: a pair of Storm Guardian squads with fusion guns led by a warlock, both in wave serpents with twin linked bright lances, a unit of pathfinders (6), unit of Fire Dragons (6) with exarch, Farseer (attached to a storm guardian squad), a Fire Prism, 2 Falcons, and a Vyper. I only used so many tanks because my bikes are not painted yet, so I didn't want to field them. I plan to pull on of the units of storm guardians and one of the Falcons to fit a couple squads of bikes once they are painted.

The mission was Capture/Control (2 objectives) with Dawn of war setup. Here is how things looked the bottom of turn 1, as Kilroy kept everything in reserve as did I (apart from my pathfinders infiltrating into the bunker) and my 2 wave serpents deployed in once corner. I figured since he went first, I would be in position to take pot shots at his tanks as they came on the board. 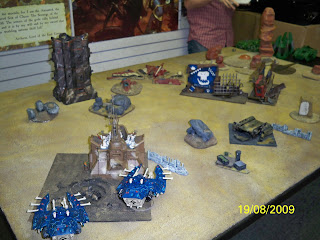 Turn 2
Things got bloody very fast. Turn two saw Kilroy's WHOLE army come in (lucky bastard). He deep striked his Terminators and Dread right on top of my objective ( the little stash of crates to the right of the serpent in the pic above). This had me a little worried to be honest, as he also deep striked he tactical onto his objective. But then it was my turn, and I rolled for reserves.....and they ALL CAME IN! Wow, guess that makes two lucky bastards, as it would allow me to focus my whole armies fire power on the two units sitting on my objective. I would have to worry about his objective later....Bottom of turn 2 pic below. 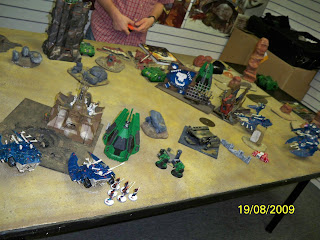 From this pic, you can see that I have destroyed Kilroy's Dreadnought (the drop pod remains) and most of his terminators, and my other tanks are obscured from his view on the far side. They had clear line of sight to my objective, and this would serve me well, as Kilroy proceeded to send units towards my objective piecemeal, allowing me to focus fire and destroy them one at a time. 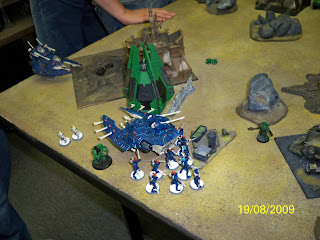 Turn 3-4 saw Kilroy send a 10 man tactical squad in a Rhino straight at my objective, only to get popped by Pulse Lasers and the squad moved down with scatter laser and fusion gun fire. His two remaining Assault Terminators did assault and wipe out the Fire dragons, but they had done there duty in destroying his dread and most of the Terminators. A valiant death! The pic above shows the one remaining Terminator and lone sergeant from the tactical squad. Also note my fleeing pathfinders, who decided it was better to book it and fight another day. 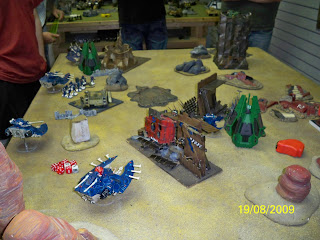 From the pic above you can see my Storm Guardians holding my objective and the rest of my army positioning for the moves to contest Kilroy's. You should be able to make out my Vyper that at the bottom of turn 5, jetted 24" to contest his objective. This was a solid plan, except when the roll came up, we found out that we were going on to turn 6! The only development for turn 6 was me moving my 2ND wave serpent with Storm Squad in to contest Kilroy's objective (in case he downed the Vyper) but it was not needed. The game concluded with me securing my objective and contesting the other, landing this virgin Eldar army its 2ND victory. 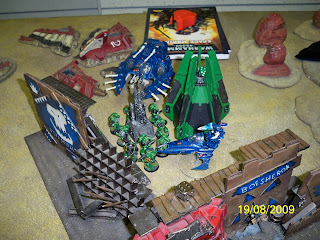 Props go out to Kilroy, who was not only a stellar opponent, but also one who plays at the rapid pace I do, allowing us to get a 6 turn game finished in under 2 hours. His army was solid, and I look forward to meeting it again on the field once he has his Storm Speeders finished - that will really add a challenge for me.