I know this is a bit of a surprise considering all the painting and hobby time I am putting into my Seraphon for AoS but I recently received an invitation to try out the new release of Warhammer 40,000 (40K). I jumped at the chance to hang out, have a beer or two, and try a new system that is getting a lot of hype online. I pulled out my old (and shockingly badly painted) Chaos Marines and headed out the door!

My CSM are actually Emperors Children - the first founding legion devoted to Slaanesh. For the uninitiated Slaanesh is the Chaos God of Excess (be that pain or pleasure). A local fellow gamer dad invited me over to his place to play a socially distanced and mask wearing small game of 500pts. The list I took was the following:

Richard (Thank you again for hosting!) was trying out his beautifully painted Indomitus Space Marines painted up as Nova Marines. His force had a Lieutenant, 2 units of 5 Space Marine Assault Intercessors, 3 Blade Guard and 3 Space Marine Suppressors (Jump pack troops with Autocannons!!?!).

Click on after the break for some pictures and a quick rundown of how the game went!
We played a 4 Objective game represented by the two black circular bases(top and bottom of the picture) and the small crashed Tau ship and wrecked dreadnought to the right and left respectively. We started in opposite table quarters more than 9" away from center. He won the roll for first turn. 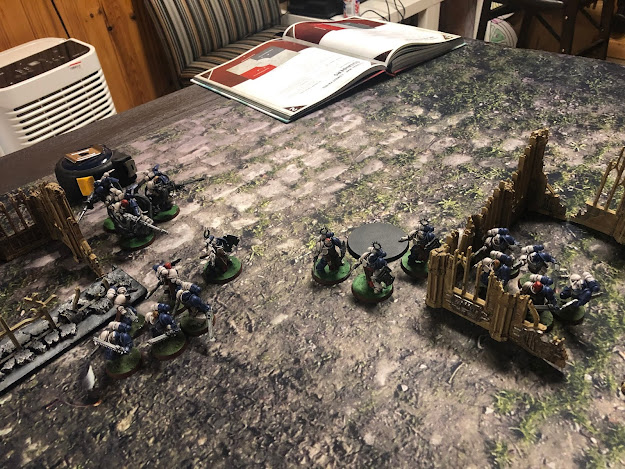 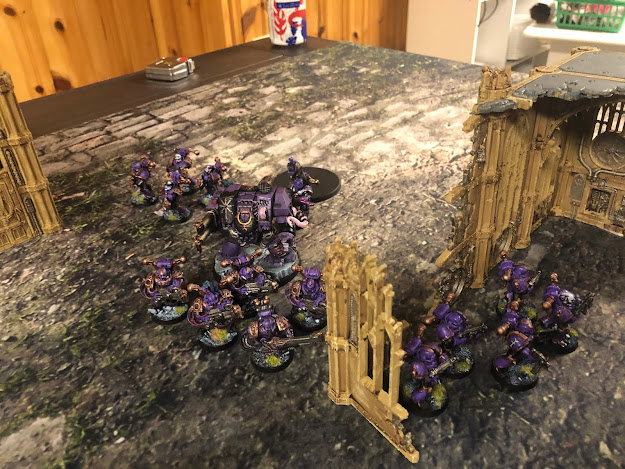 My Emperors Children painted circa 2009! They are on the original 25mm bases but should be on 32mm so a fresh re-basing of the army will be required! Great Camerons IPA in the background ;) 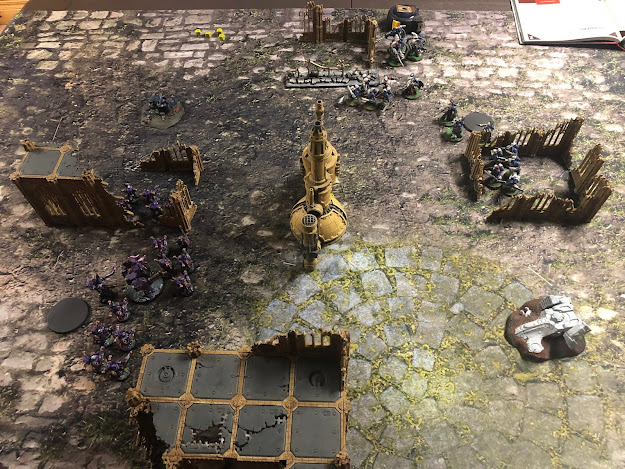 Turn one from above 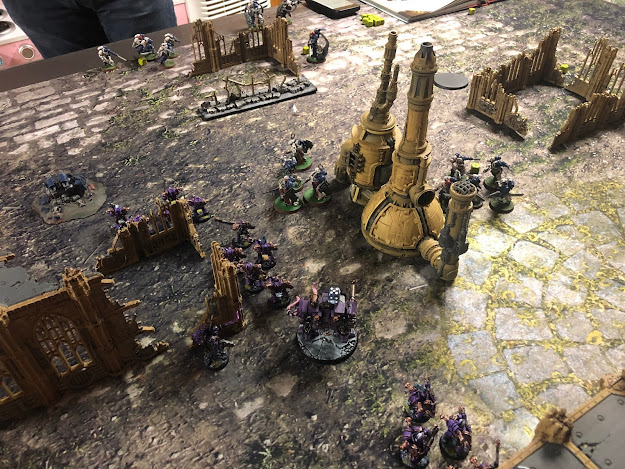 After the bottom of Turn one above. Richard advanced with everyone, took some shots at my Sonic Dreadnought with his Suppressors dealing 2 wounds to him, and not much else. My returning fire was devastating. As you can see above I was able to delete one whole unit of Assault Intercessors heading for the ruined dreadnought objective. I then used the stratagem "Endless Cacophony" to allow my Sonic Dreadnought to fire a second time! He removed 2 of the 3 Suppressors that posed the biggest threat to his armor. Things were looking good for Chaos. 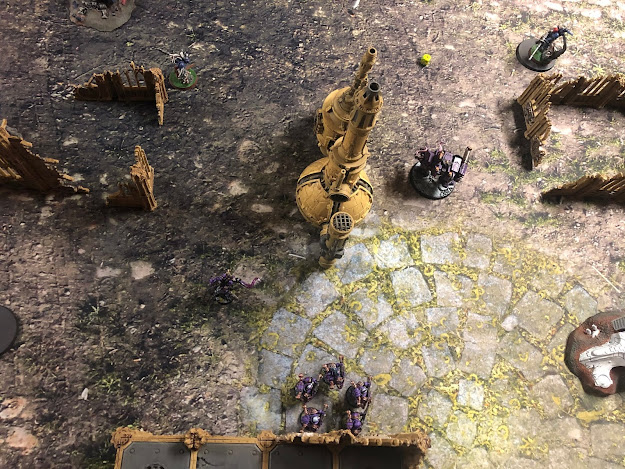 I did intend to take pictures each turn but as usual I got caught up in the game and chatting with Richard so I only managed to take a picture at the start of turn 3. Turn two was VERY bloody for both of us. His Lieutenant and Blade Guard moved in and assaulted both my CSM and Noise Marine units heading towards the dreadnought objective. My turn saw me continuing to have very effective shooting which removed the Blade Guard unit and a couple of the Assault Intercessors closest to me. My MVP, the Sonic Dreadnought then charged and killed the remaining Assault Intercessors leaving Richard with 1 Suppressor and his Lieutenant.
Turn 3 saw him charge my Sorcerer, easily killing him, and consolidating into my single remaining Noise Marine unit at the bottom of the board. On my turn I fell back with the Noise Marines (to keep them alive!) and sent my Sonic Dreadnought at his Lieutenant. Between his shooting and melee (after making the charge!) I was just able to kill the Lieutenant by one single failed armor save! We called it there as he only had the one Suppressor remaining.
My closing thoughts: First off Richard is a great opponent and a lot of fun to play against. I think we both like the cinematic feel the game can present and we both just want to have a good time throwing dice. Thanks again Richard! Secondly I really like how the game plays now compared to how it used to. It has the same game round sequence as AoS now, so it felt quite familiar right out of the gate. I definitely plan to play again soon and will do another recap for sure. We chatted about potentially starting a narrative "Crusade" series of games out of the new rule book and that looks to be fun as damage and casualties etc can carry over from game to game and your characters can gain warlord traits, units gain experience etc.
After I get some more Seraphon completed (Stegadon #2 will be done by the end of next week!) I will take a short break from them to re-base and touch up my Emperors Children as I already have a full 2000pt force that's assembled and painted. I still have the Indomitus box sitting unopened with what looks to be about 1000 points of both Necrons and Space Marines that I will ponder what to do with.
Until then - Ca$h out!
By CA$H at September 11, 2020