Matt and I had another set of Mid War tester games.   This is game 1.   We played 71 points, as that is what Cdn Nationals will be Sept 2018.    Matt is waiting for Eastern Front lists, but is just using the DAK Panzer Ko. for now until that comes out.   I went with my trusty Desert Rats, we rolled Breakthrough, with me defending, as I had an Inf. Formation in my Force    As always, Video Batrep at the end. 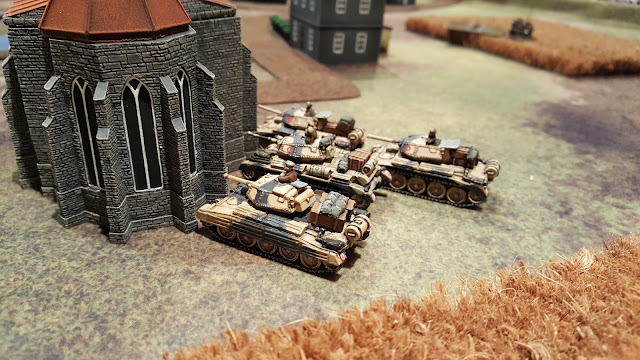 I put a unit of Crusaders in the 'empty quarter' of Breakthrough, and the rest closer to where his reserves would come in.  In hindsight, I should have kept all my tanks out of LOS to his AT10 guns and reacted to his first moves. 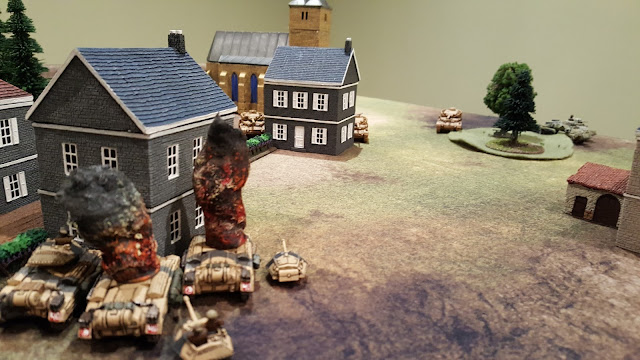 Matt on turn one would Blitz then Tactical his Panzer IVs and vaporise 2 of 3 Crusaders.  AT10 vs FA 3.   This unit would fail its Morale test and the survivors would flee. 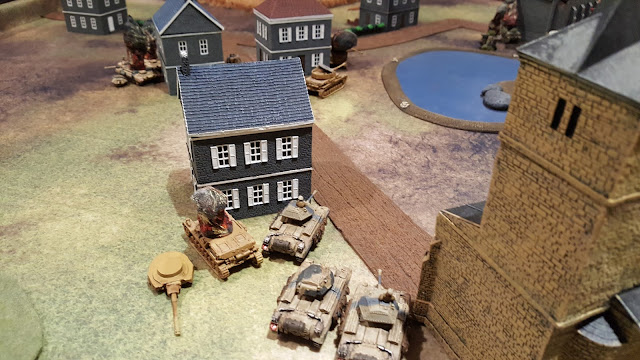 I move my Crusaders to his Panzer's rear.  At this point, I was firmly in V3 mode, thinking Tally Ho netted me 2 shots on the move if my targets were within 16.   No, it gives them 1 pip of extra skill or some garbage.


However my reserve Grants would clean up his main Pzr IV platoon, and my Ambush 6lbrs would clean up his flanking Pzrs.  While Matt would make his Formation test, and kill off the last Crusader unit, forcing the Grants to test for formation morale, (and fail) the new Mission Objective rules state that on turn 6, if the attacker has no models within range of the objective I win.

I think while Matt chose a very elite low-model-count list, the fact that spearhead on Breakthrough is limited means he should have put his 8rads in Flanking Reserves and had all 5 Pzr IVs on board to vaporize my tanks, then advance.   I forgot about the higher AT Crusader IIIs but also thought Tally Ho was still useful.. need to play more Mid War I guess!

Hope you enjoyed this battle report, below is the full video of it, and stay tuned for Game 2 that we played.