Recently I found myself on the road and happened to find a decent sized hobby store in Indianapolis. I was skeptical as to how much Flames of War stuff I would find there, in the past most stores that list Battlefront products rarely have more than a few blisters and some terrain kicking around. I can tell you from the moment I walked into games2d4 (Games to Die For) I was impressed, Jerry's store is well laid out, clean and most importantly customer friendly. I explained that I was from out of town and was looking for some pretty specific products. I went in there with the intention of picking up some German Sniper teams and seeing if they had the British 25 pdr. with the shirtless crew to match my desert crew and guns that are in my Australian army from North Africa. After some searching and some online checks, we tracked down the stock codes for the two items and found he did not have them in stock. I was only there another day or two, so ordering them in was possible but not practical in my case.

I was a little discouraged but not surprised, as these are older items and a little tough to find. Games to Die For has everything else! From army boxes, terrain, tokens and more stuff than I can list here. It's likely the best organized and stocked store I have been in. After talking for 20 minutes and going through the racks and shelves of FoW. Jerry mentioned that there would be a group playing a few games that evening and I would be more than welcome to come back and check it out. I was pretty excited the store would be open a little later as it would give me some time on EasyArmy back at the hotel to do some more research into a list I am putting together for an upcoming event. I looked around for a bit more and left empty handed, but had a pretty good idea I would do some shopping later on. Something else was going to be different about the games, the guys were going to be playing Early War, a time period I have no experience in, and was curious to see what would be painted up and on the virtual battlefield.

I went back to the store a little after supper to see what armies would be tabled and what the terrain would look like at new venue. I met 6-7 locals that are into Flames and have been playing a few years. I only remember a few names, as I was mostly there to watch and check out the games and go through the FoW to see what I could spend some money on. I caught the tail end of two games and talked to some of the guys to ask about their lists and take some pics of their armies. They had no issues with pics during gameplay and I was careful not to get in the way, as I know some gamers have issues with complete strangers around their stuff while games are going on.....it is war after all. 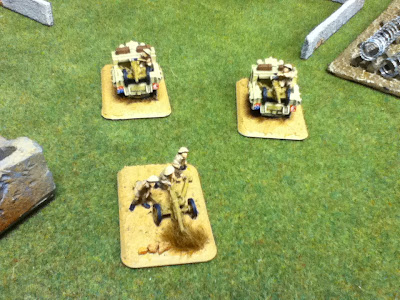 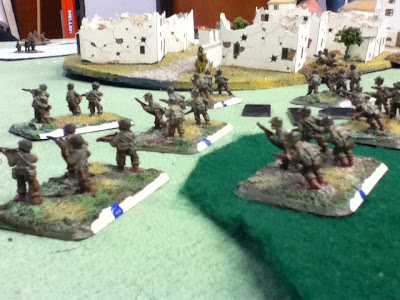 After the night's activities were through, I was invited out for wings at a place right next door to the store. I spoke with Jerry(Games2d4), Dave(a Scot who apparently only plays Brits), Rob, Chris and Terry(?) and a few more members of this group of friends that get together to play on a weekly basis. While I can't recall everyone's name that was either playing, or painting that night at the store, I had a great time watching the games and picking up a few things for myself. I ended up with a PSC Sherman/Firefly box, I'm thinking about Canadians for a LW list with the new Market Garden books out. Wittman's Tiger, Montgomery's objective marker and a German token dice set. In talking with some of them about hobbying and playing FoW, some of them base their vehicles on standard bases and then glue/attach magnets to the bases in order for them to stick to their metal army trays. I've never seen this in our group or any other of the larger events we go to in Ontario. While I prefer to have my tanks and vehicles off of bases as much as possible, I still thought it to be a cool idea. 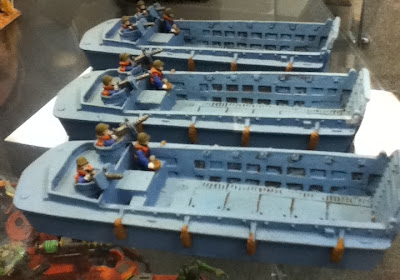 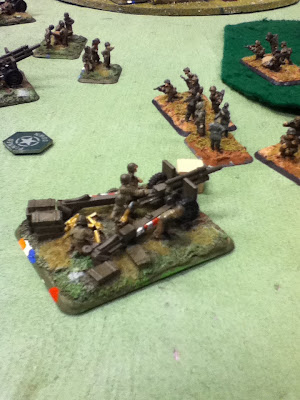 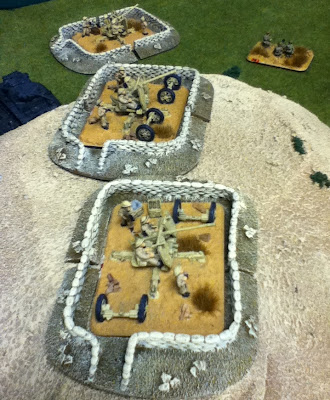 If you find yourself at this store, you won't be disappointed with the selection or service. Just to give you an idea on how 'friendly' this local gaming store is. Jerry offered up one of his own tank trays to me because I was looking for a specific one to carry my US forces in. I've never been a first time visitor in any store and been treated as good as I was. Chances are if you can not find something in this store to fill a void in a list, a book on your shelf or some new modelling knives, paints or accessories, it's very likely you don't need it. You can email, call or better yet visit Games to Die For in Inidianapolis, Indiana @ 55 South Raceway Road.
By Matty at March 14, 2013