I started work on my new Tactical Armoured Patrol Vehicles (TAPV) project the day that Canada announced which company would supply the new vehicles. That date was June 8.  Knowing that Gamesummit Skirmish was taking place on September 9th that gave me three months to have enough TAPVs built to field a new army for the tournament.  I already had a IG army based on the Canadian army in Afghanistan and I wanted to have a new army representing the Canadian army back home. That meant that I had to also assemble and paint troops in green Cadpat (Canadian Pattern digital camouflage) to complement the army in desert Cadpat.  I had this weird notion that I could show up at a tournament with two identical armies.  One painted for the desert and one painted for green or woodland terrain depending on the table I was playing on. When I saw that the tournament had a doubles component, I figured I’d be able to bring both armies to the tournament and play with them on the same table.  All I needed was a partner who didn’t mind not having to paint anything beforehand and just had to bring a measuring tape and dice. Matt Varnish volunteered and Task Force Courage and Honour was formed in honour of a former member of the Gamesummit forum. One half of the force would be Courage and the other Honour. We even had t-shirts made up.  The fact that between us we had only played three games using Version 6 rules didn’t bother us too much.  In fact, between us we only had one rulebook and the first time it was opened was at the start of the first game. 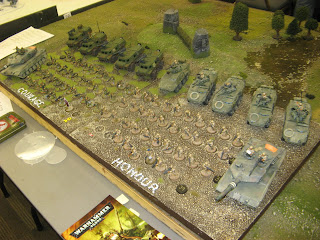 Our frst game was against Eric and Mario from Montreal.  They were a good team to play against and good thing that Dennis speaks French as much of the game was played in French. We killed lots of their stuff, but their reserves came in at the last minute and they beat us badly on objectives held. 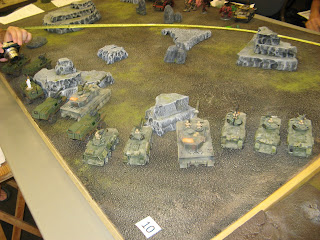 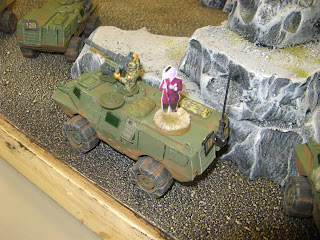 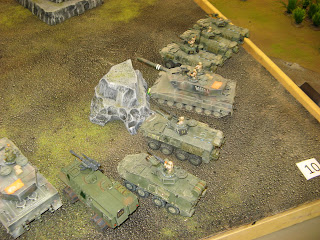 ﻿
The second game was against an eldar and dark angels team. We dropped way too many killpoints to have a chance. There were some cheesey rules with the distortion cannons and we just couldn’t do anything about them.  It ended up as a minor loss.
Our third game we won against two newcomers to 40K by destroying a good portion of their scoring units and they weren’t able to hold or contest any objectives. I think they both learned a few things and will be much tougher opponents in the future.  Major victory to us.
We won our fourth game against Dark Angels and Guard by a single point in a kill points game.  It ended up 16-15 for us and that was only because the depleted squads holding a couple of objectives made all of their leadership tests to hang on at the end of the game. We were able to knock out their Manticore missile launcher on the first turn and spent the rest of the game trying to knock out a whirlwind with no luck, though we disabled it and got it down to one hull point. Fortunately, when it did fire on the troops holding an objective at the end of the game it didn’t do much damage.  If we had known that we would have directed all of our fire at something else.
For some reason the opponents always seem to go for Matt Varnishes vehicles right away and he took a lot of casualties.  Good thing they left me alone and I was able to save the day most of the time.
Matt V was having some trouble with his dice rolling.  He brought his Flames of War Desert Rats dice and they were letting him down at times. I brought my Flames of War Canadian dice and they seemed to work a bit better.  Any time we needed a big roll, I’d take out the Canadian dice and we would shout “O Canada” as the maple leafs would show up, indicating that we had rolled a six.
Doubles was fun.  We got to meet more guys, play against more types of armies and the games could go relatively quick if guys were not shy about moving and fighting their partners troops when necessary to speed things up.
With two victories we somehow got tied for fourth for best general, won best painted, got second for best sportsmanship and ended up coming in second overall.  Not bad for a couple of guys who don’t play that often and didn’t know 6th Edition very well at all. 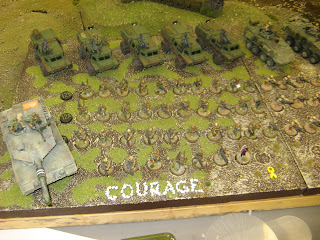 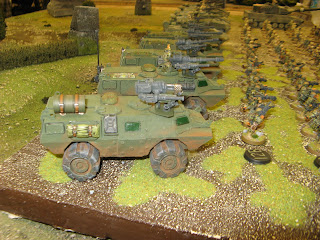