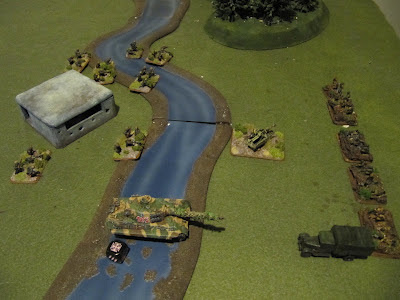 Can't believe its been 69 Flames of War battle reports already, I wonder if I can get the other 21 in by the end of 2012.. Anyways, this game was fought at Brent's wicked man-cave, which I give a brief tour of in the video below.
We decided to play some Late War, and I took my 21 Panzers out for a spin, having not touched them since Game Summit. I decided the odds were high of Brent taking his Guards Tankovy list, so I took the 3 King TIger list that did so well for me at the OMG tournament last year.
He instead brought an assault gun company led by Rat, so there were guns that could pierce the front armor 14 I had!! He also took 7-dice of Shturmovik. I reckoned in the first 2 turns I would lose a lot of points to air attacks, but the pilots would first have to learn how to read a map!
My list: King Tiger, Bergpanther,
King Tiger
King Tiger
3 panzerwerfers with extra crew
small unit of Pio's