We've been playing some SAGA lately, Tyler has his Danes on the go, Christian does Vikings, Andrew has Anglo-Danes, Tris has Welsh, Moser has Mongols, and Scott and Matty have the Milites Christi and Crusaders.   Loving the game so far, its quick to pickup but has lots of granularity from the battle board options.   Here is a game Scott and I had, and at the bottom, Bonus video of last week's game plus some Ravenloft.  Enjoy! 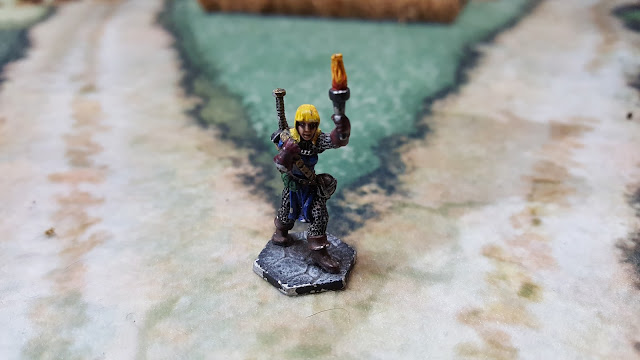 Blonde adventeress, both sides had to capture and bring off their board edge at M speed (sorry Cavalry!) The Milites maybe thought she had information on the Dead Sea Scrolls? while the scots were after her for probably more base reasons! 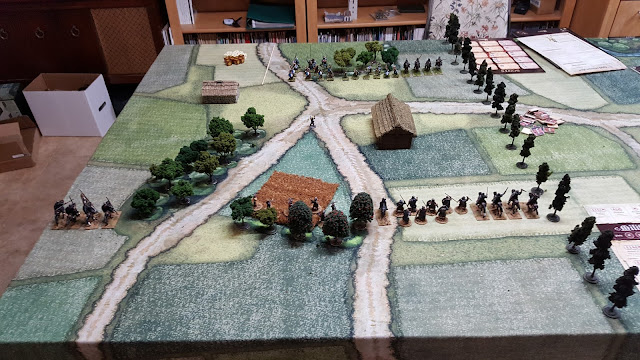 We were playing up to the treeline.  4 pts, Scots got to deploy first. 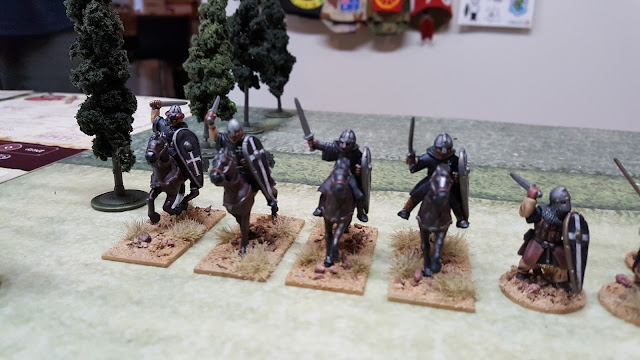 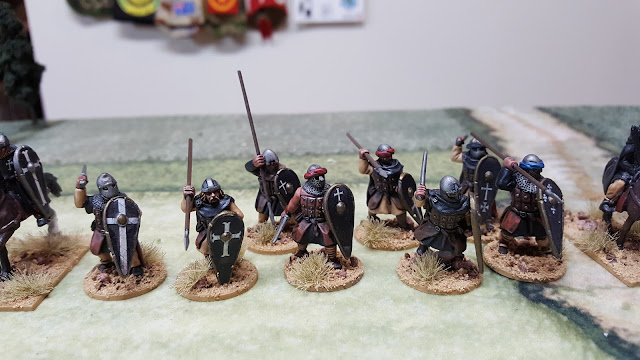 Warriors on foot with melee weapons 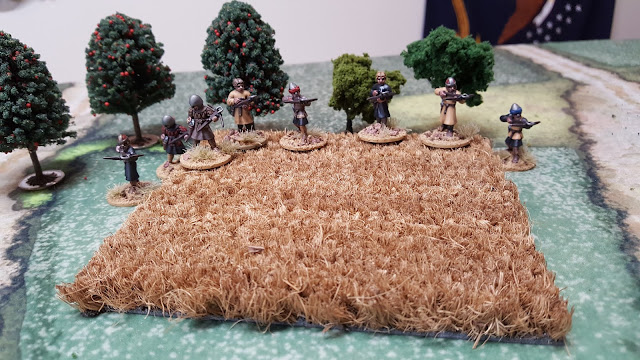 2nd Warriors on foot with Crossbows 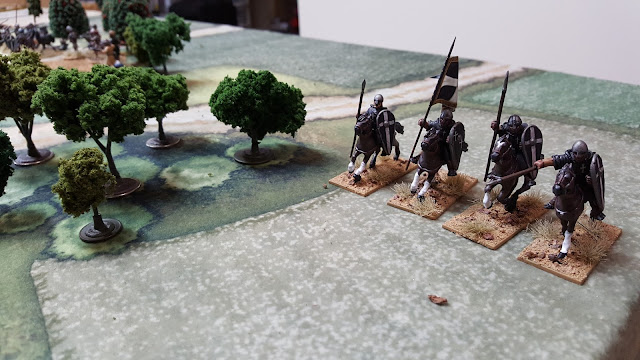 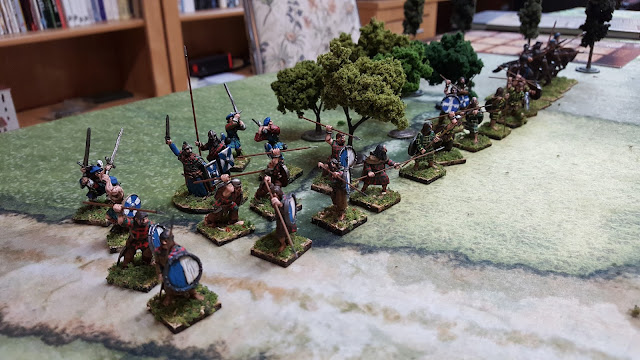 I was running my usual 2 warriors with Spears, 1 Thegns with Spears (Highlanders) and 1 mounted Thegns (Moss Troopers) 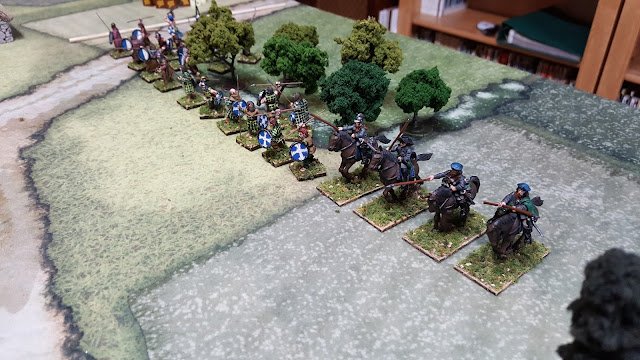 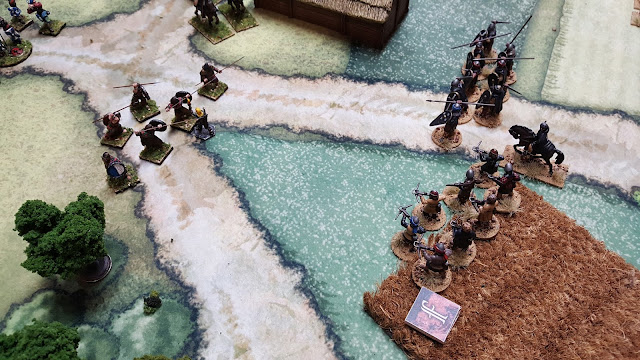 We diced off and I went first, using fatigue to get my spearmen and snatch the Wench!  Scott uses fatigue to move his crossbowmen up to shoot at my exposed unit, but I had set up my Battleboard to somewhat mitigate his shooting, still losing 2! 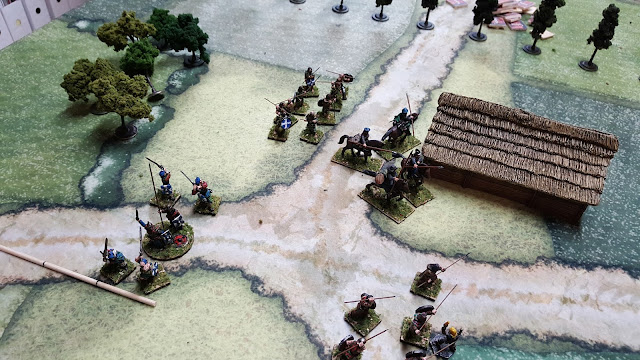 Moss Troopers up by the barn, my Laird and Thegns behind the warriors w/ Wench for support 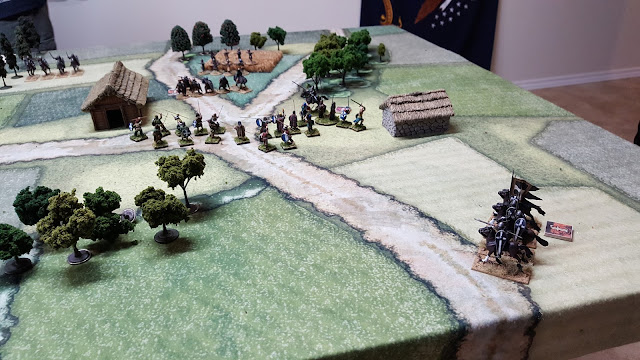 Those sneaky bible-pounders!  double move to be behind my retreating force while his crossbowmen reduce my cavalry to one Moss Trooper by the woods (far up the board, click to enlarge) 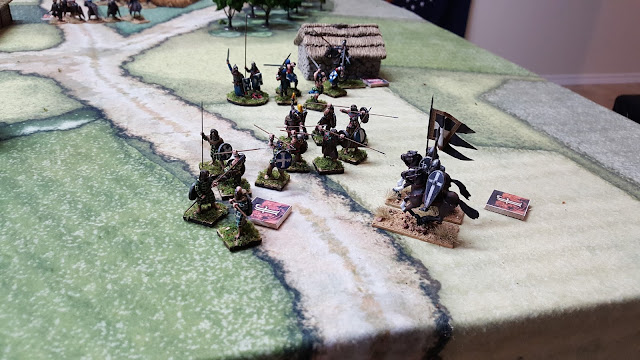 I get lucky and was able to use 'Reach' on a reindeer dice to activate 2 units to move then throw spears.   He is down to just 2 mtd Hearthguard in my backfield. 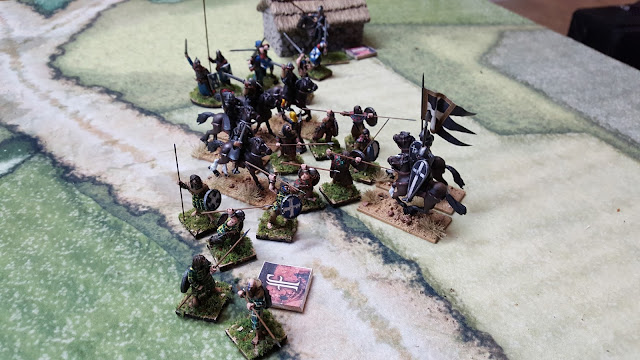 However, he uses some battleboard and Piety trickery to get both units of Mtd Hearthguard into the wench-guarding warriors.  Luckily for me, I had put a dice onto my battleboard for 'Without Mercy' which is a reaction vs his orders and I roll 3 SAGA dice and can put on my battleboard. 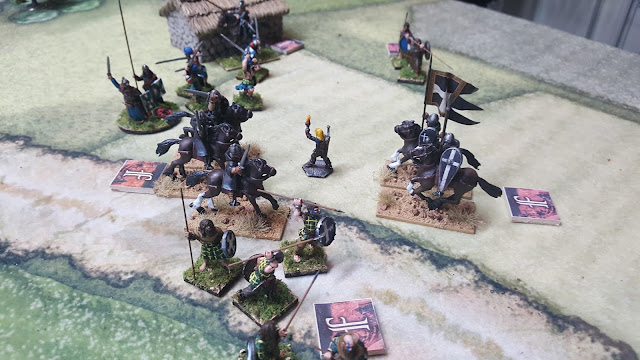 So instead of destroying my unit, I had enough defence dice to have 2 survive and fall back, leaving the wench free to be picked up by the God-Squad ! 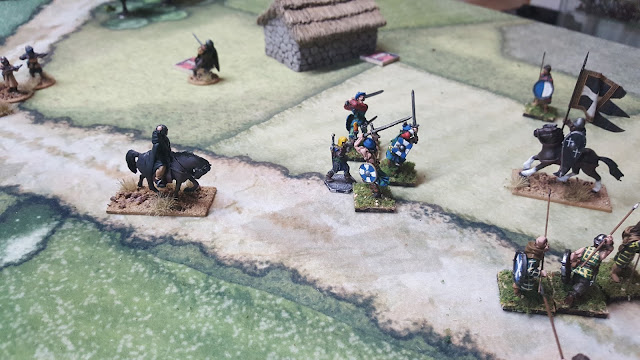 However, my Laird and Thegns would massacre the large unit of Mtd Hearthguard, recapturing the wench, and then my Laird goes down to more warriors and the balding Mtd Warrior priest counter attack.   My last turn, after some confusion, and with only 3 dice remainig (1 lone warrior, 4 in the other, and 4 remaining warriors, I am still able to walk the wench off the field.  Lost most of my army, but the good guys get the girl in the end?!?!?!

Video of this battle and below that, the Viking game +Castle Ravenloft.  Good times