Never to early to start a new Army: DAK 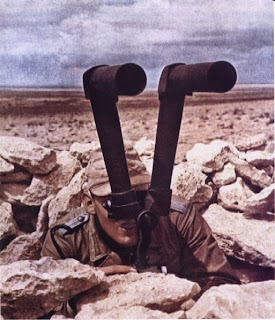 Achtung, Was is Los?

Yep, its been pretty quiet for me on the hobby front since July's excellent trip to Historicon.  However, with next year's Historicon already being announced that it will be Early War 1500 points (maybe 1550), why not start EARLY and get stuff done?  Enter, the Deutsche Afrika Korps, or the DAK for short.  I've actually had a lot of these models for years, for when I wanted to make a Mid-War opposing force for my Desert Rats, but just never got around to it.. things like my Free French project came up, as well as the 21 Pzr army for Late War amongst other things.   The DAK is a great army in that most of the models can be used for both EW and MW. 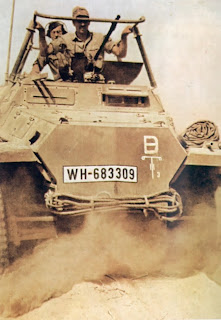 Iconic pic of an observer kfz250 from a 10.5cm battery

I'm going to try and document the building and painting of this army as much as I can, some for selfish reasons:  I can never remember what I use down the road, so if I document the steps and colours used, I can add units as I need them. 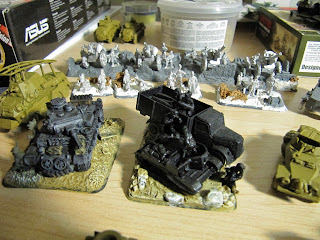 I've been pretty busy assembling, see below, my towed 10.5cm arty behind my 2 objectives.. 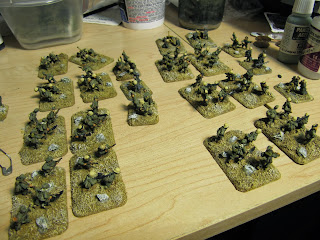 Pre-based, base-coated, awaiting Wash.
Whilst in this pic, we can see I have opted to do the grunt-work of Infantry first.  I always find the infantry is the toughest hurdle for me.    Above are 2 units of Schutzen, with added AT Rifles, Panzerknacker, Light Mortar, and either a pBz41 AT gun or Puppchen.   Add in combat attached MG-34s, and we get some beefy veteran platoons which can form the nucleus of pretty much any list.  I have yet to nail down the colour scheme for my Infantry, though for Basing, I followed the desert basing guide from the FoW site.   I still have to do a wash then highlight with the proper colours.  But for now, they are playable!  And thats what matters.

Catch you guys later this week with an update.. it may or may not have anything to do with FbB getting my order of Pzr IIs in earlier this weekend!