This week on the virtual battlefield, it was an all Infantry affair as I continued to test Rob's Canadians for the upcoming 2013 Historicon tournament. We rolled up 'No Retreat' as the mission. Seeing as we both field foot footsoldier lists, we had to roll over who would attack. I came up with the higher number after Rob rolled a big fat 1. After choosing which end he would defend, we began deployment and objective placements. Enjoy the video of the game and I happened to take some pics as well covering most of the action.

Looking at the board layout, Rob chose the best side from which to defend. No matter which way I wanted to approach from, there were going to be a lot of slow moving anti-tank guns and bog checks moving 4" at a time in order to get range on those dug in Canadians. I have to say after being bombarded nearly every turn, rocket batteries are the way to go for maximum effect on target.

I had a hard time breaking through all the terrain to get my guns going during the game. Rob did a good job of deploying his reserves to prevent my Tigers from over running his rocket battery positions at the rear of the table. His 6 Pdr guns in ambush made quick work of my Tigers, destroying two while they tangled with his Shermans and Fireflys.
I hope you enjoy the video, it was not as shaky as the last one and I captured most of the turns with all the 'key' action. I won't tell you how it ended, but there certainly was a lot of back and forth between both sides during this game. I have also been working on a side project for WWPD that should be made public shortly, I have some things to discuss with Steve, and I look forward to his feedback and going ahead with letting WWPD nation into what's transpiring. I think a lot of other people will be excited about this as I have been putting it all together.

I'm also hoping that those of the WWPD Network affiliate sites have a chance to get together 'post-podcast' at Historicon. I'll be looking into a place where we can maybe get to and have a drink or two and share some war stories and meet others that make the WWPD what is, the best community for Flames of War! I am making significant progress on my US Para troops and all their support elements. Here is a latest pic of on of my LMG stands, just so I have something other than a rifle/mg and command team stands being posted over and over again. 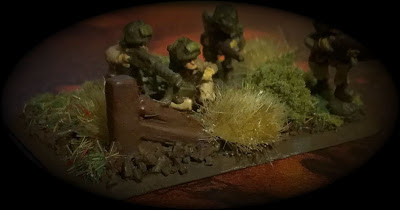